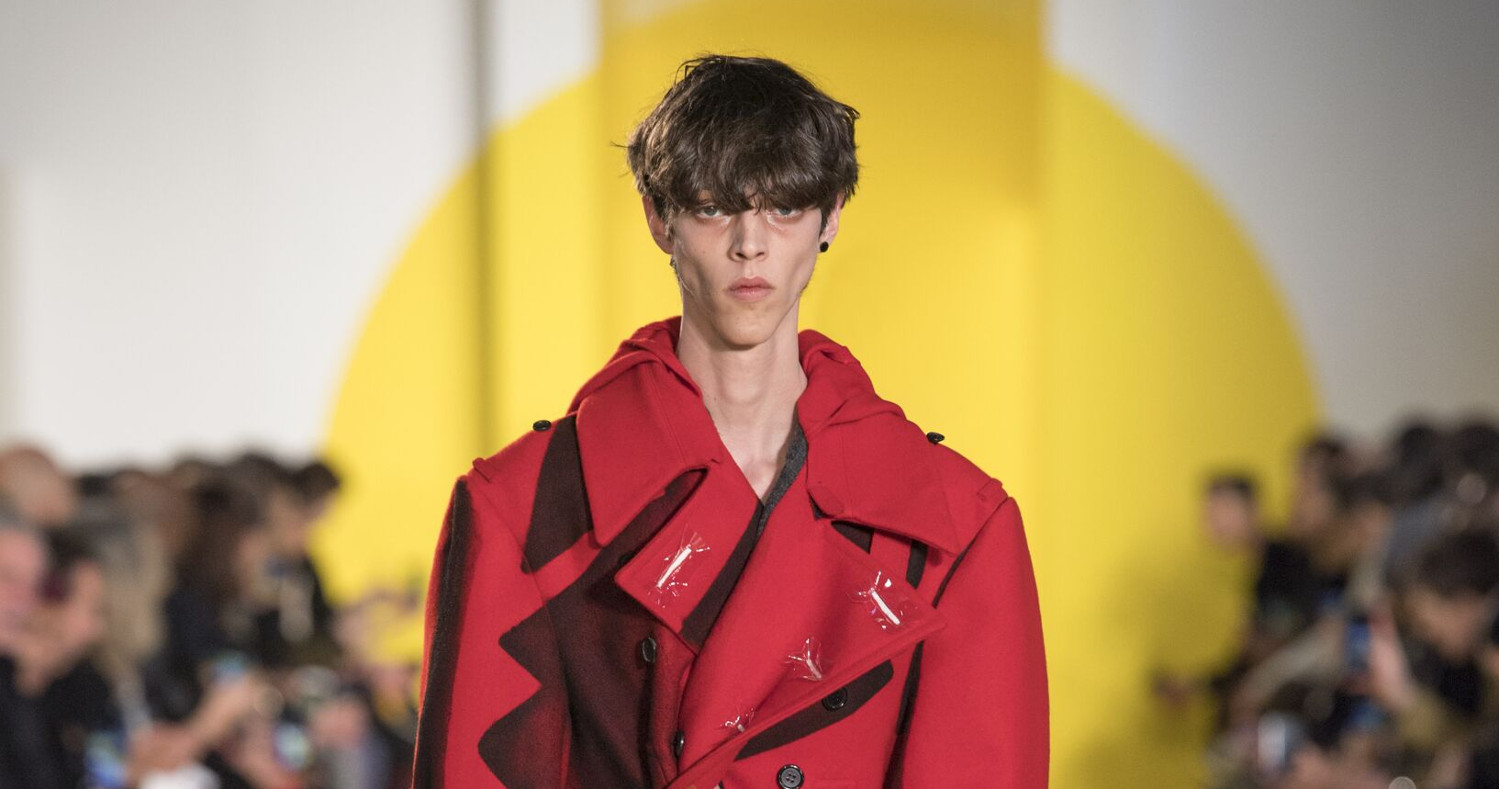 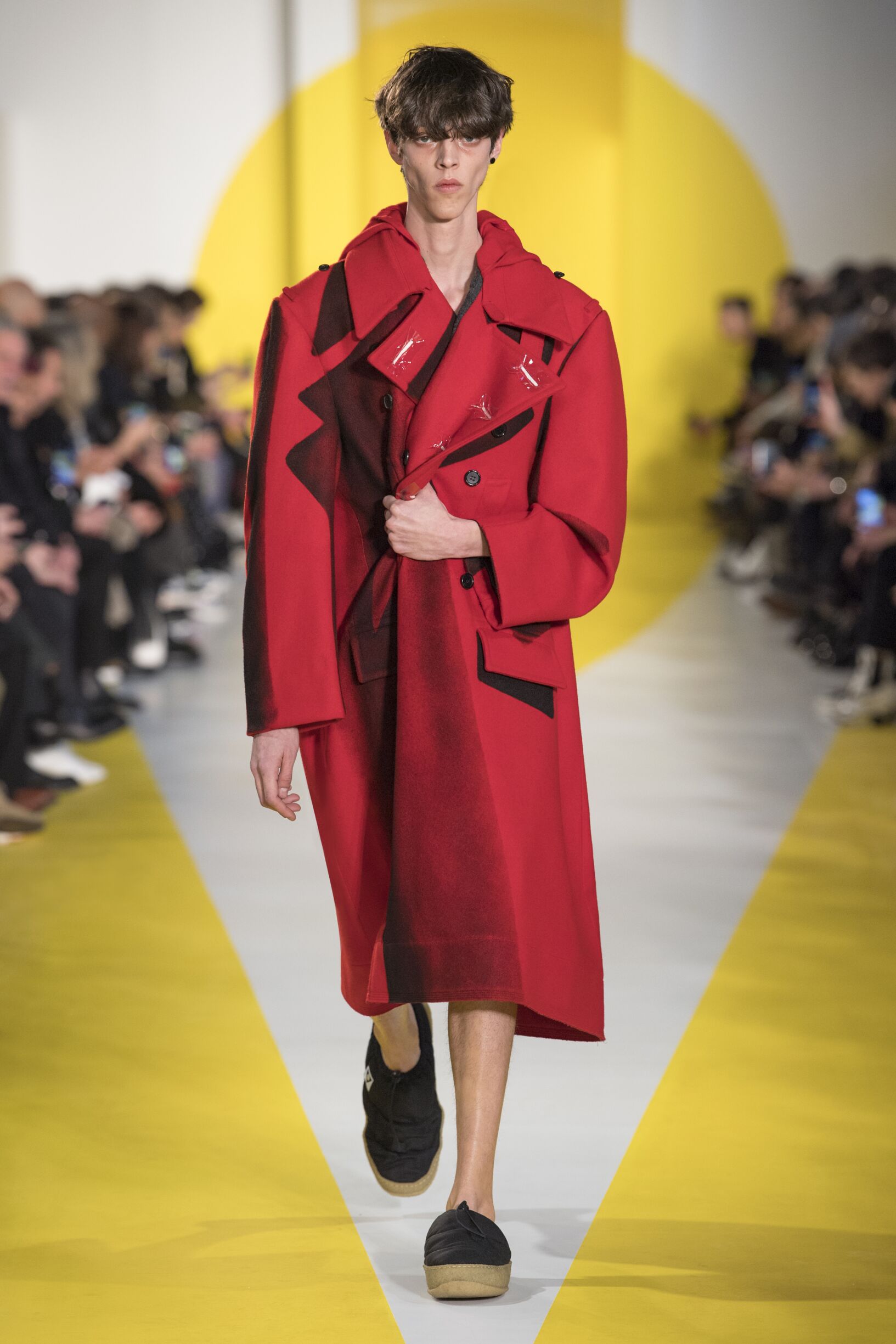 Synergy happens when several codes are unified in one new language. In his first menswear collection at Maison Margiela, creative director John Galliano joins together classic symbols of the men’s wardrobe by applying past and present house ideas into one forward proposal for a new glamour. An overcoat is hacked up into a jacket, a trench coat is spliced with a formal coat, while others are reduced to their core using the décortiqué technique.

The concept of dressing in haste, established in the Artisanal line, is at the core of the Fall Winter 2018 collection informing cuts. Humble menswear staples such as the greatcoat, the nylon sports jacket and the cable knit are re- positioned and collaged with sartorial heritage tailoring. Appropriating the inappropriate, an Aran knit cardigan appears in all-rubber. A navy bomber is flocked with shadow effects that imitate wear.

Introducing Artisanal pieces to the Maison’s menswear, a relaxed suit is cut on the bias, an innovative first for sartorial dressing. The show is presented on the backdrop of a synergistic glyph, a new symbol imbued with a positive message for the house and echoed in the décortiqué back of a Mackintosh coat. Known as the SMS, the Security Margiela Sneaker makes its debut alongside heeled men’s Tabi boots and menswear interpretations of the recently launched Glam Slam bag.

‘New comprehensions of glamour are the modern-day synergy of dressing; desires that bind us together across identities and wardrobes.’ – Maison Margiela

Fabrics native to the men’s wardrobe such as Harris Tweed, herringbone, flannel and a wealth of wools are contrasted by the artificial nature of rubber and poly-urethane. Polyester gabardine and nylon nod at sportswear while leathers and knitwear draw on menswear classics.

Tailoring takes centre stage, from sartorial 1940s silhouettes and military cutting to rare and mercurial bias-cutting using properties from the Artisanal line. Transforming traditional tailoring, staples from the men’s wardrobe are spliced or hacked up for new expressions. Maison Margiela’s term for cutting up a garment to its frame, the technique of décortiqué is applied to coats and knits. Rubber is moulded to imitate knitwear. Flocking simulates shadow play, while pigment print adds painted-over effects.

Drawing on the traditional men’s and military wardrobes, black, navy, charcoal and melange grey set the tone for the collection. The muted colours are interrupted by Klein blue, red, bright yellow and orange, hinting at the palette of sportswear. The presence of white cements the Maison Margiela signature.

Rooted in heirloom jewellery, rhinestone chokers and military buttons worn as brooches correspond with the memory of medals, cast from rubber moulds. Bracelets and belts are graphically coloured in leather, foiled leather and transparent PVC. Chains appear as belt and necklaces, while one necklace carries a cravat as medal. The collection introduces the SMS, the Security Margiela Sneaker: a steel- toe-capped trainer with a vibram sole, in white, black, red, yellow and blue. The puffa slipper is constructed in waterproof cordura nylon with a crêpe gum sole, while décortiqué cowboy boots and the Tabi – flat or with a six-centimetre heel – underline house codes. 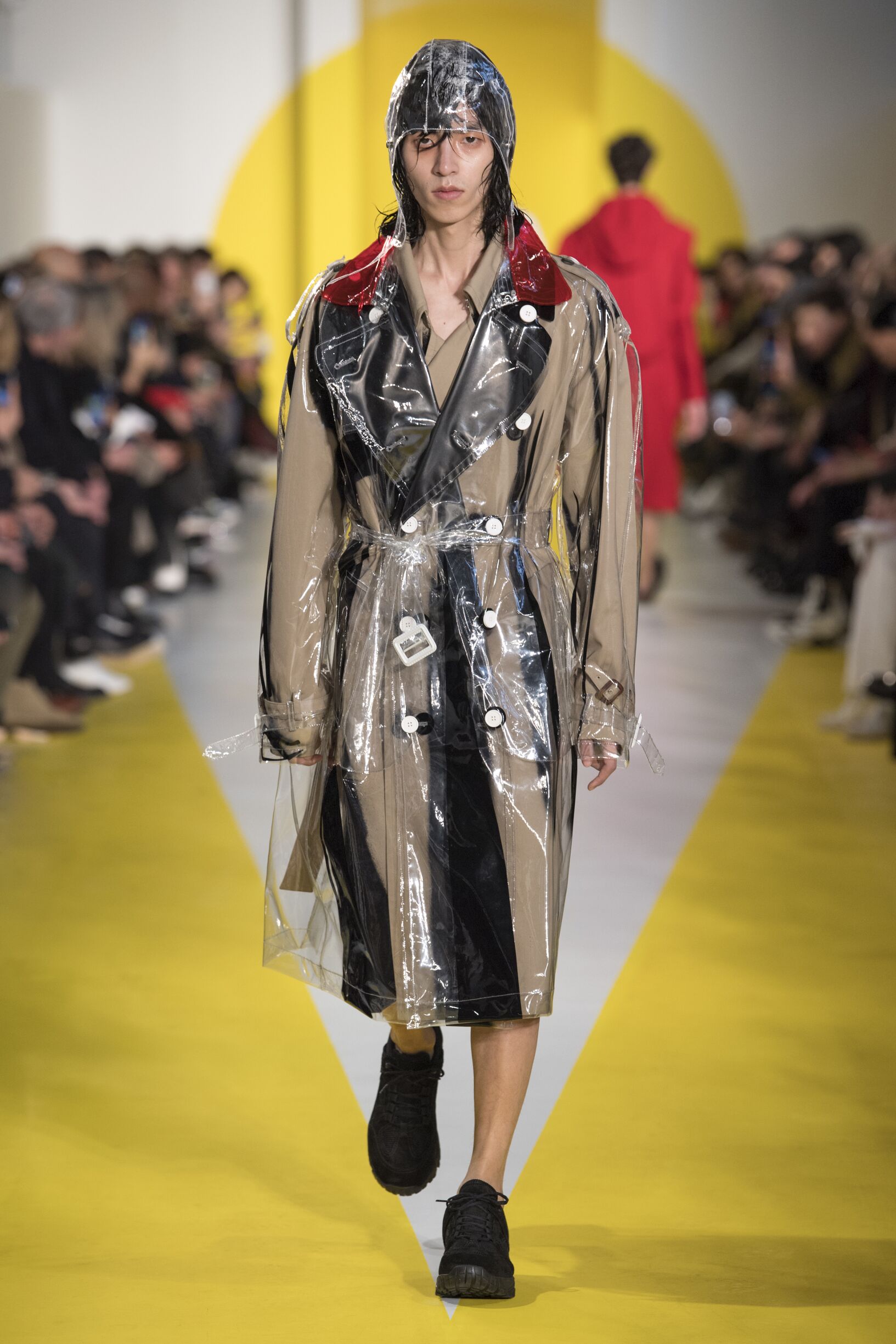 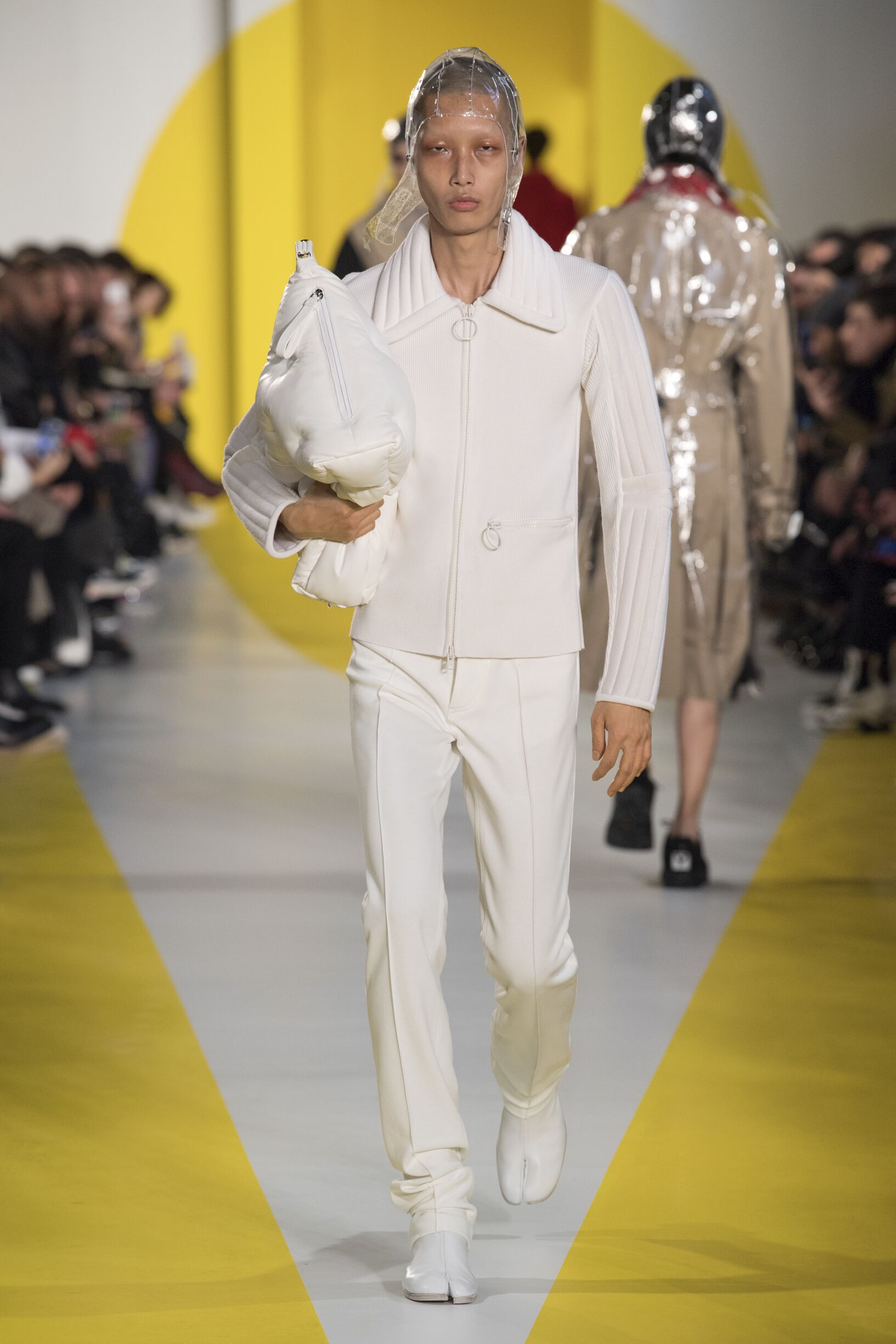 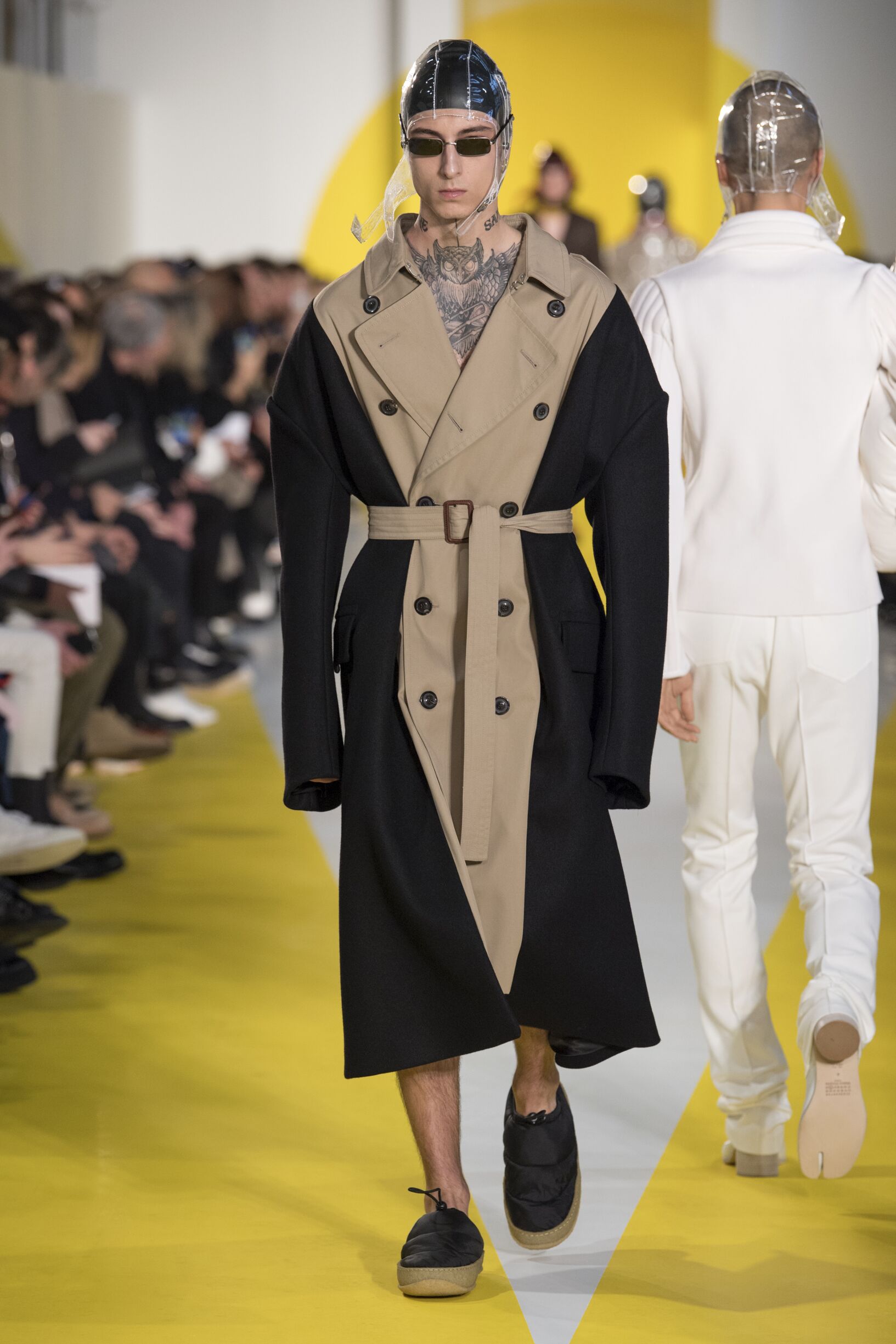 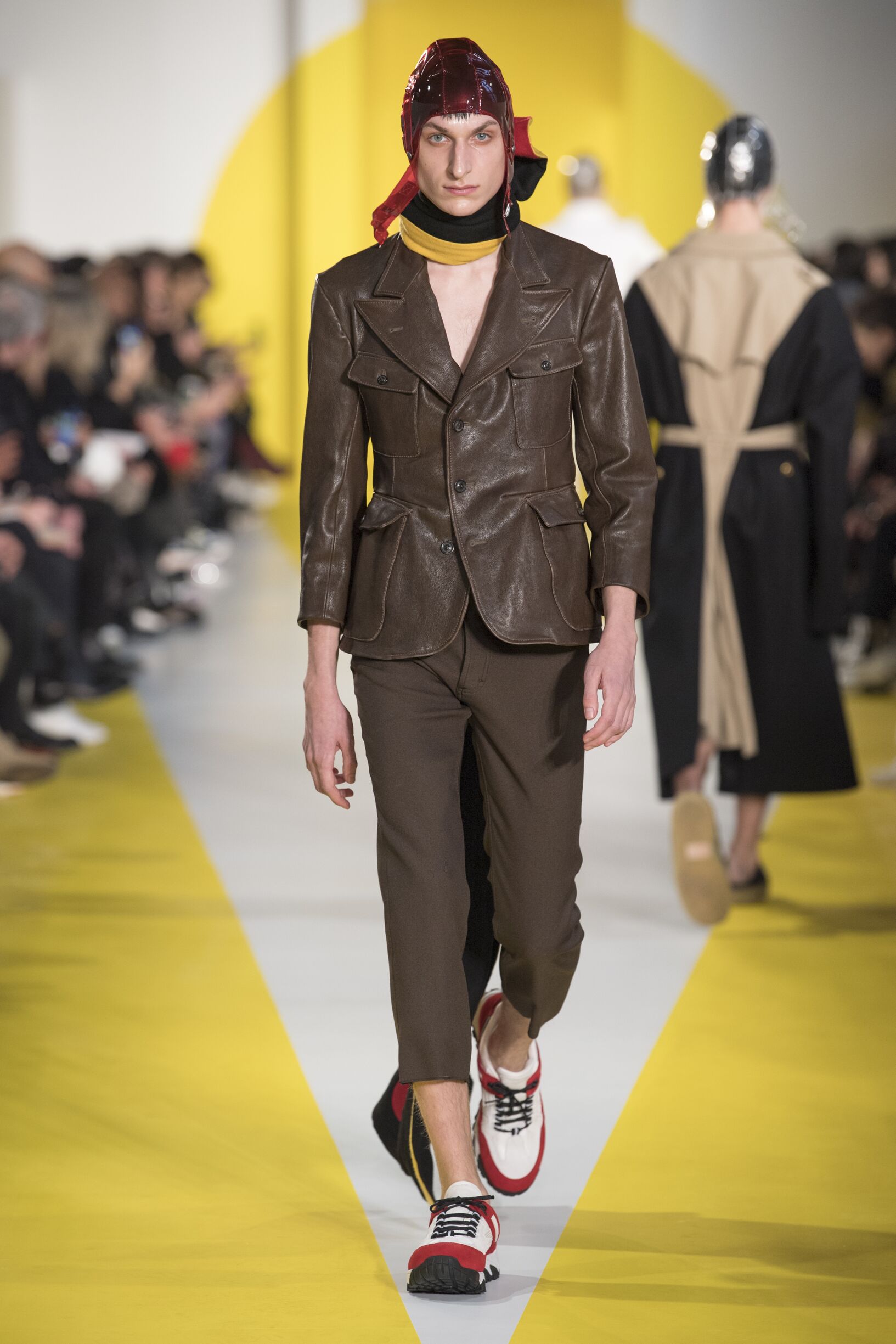 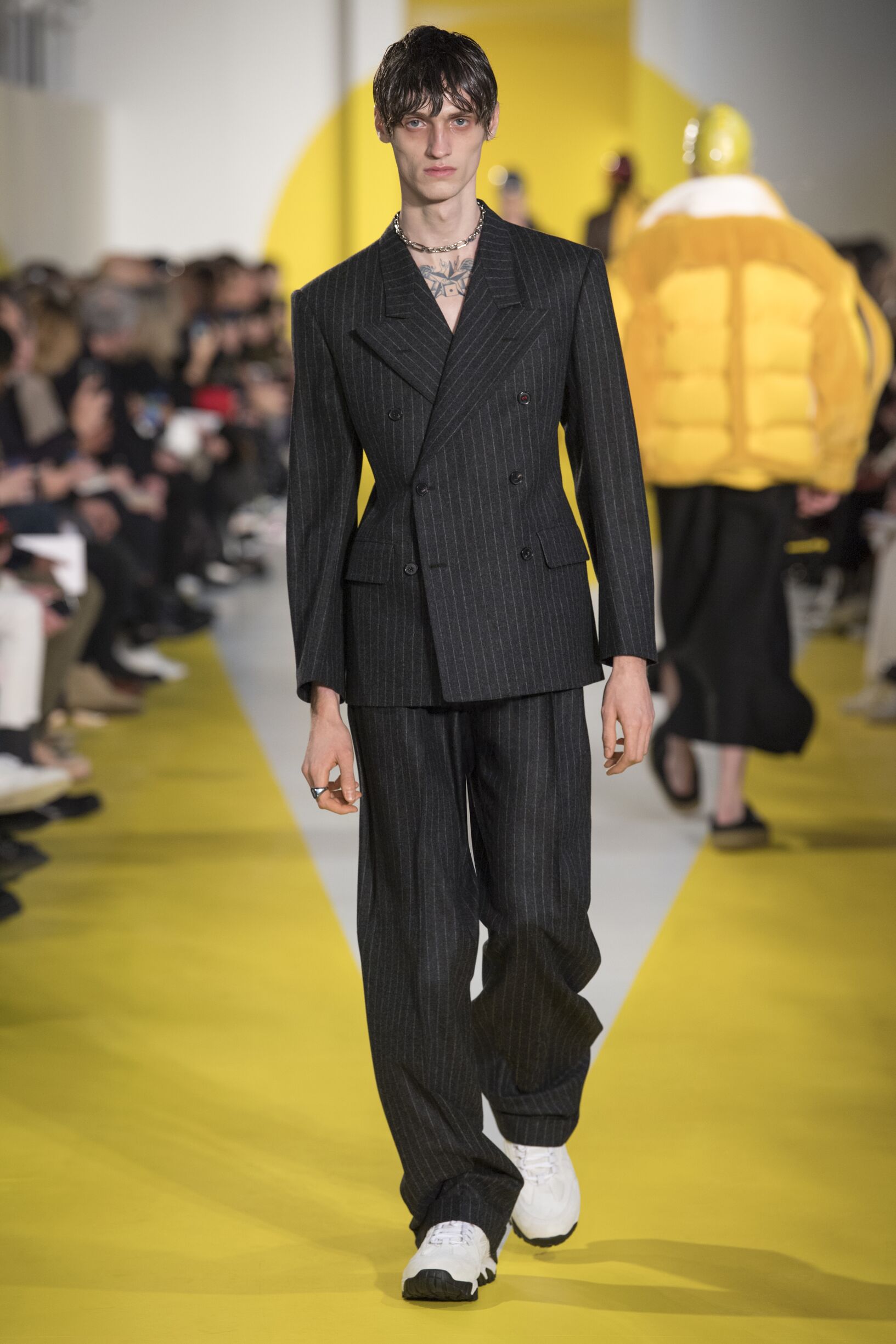 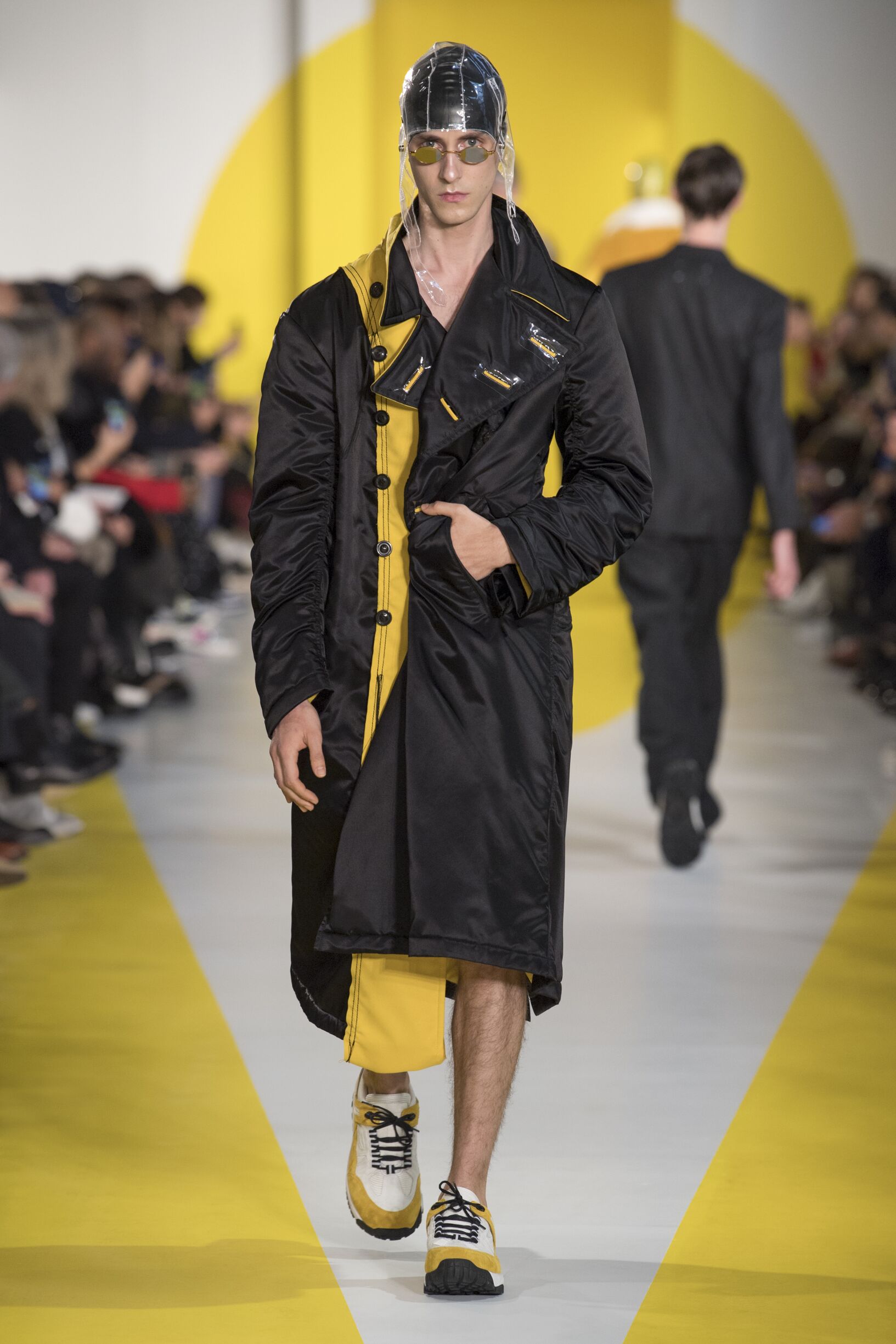 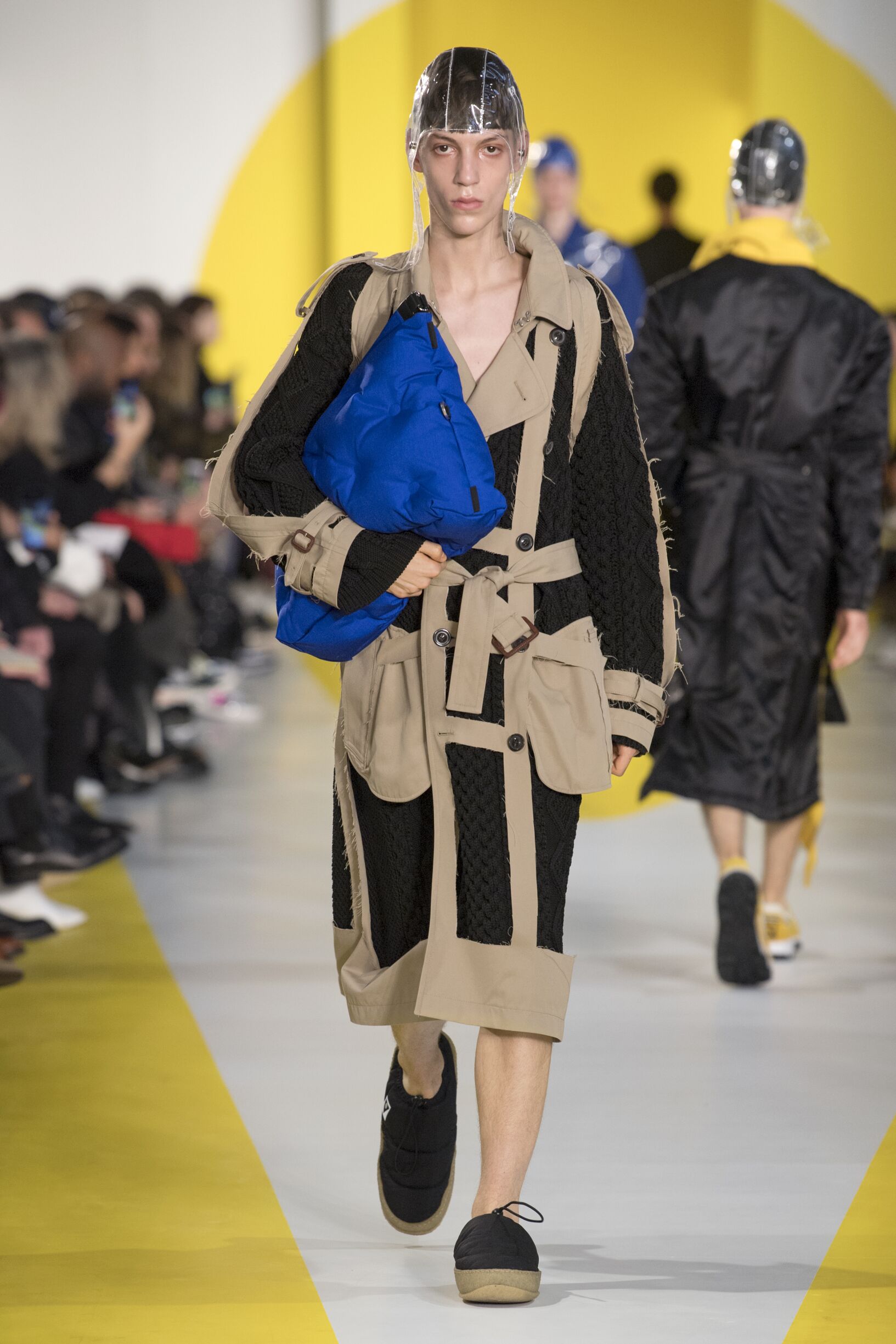 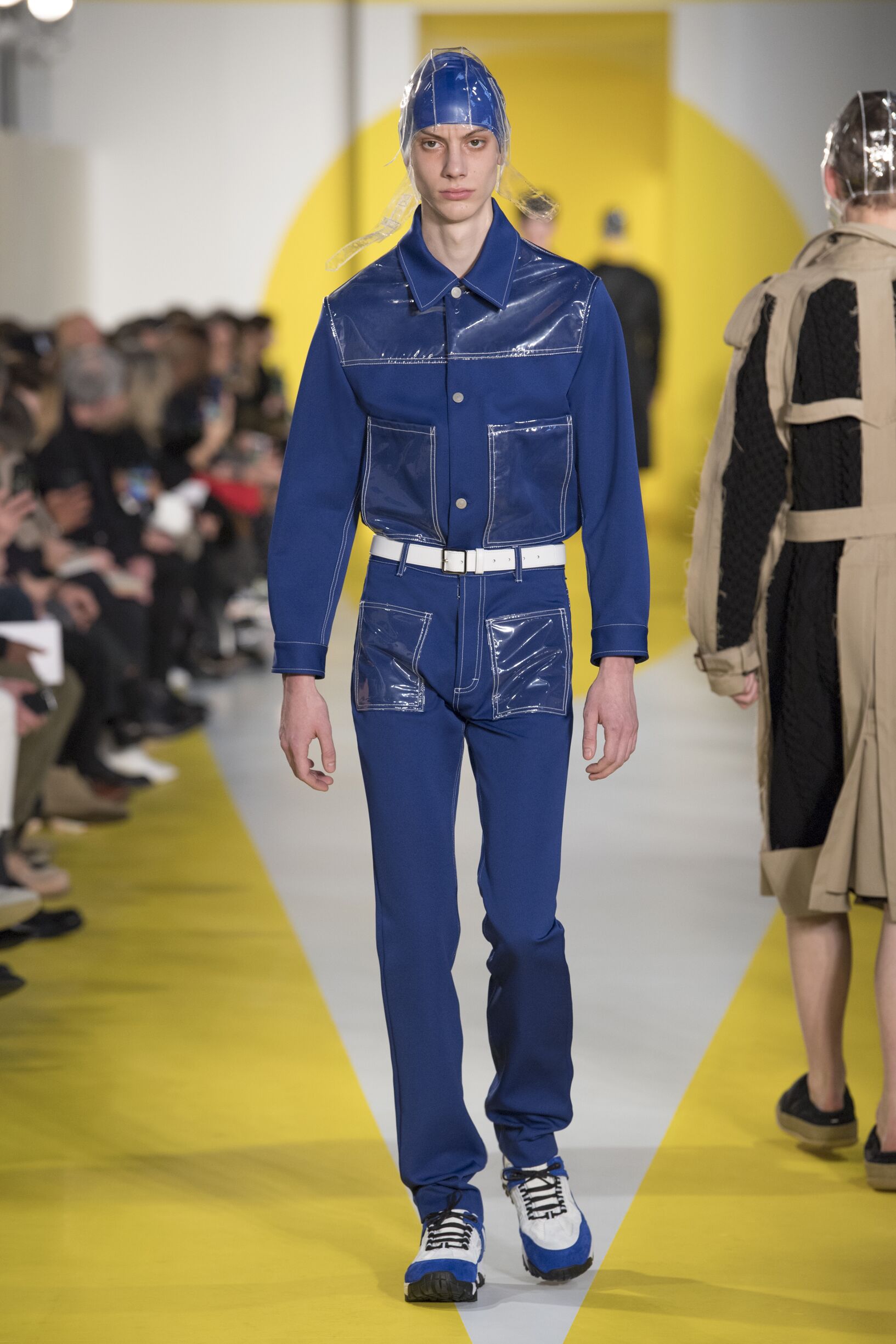 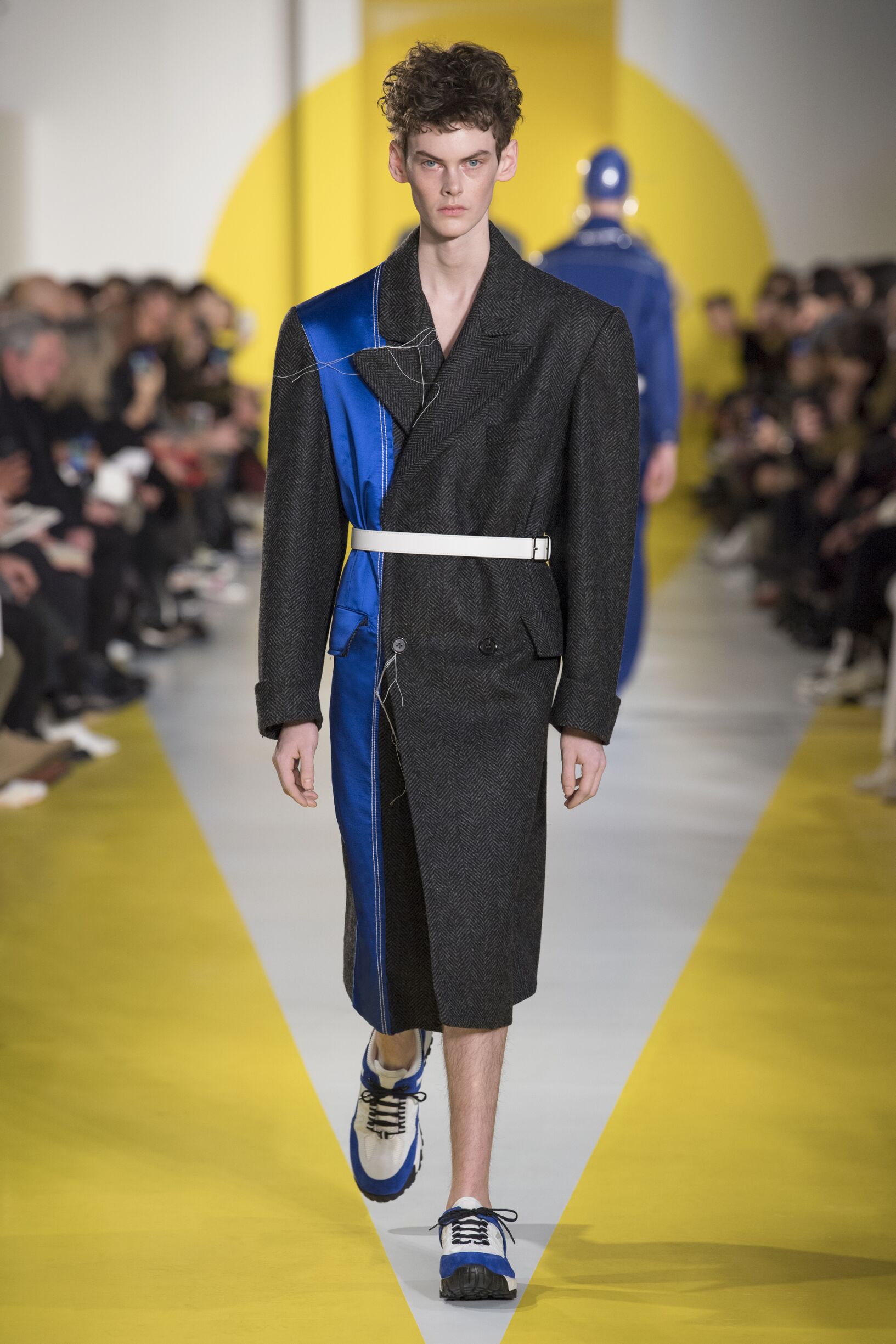 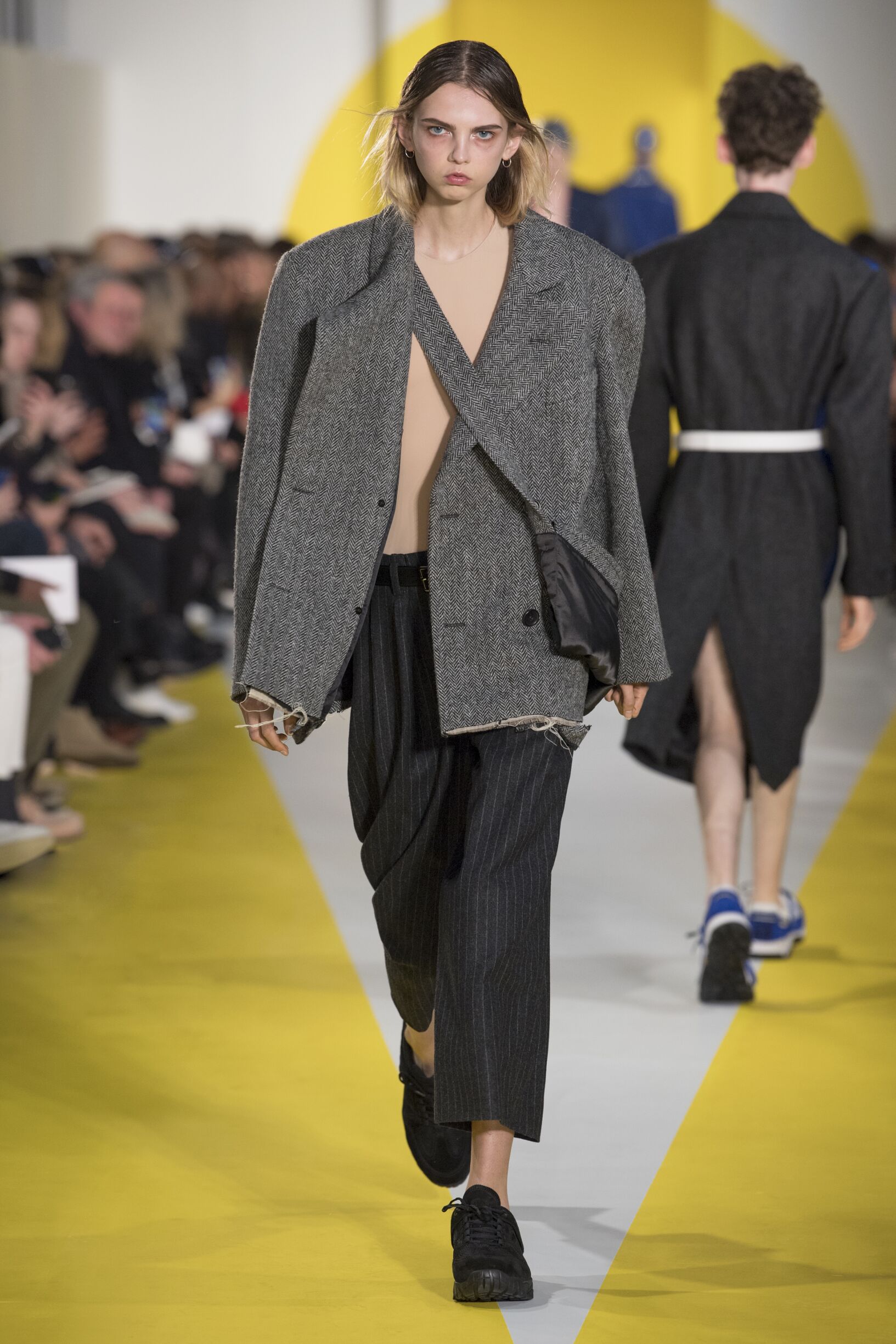 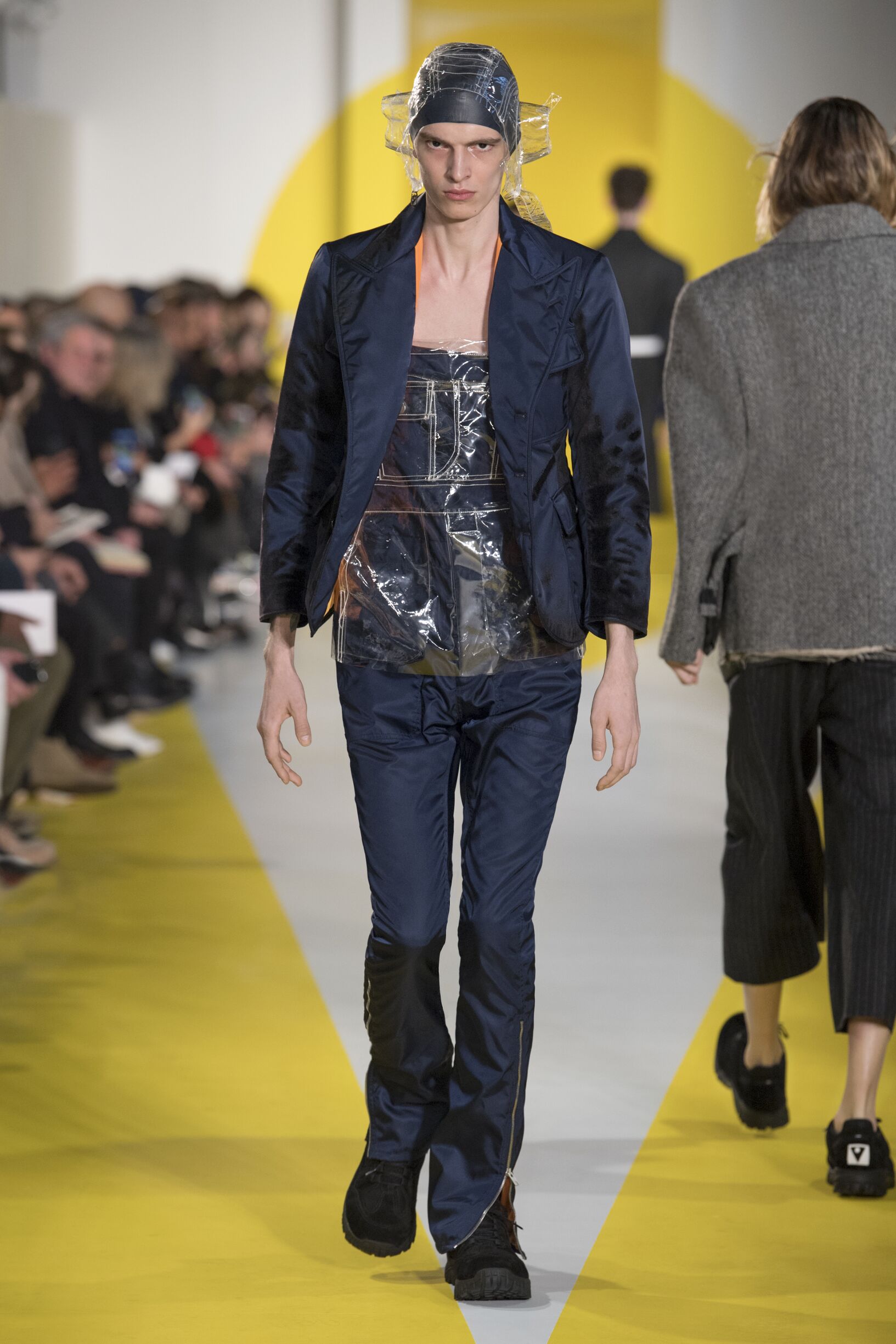 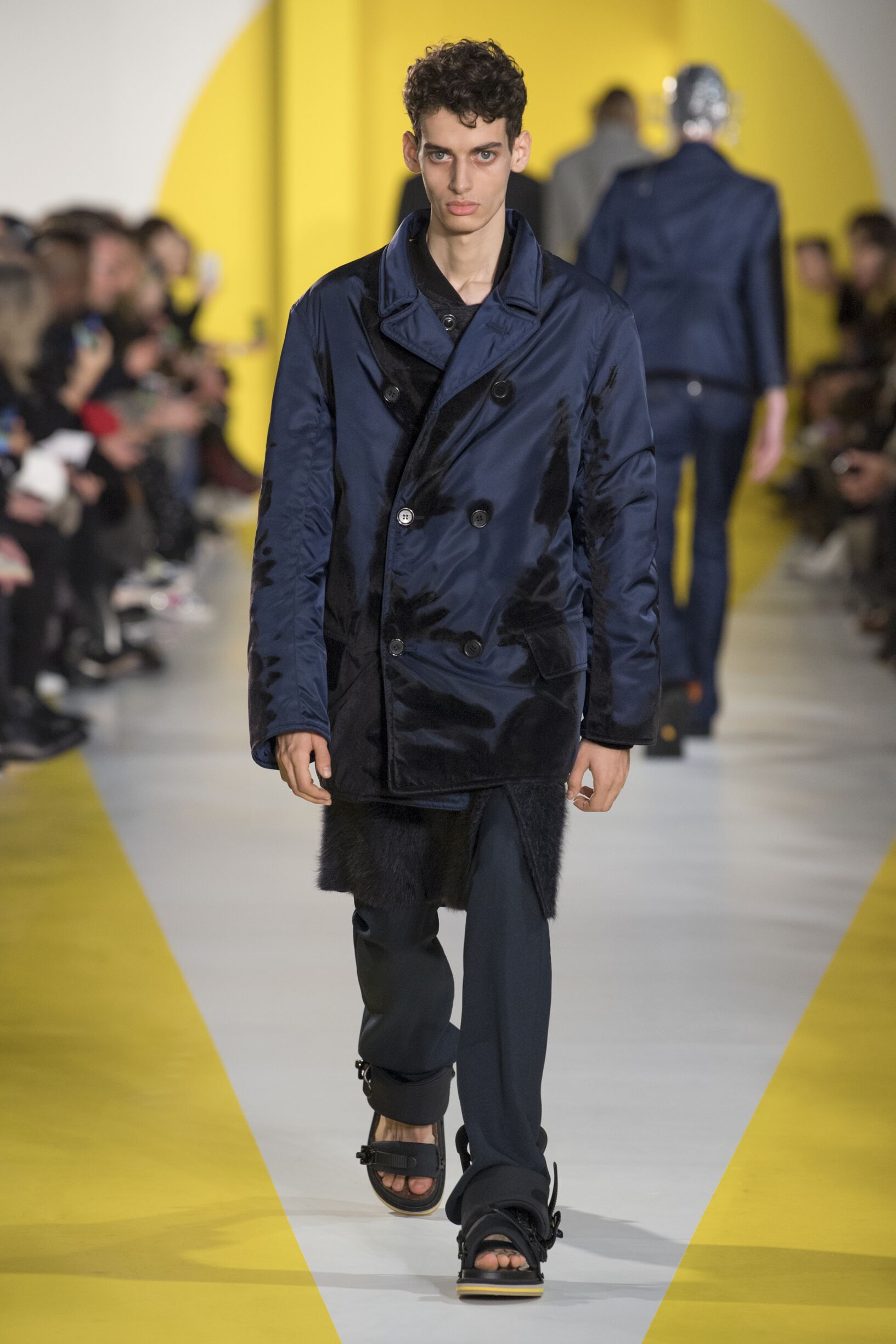 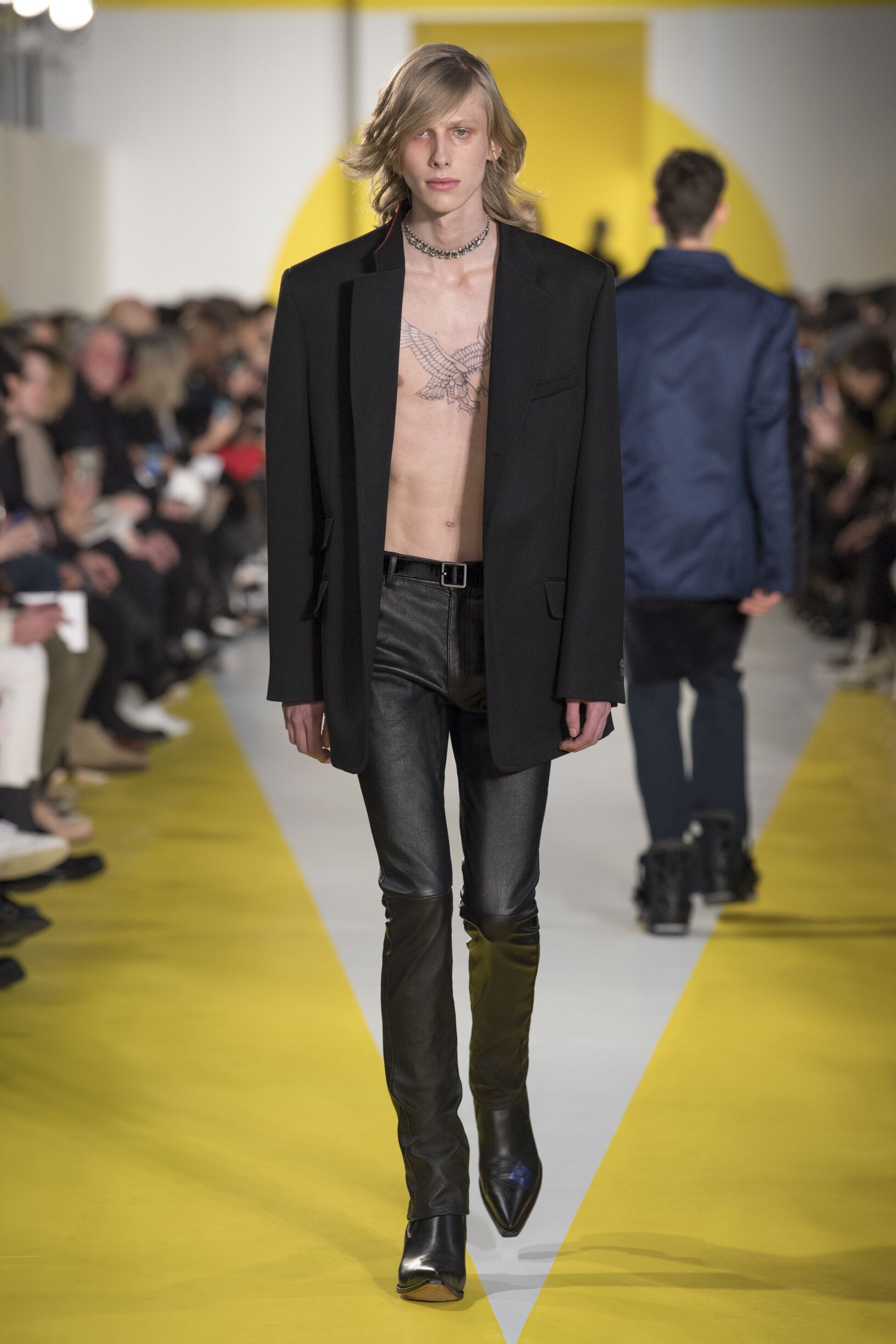 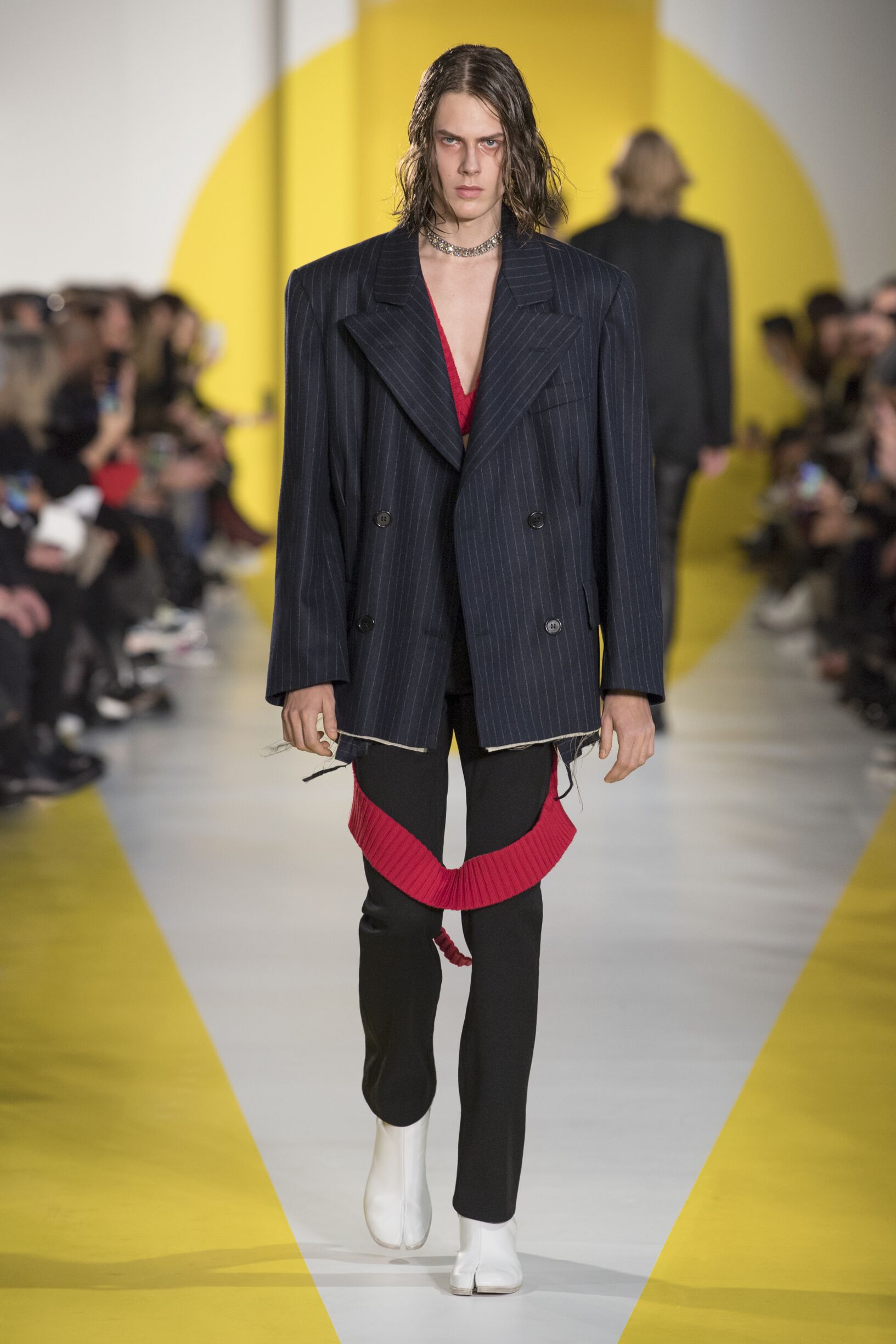 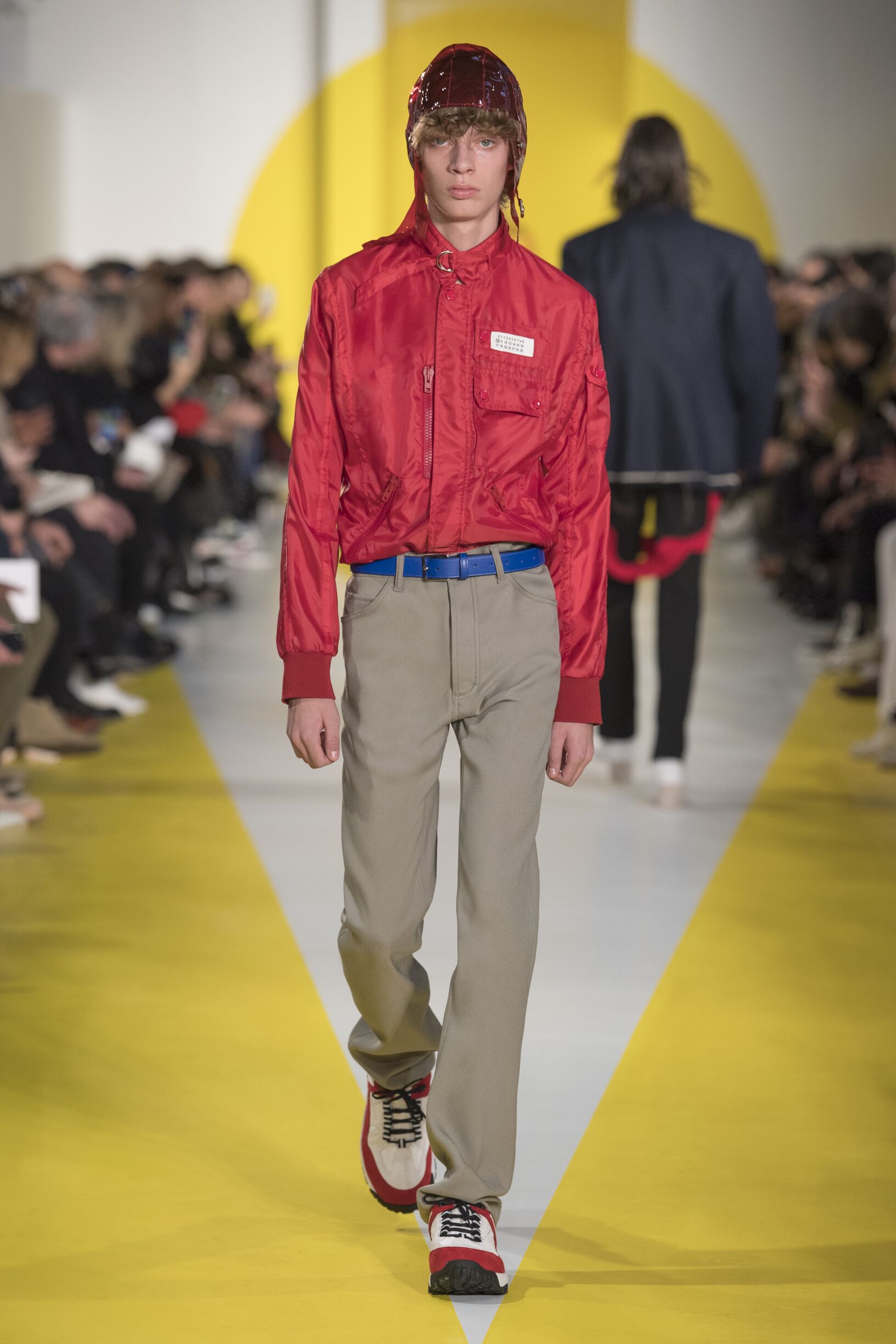 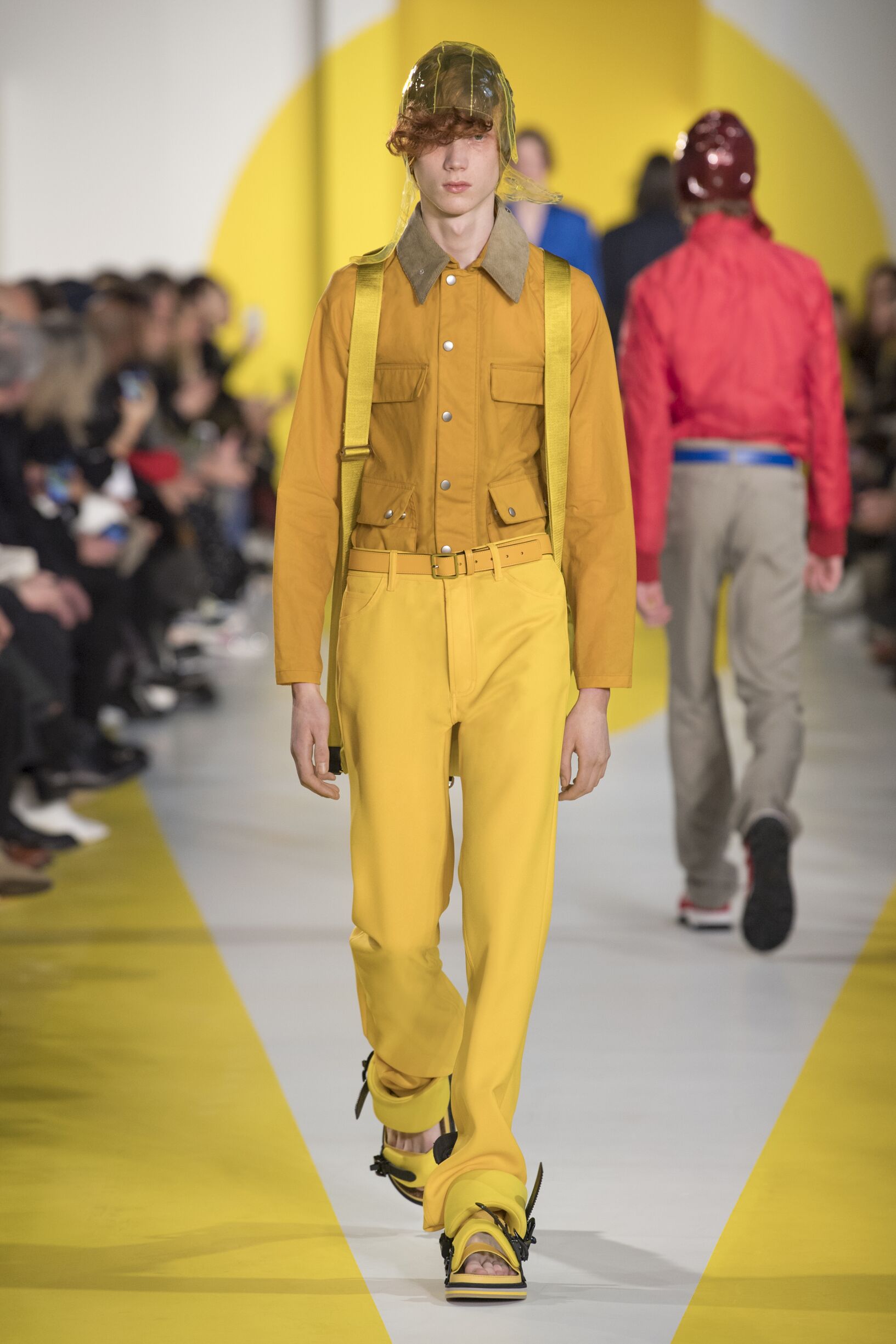 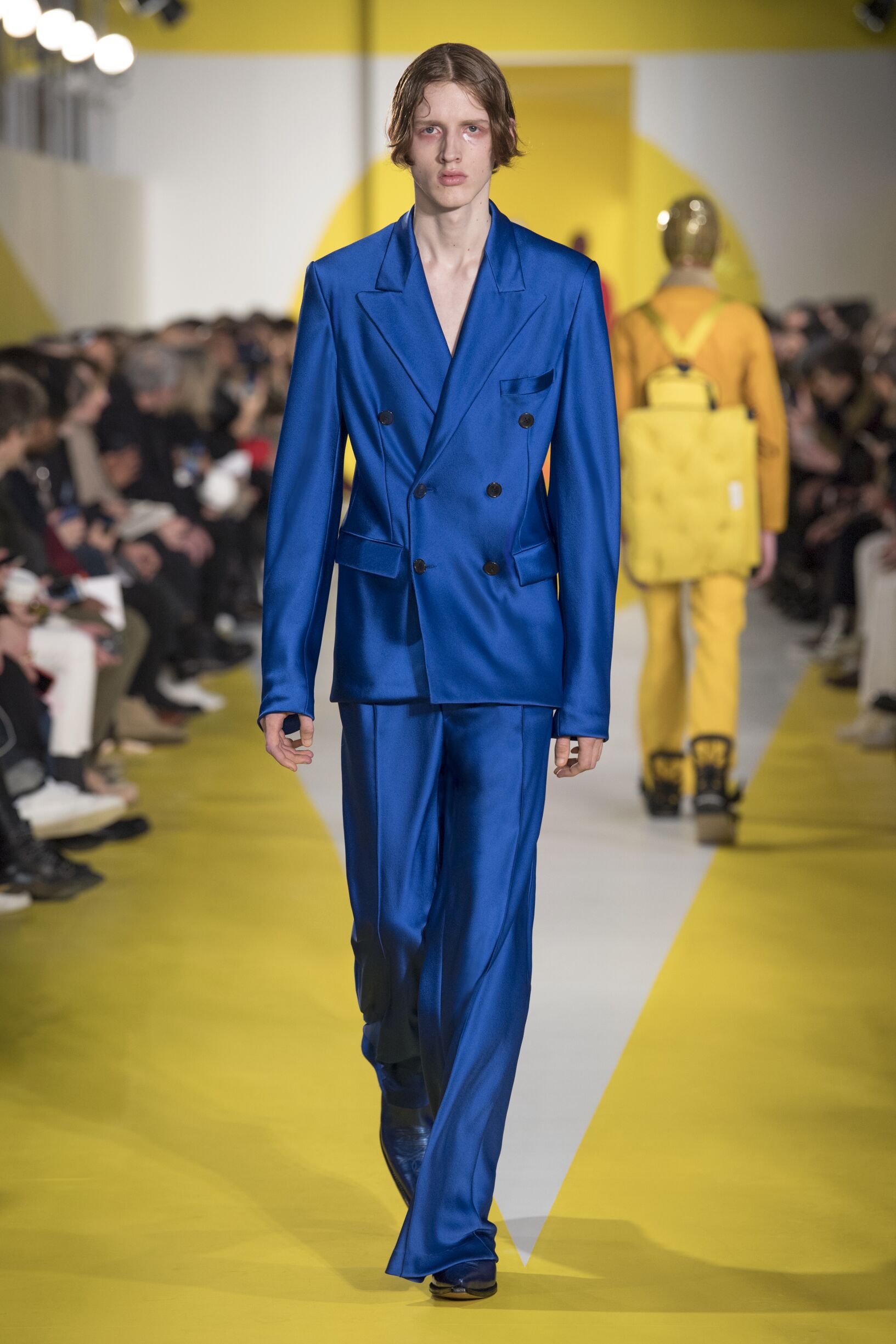 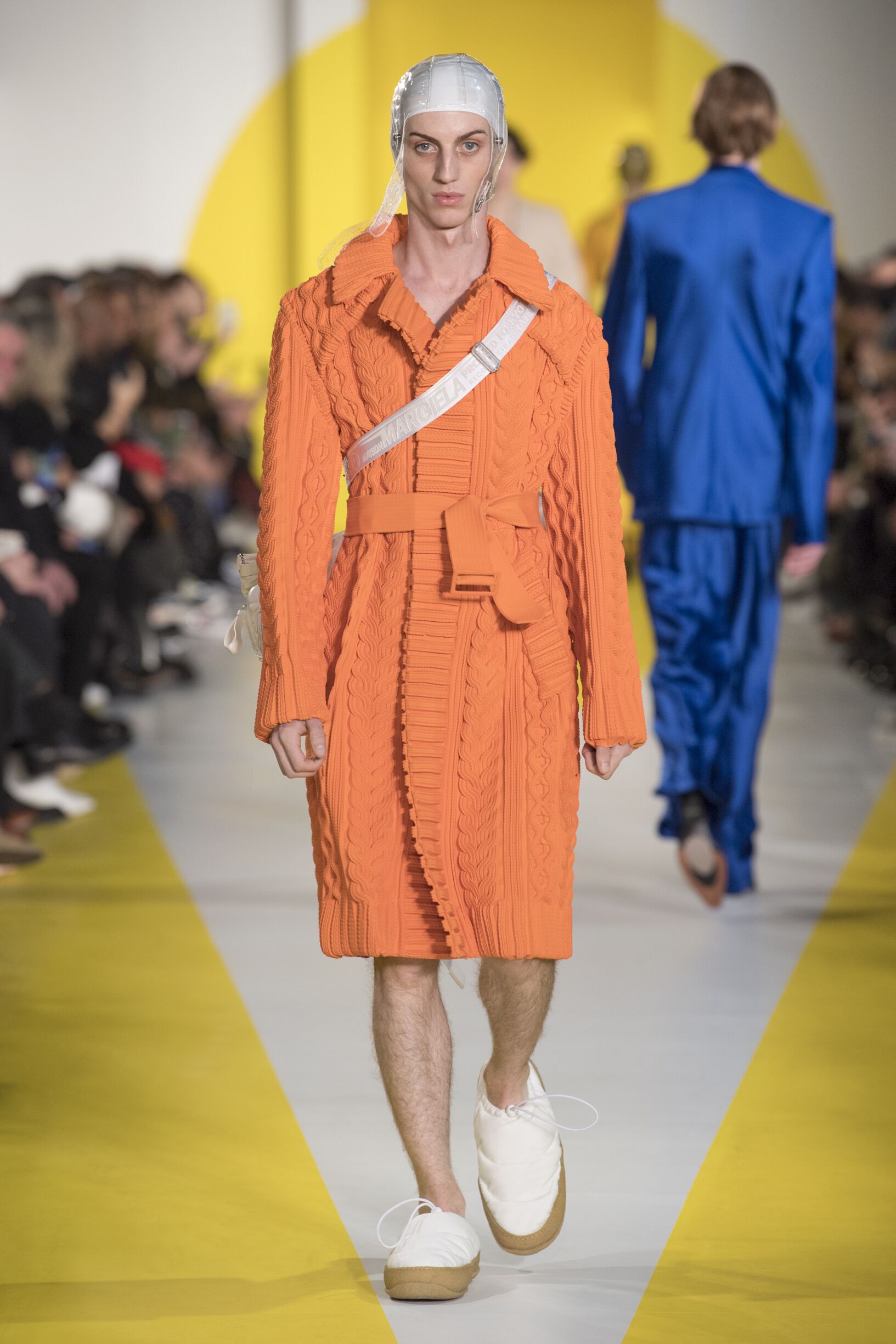 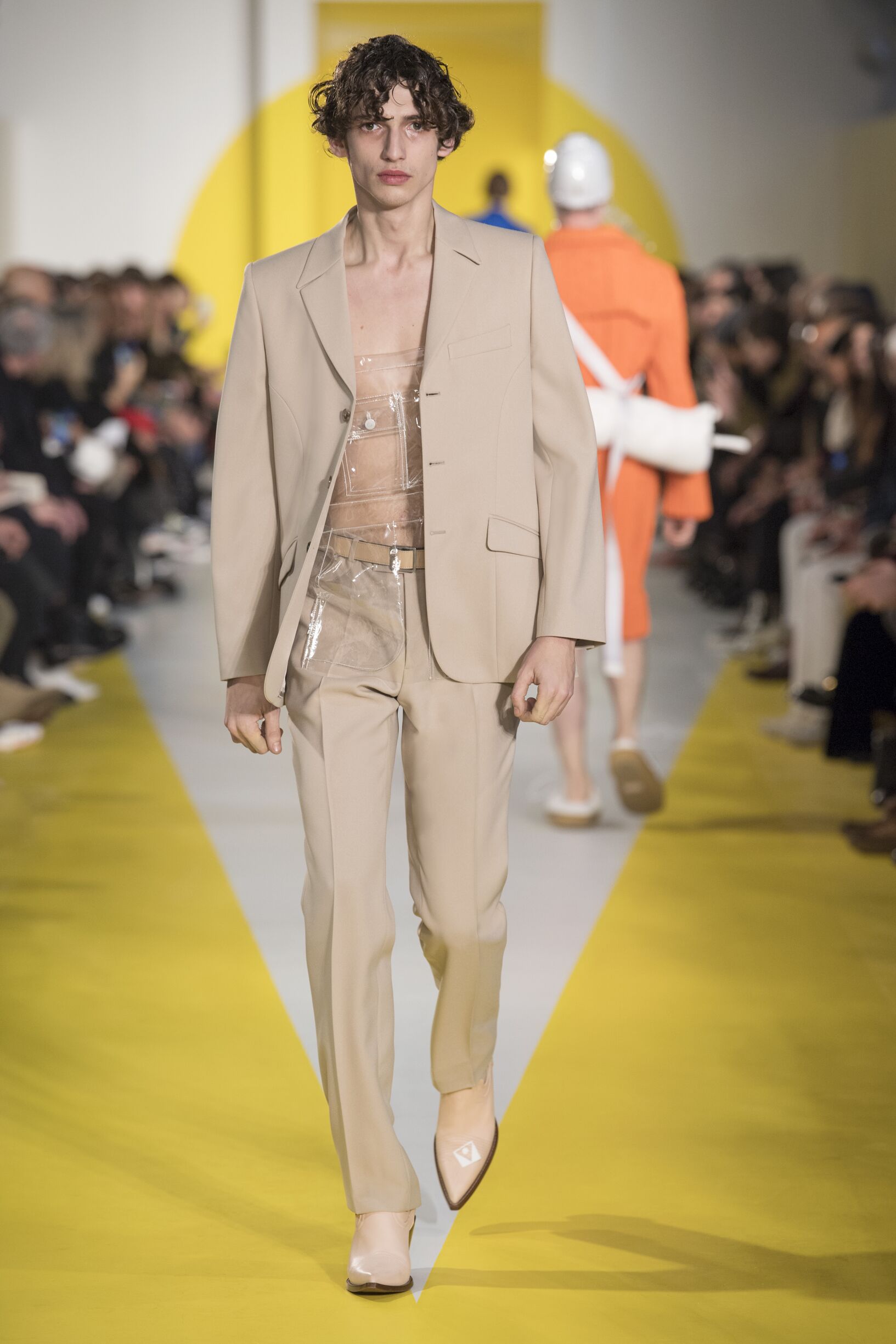 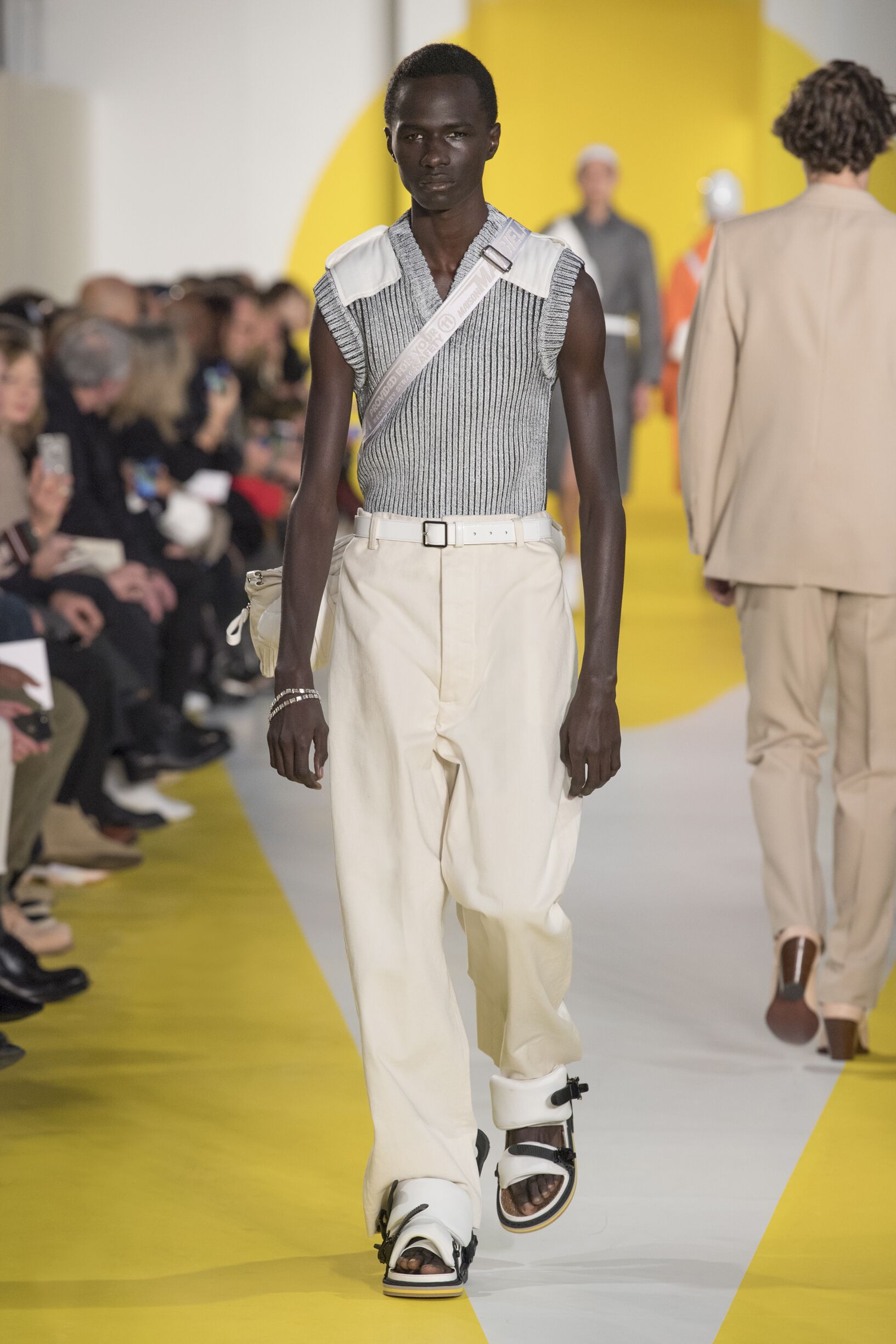 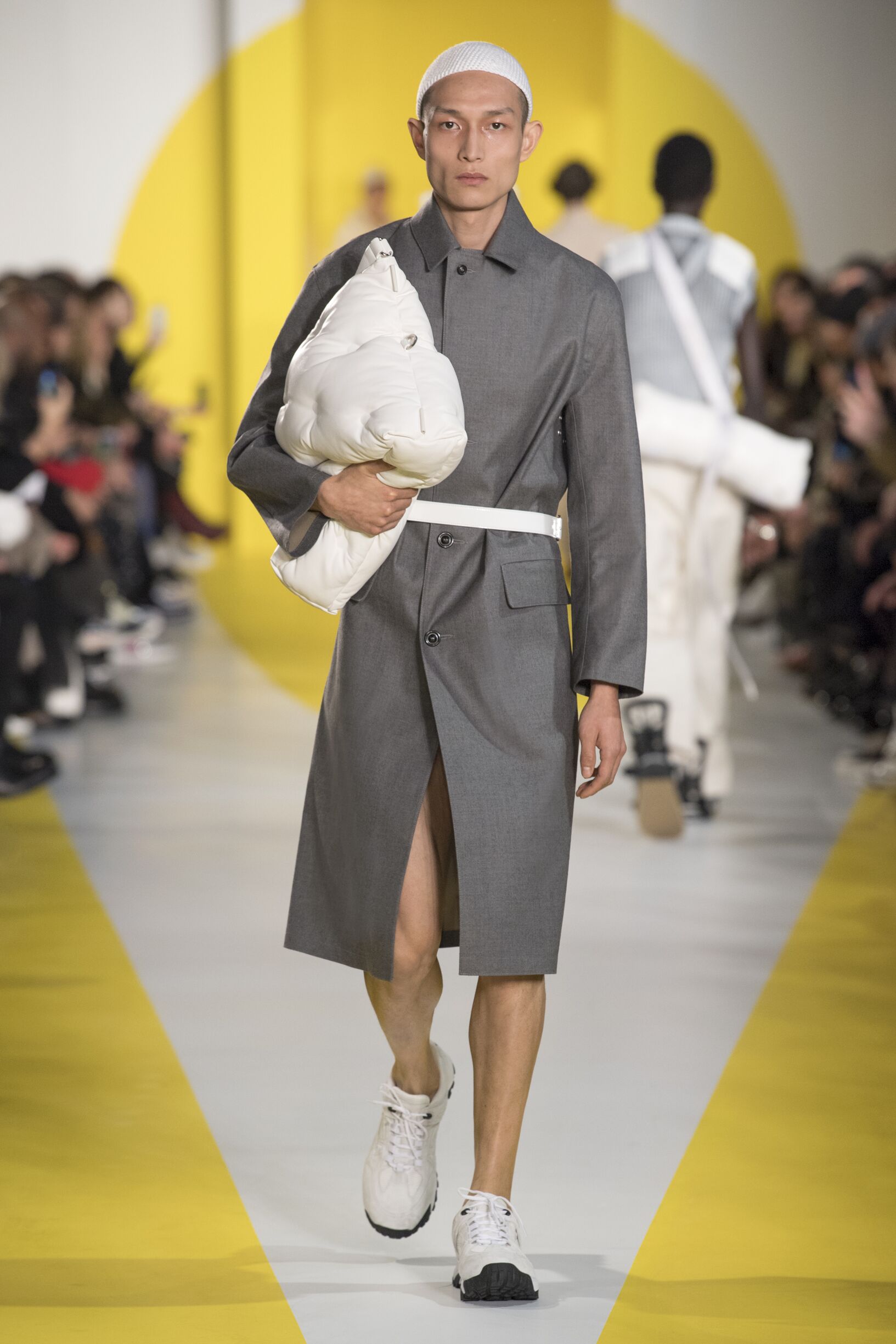 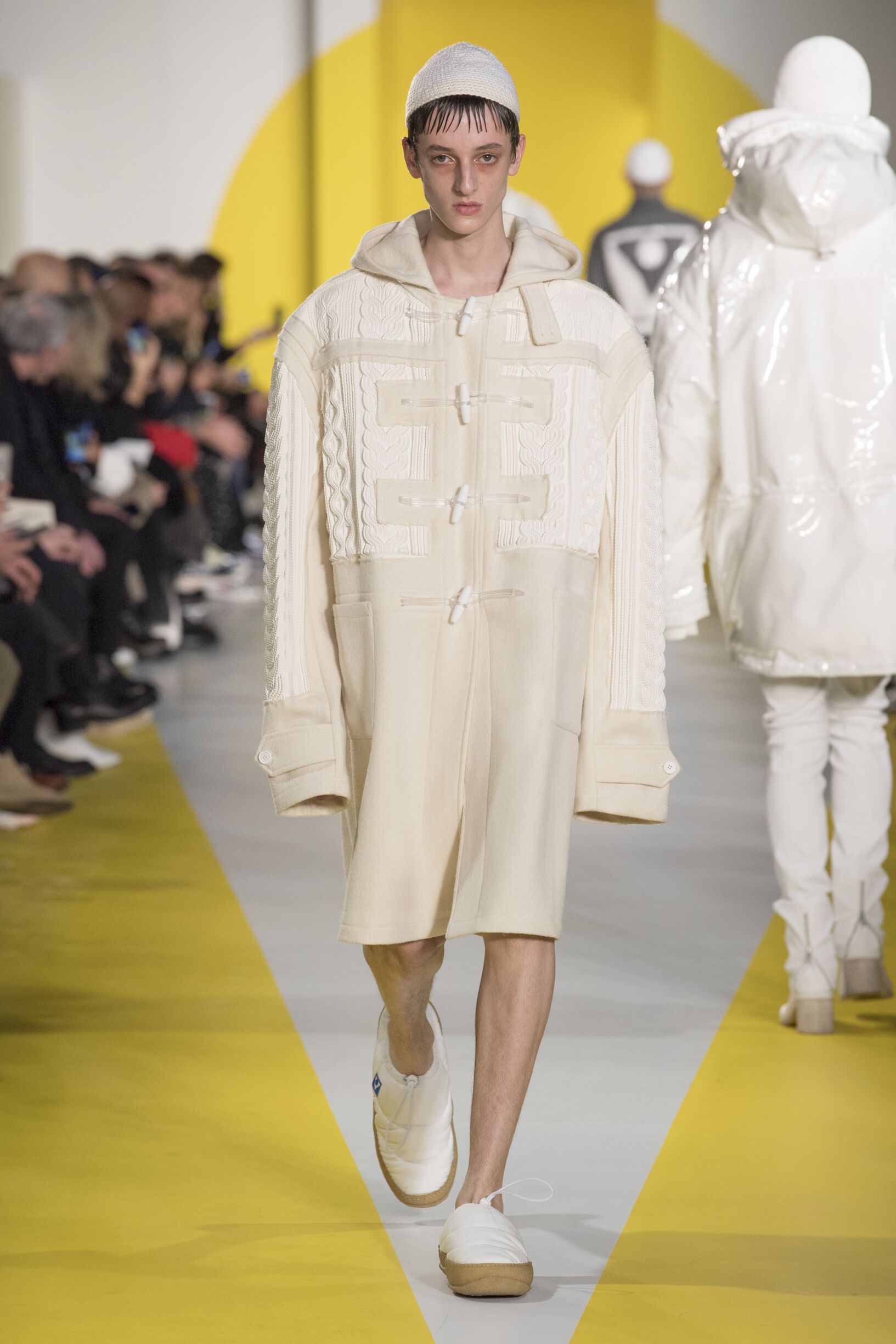 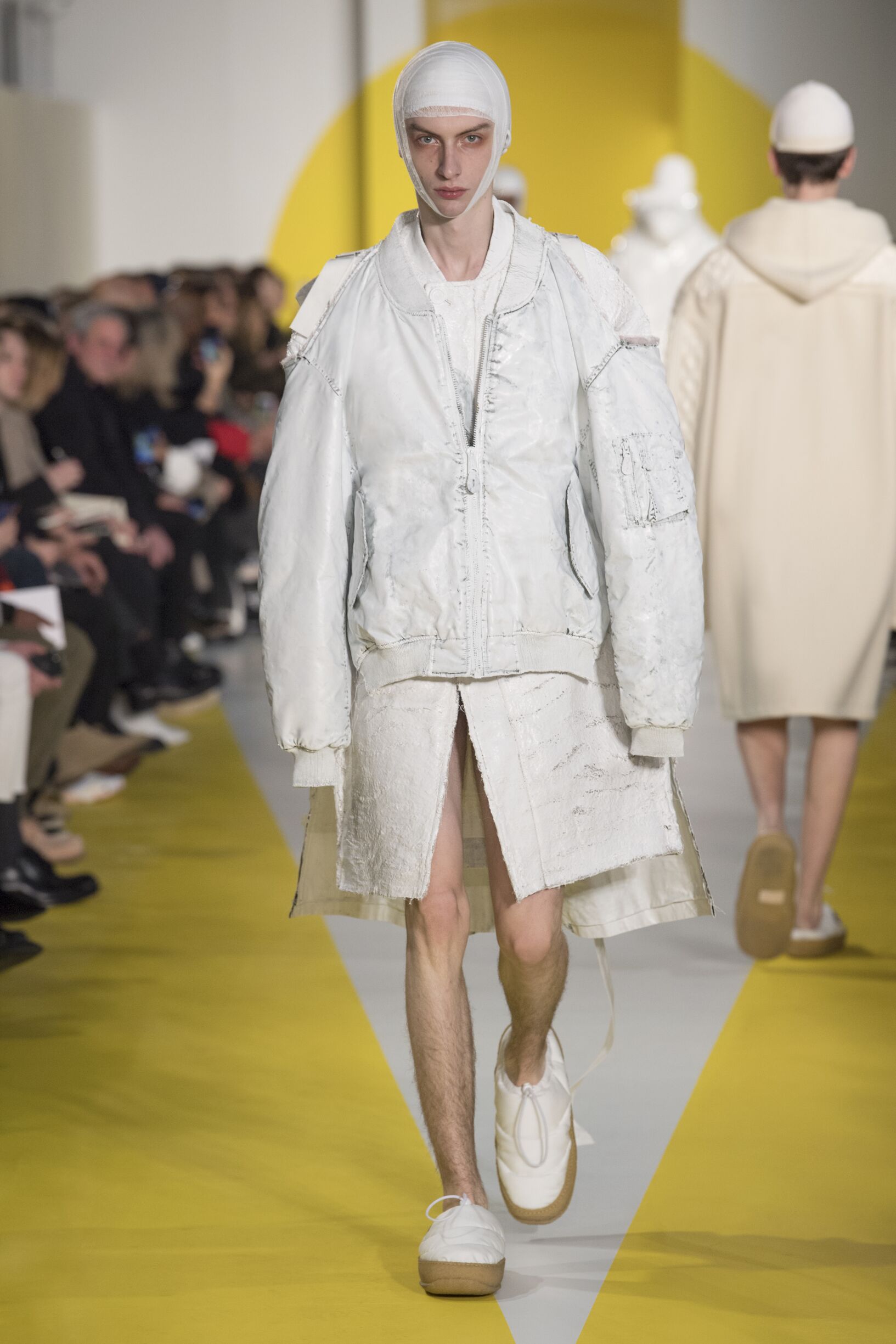 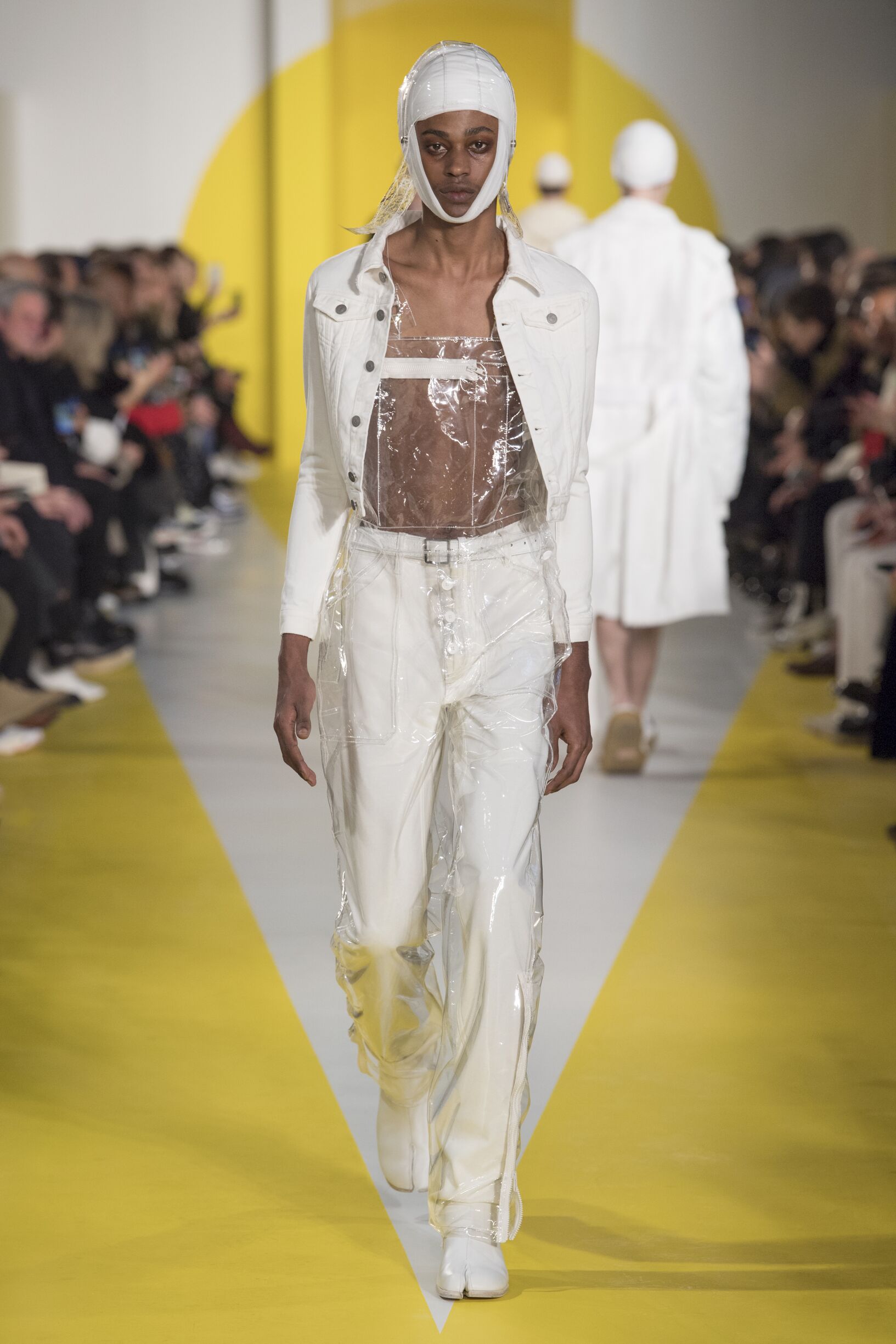 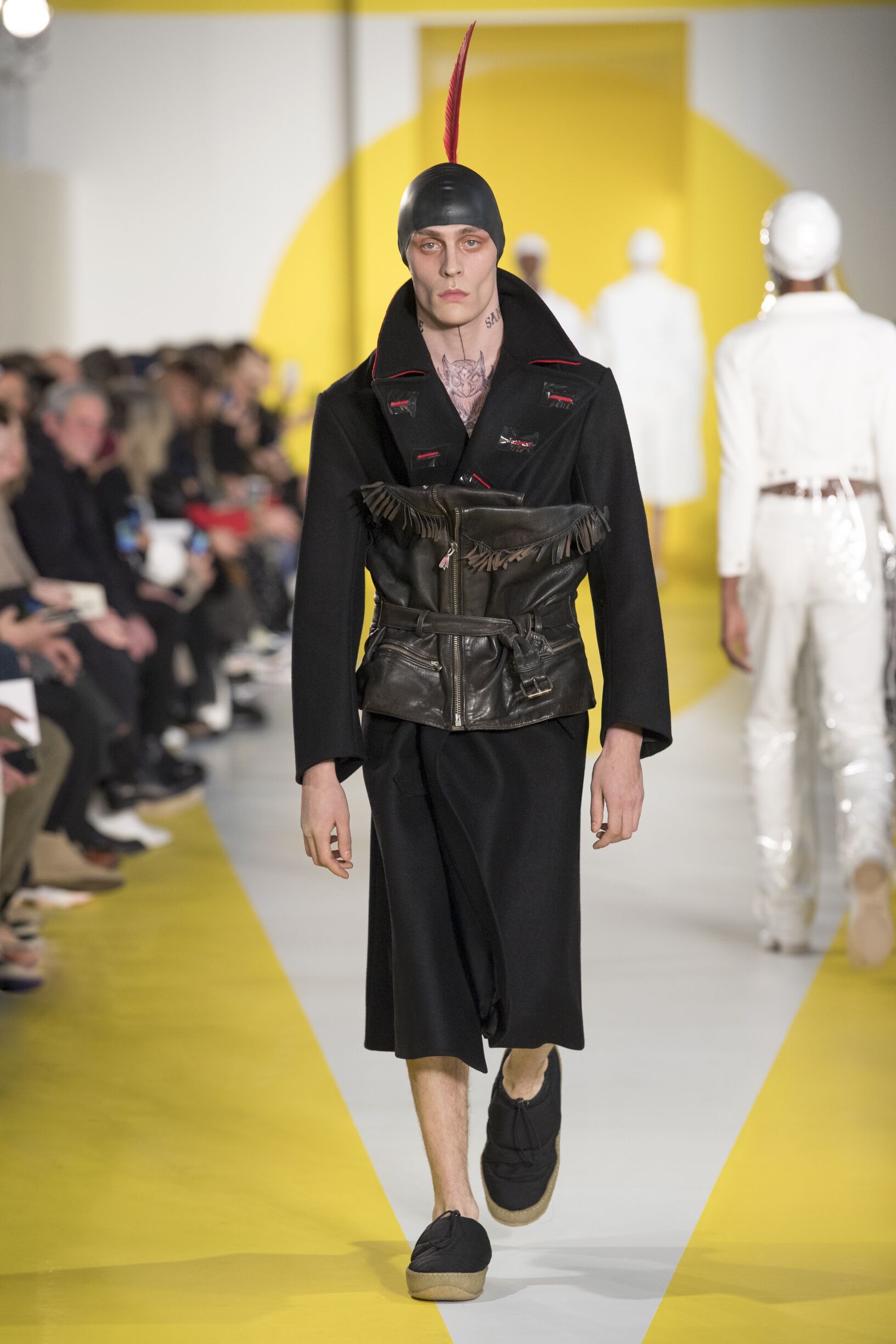 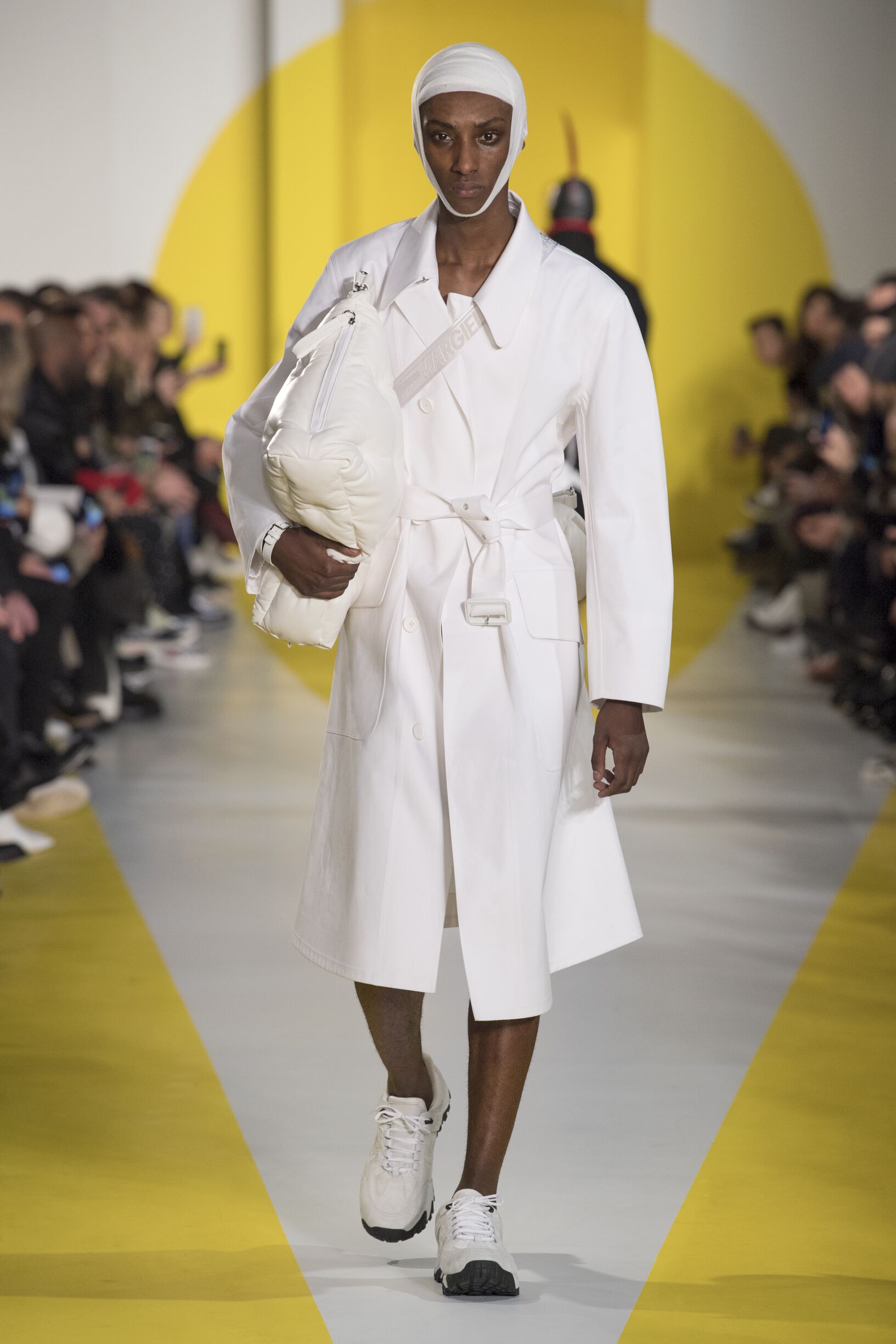 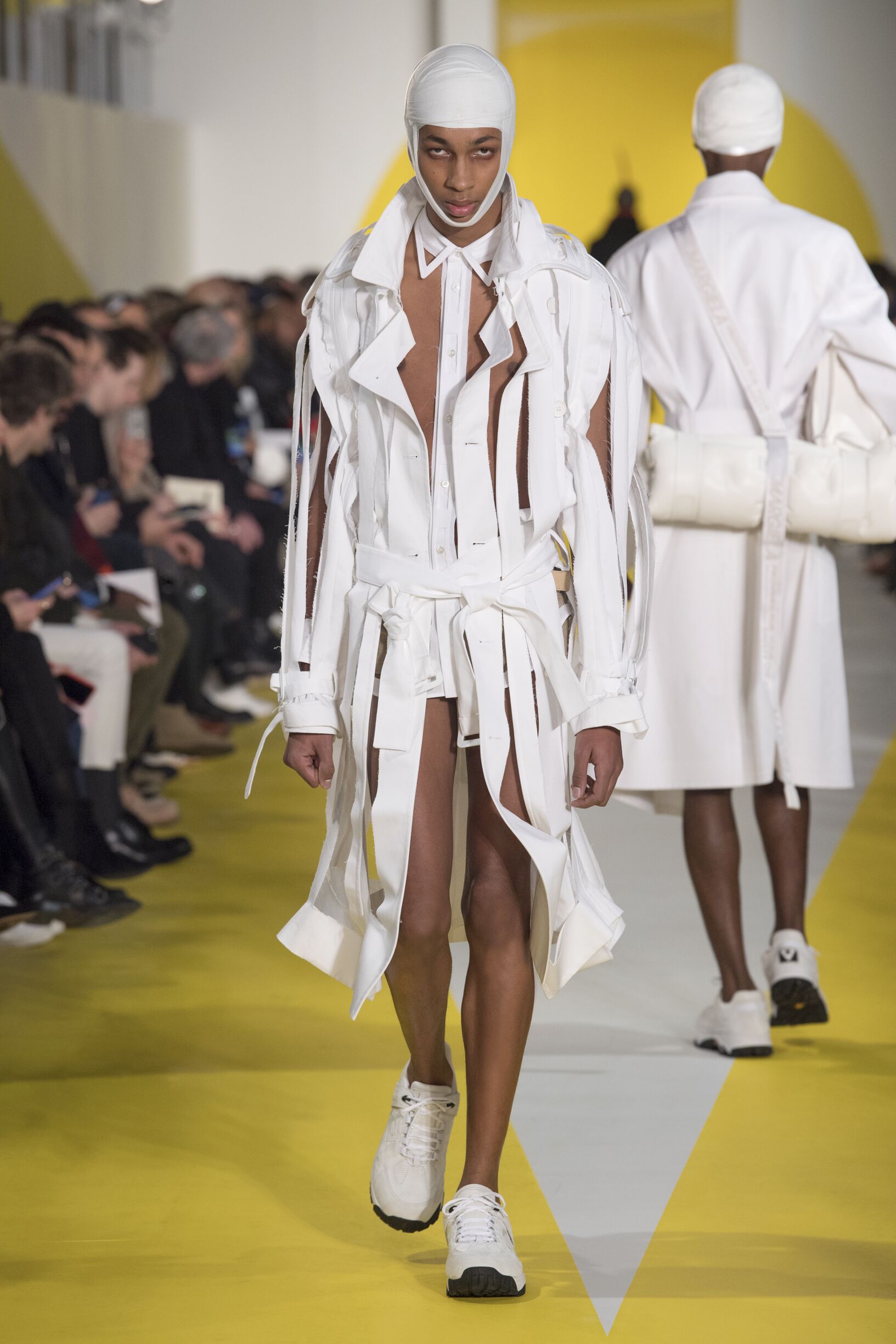