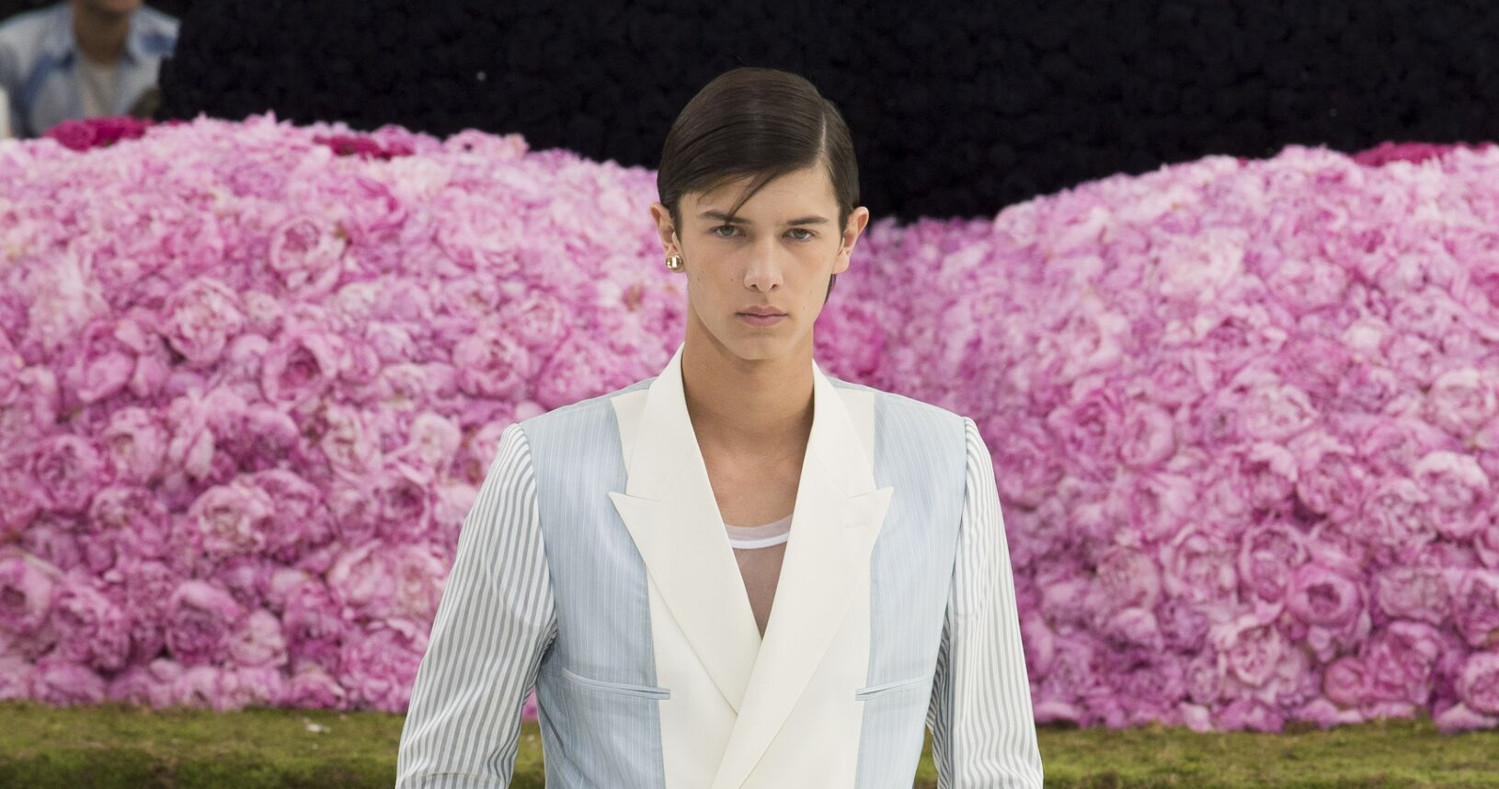 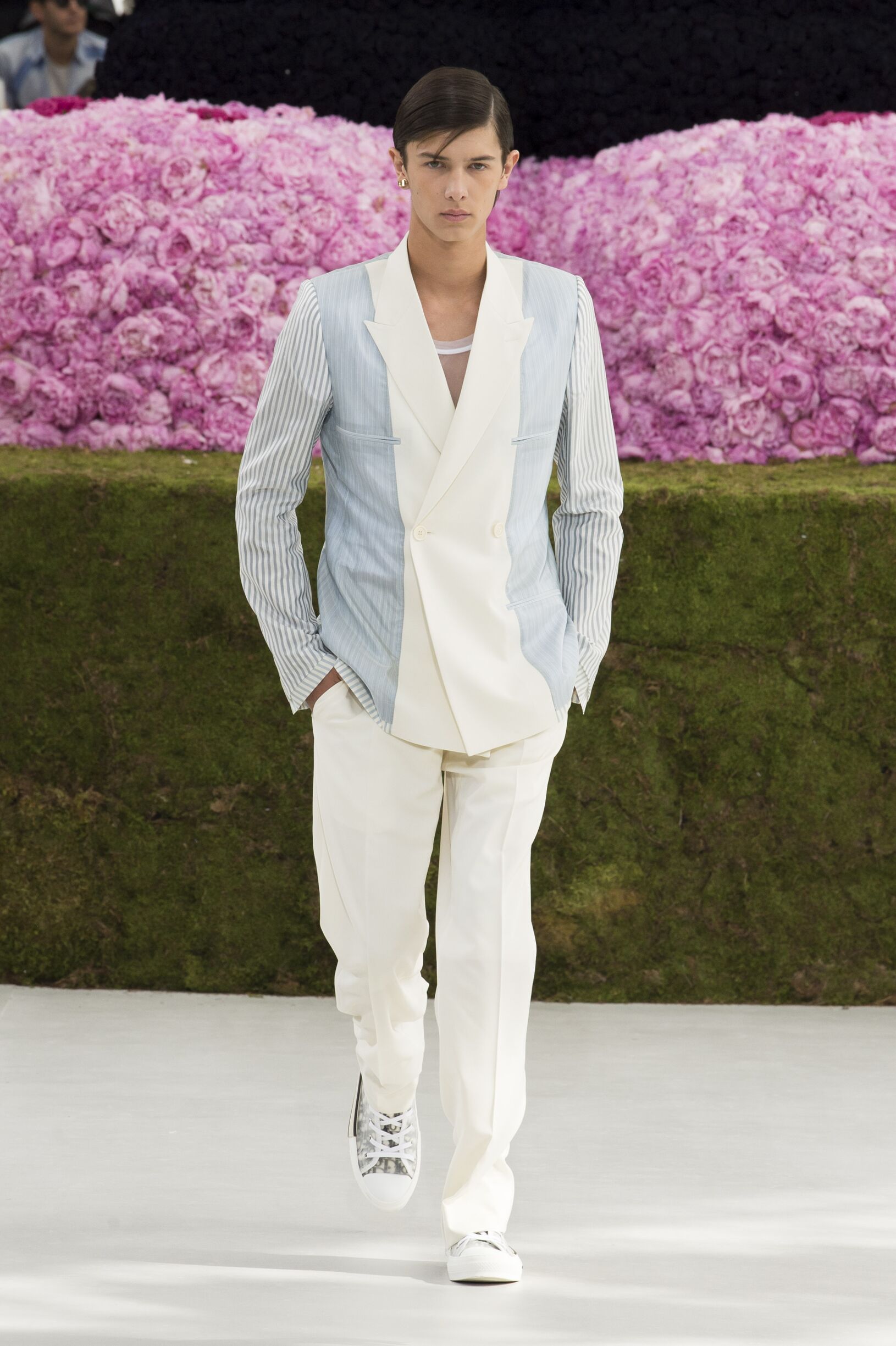 Dior, by Dior. In his autobiography, Christian Dior reasoned that there are two Diors – the man, and the myth. The latter is the house of Christian Dior, born in 1947; the former, monsieur Dior himself. For his debut collection as artistic director of Dior men, Kim Jones has chosen to interpret the codes of monsieur Dior himself through the language of his couture house. It is a dual tribute – to the reality of Dior, and the fantasy.

Drawing inspiration from Christian Dior’s private life and his creative output, the collection represents a dialogue between these two sides of his personality. Couture has inspired the savoir-faire and informed the choice of materials – notably in a reference to the house of Dior itself, through the use of a toile de jouy chosen for the original boutique at 30 avenue Montaigne, decorated by Victor Grandpierre in 1947. A new Dior emblem, inspired by this heritage, it appears as jacquards and embroideries, on materials as diverse as tulle and soft leather, and executed in feathers.

Translating a quintessentially feminine couture identity into a masculine idiom results in clothes which are softer, with rounded shoulders and eased shapes. A slashed cowl is added to the back of shirts, exposing the nape of the neck. A new Dior jacket, the tailleur oblique, wraps the body in a diagonal line, a subtle reference to the shape of monsieur Dior’s autumn-winter 1950 collection. It is executed in featherweight cashmere and summer mohair, as well as in the British wools beloved of Christian Dior for his own wardrobe and those of his clientele. Combining tradition with modernity, Kim Jones fuses references to haute couture with sportswear, representative of contemporary masculinity.

Floral motifs are a constant. They echo both monsieur Dior’s love of nature, and his “femmes-fleurs”: they are actually drawn from his personal porcelain, the shapes reassembled into contemporary patterns for prints and embroideries. Feather embroideries by lemarié are overlaid with vinyl, an effect that mirrors the glaze of bone china.

Porcelain inspires the color palette, which also echoes monsieur Dior’s edwardian upbringing and love of the eighteenth century: blue, white, the pale pink of his childhood home at granville, and the symbolic Dior gray. A shot of brilliant yellow-gold reflects Jean Cocteau’s definition of Dior as “this agile genius of our times whose magical name contains Dieu (god) and or (gold).”

The summer 2019 collection also references the profoundly personal and intimate – an almost secret history of monsieur Dior. His dog, bobby, who inspired a limited edition of the miss Dior perfume bottle and provided the name for a suit in the autumn-winter 1948 collection, makes a witty recurring motif. The jewelry introduces a new modernist logo derived from the one used for the Dior family’s business ventures in the 1920s; an embroidered cipher comes from the announcement of Christian Dior’s birth in 1905.

The abstract notion of the interior also inspires techniques: a series of jackets seemingly reversed to expose striped linings, and overlays of organza – both silk, and a technical sportswear organza – which allow the insides to be revealed. These, in turn, also transform the clothes into another homage, to couture savoir-faire.

Accessories also draw on the inimitable Dior heritage. The emblematic Dior ‘saddle’ bag is interpreted for the first time for men, offered in cross-body, backpack and belt-bag styles. It is even reappropriated as pockets on ‘archive’ leather jackets. An embroidered version of the toile de jouy features on leathergoods, alongside other Dior codes – the cannage pattern laser cut in leather, the Dior oblique canvas in a new tricolor variation.

Christian Dior stated that his identity as a couturier was actually not one man but many – a composite of people. Kim Jones draws on this same sense of community for his debut: yoon of ambush has created the jewelry, employing Dior emblems such as the neoclassical ‘cd’, flowers and insects; Matthew Williams of 1017 Alyx 9SM has designed a new metal buckle, used on accessories. Stephen jones has created millinery based on original ‘Christian Dior monsieur’ pieces, found in the house’s archives.

In a special commission, the artist Kaws has created the centerpiece of the show décor using his signature character bff covered entirely in roses, as an avatar of Christian Dior himself, clutching a replica of the bobby perfume bottle. Kaws’ designs for bee motifs – a Dior men emblem – punctuate the collection as idiosyncratic embroideries and prints, reflecting monsieur Dior’s own observation: “you can never go wrong if you take nature as an example.”

Here, the inspiration is both the natural world, and the nature of Dior itself. It results in not only a new look, but a new outlook. 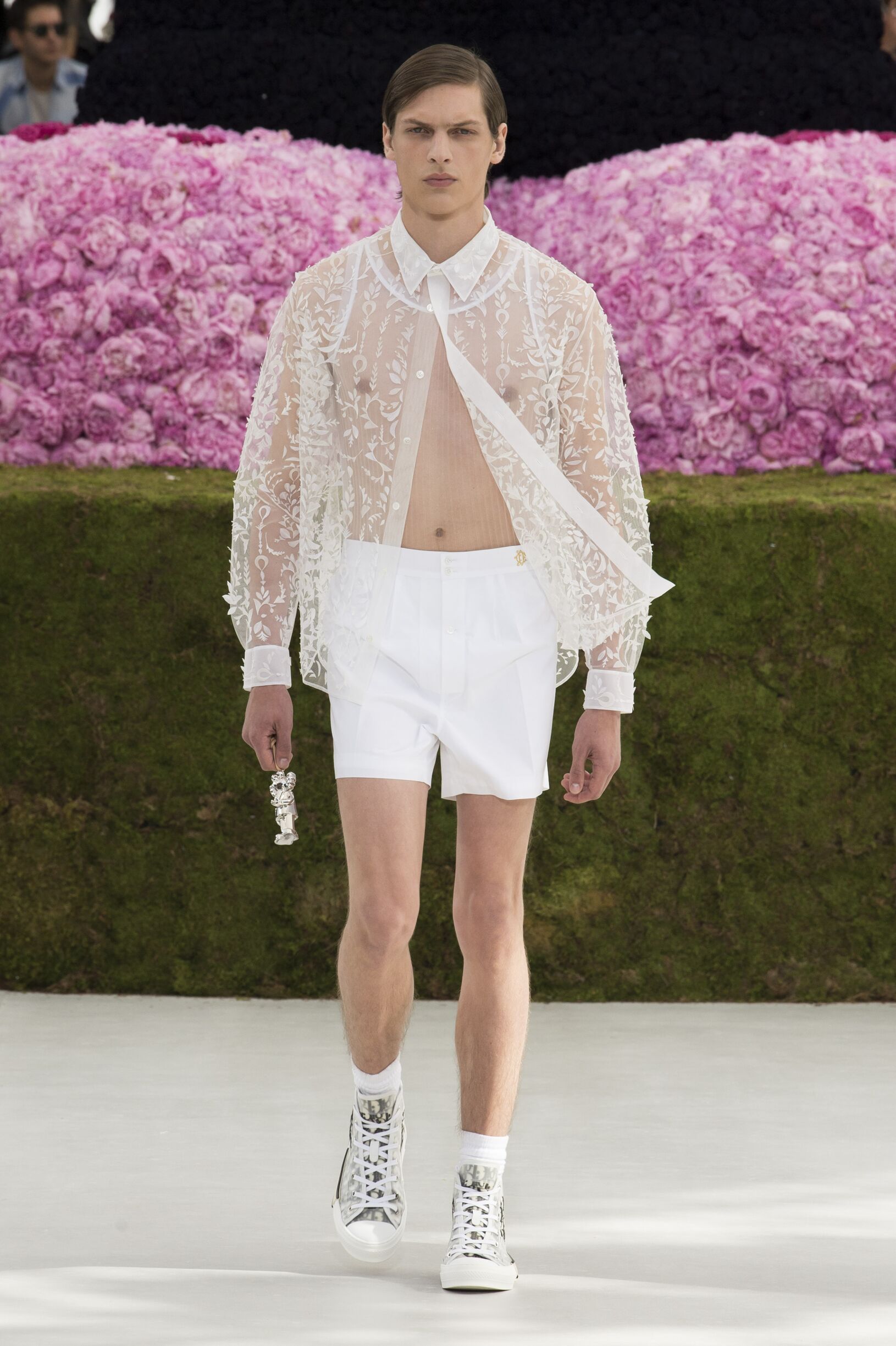 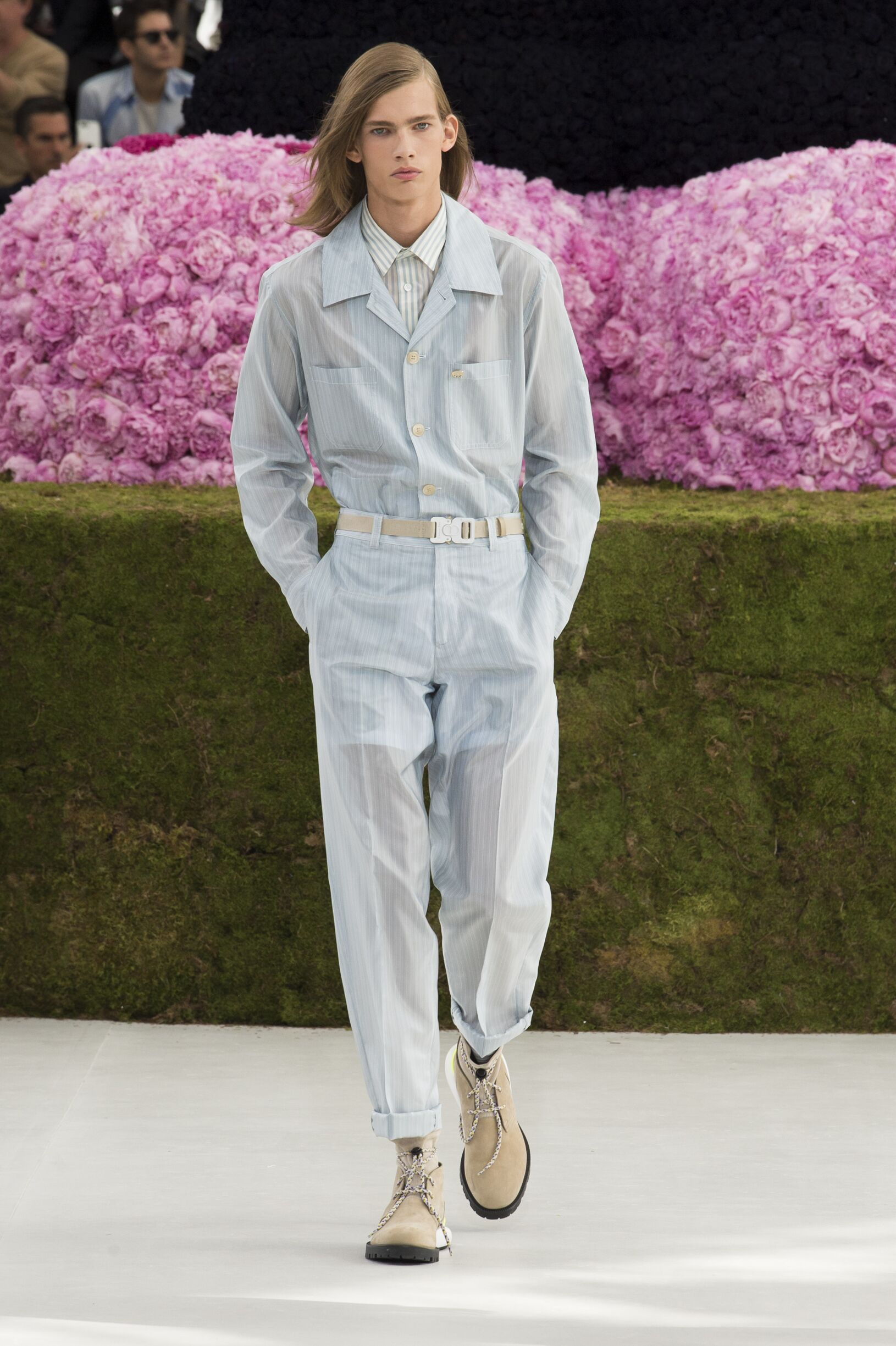 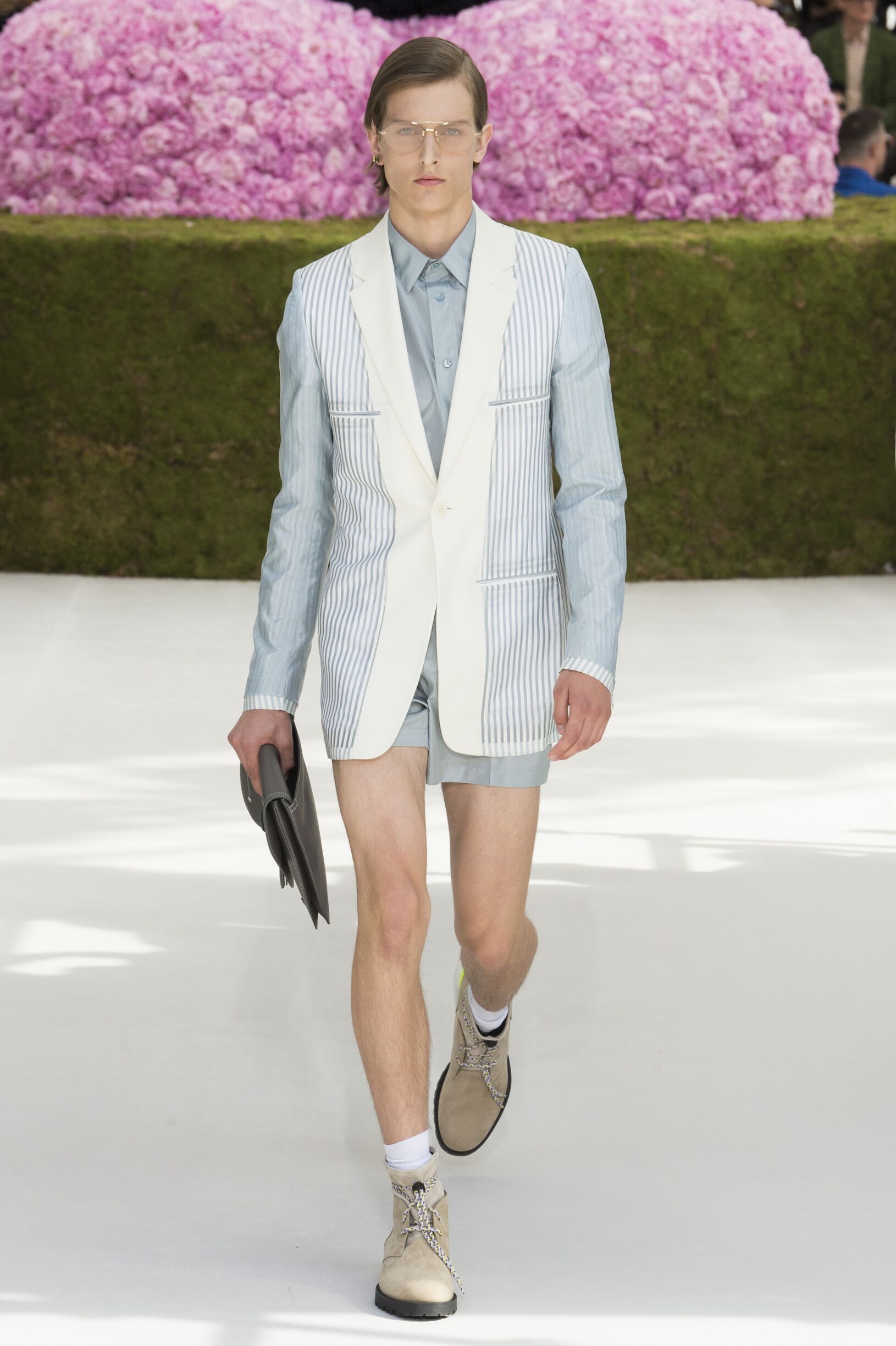 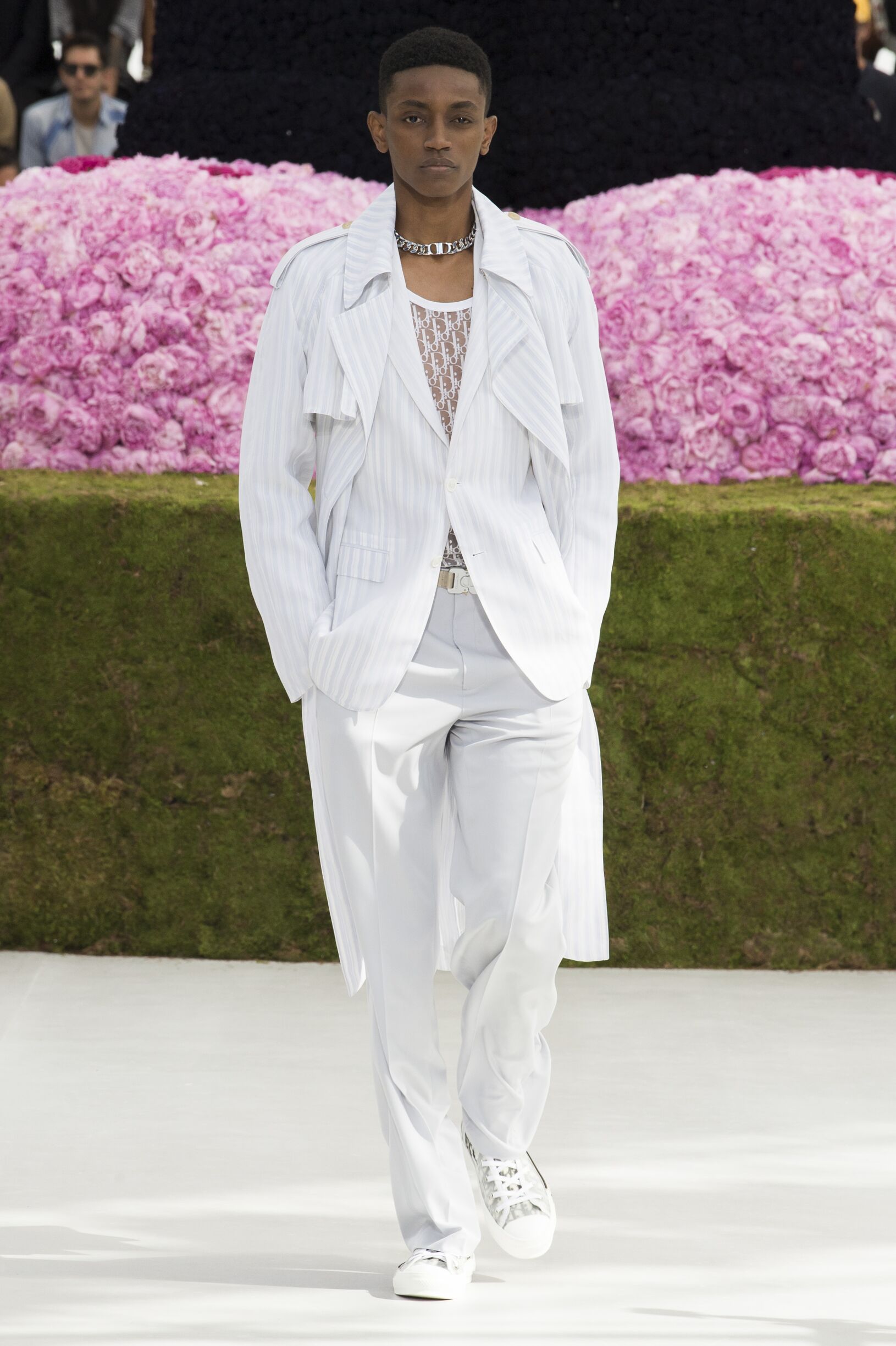 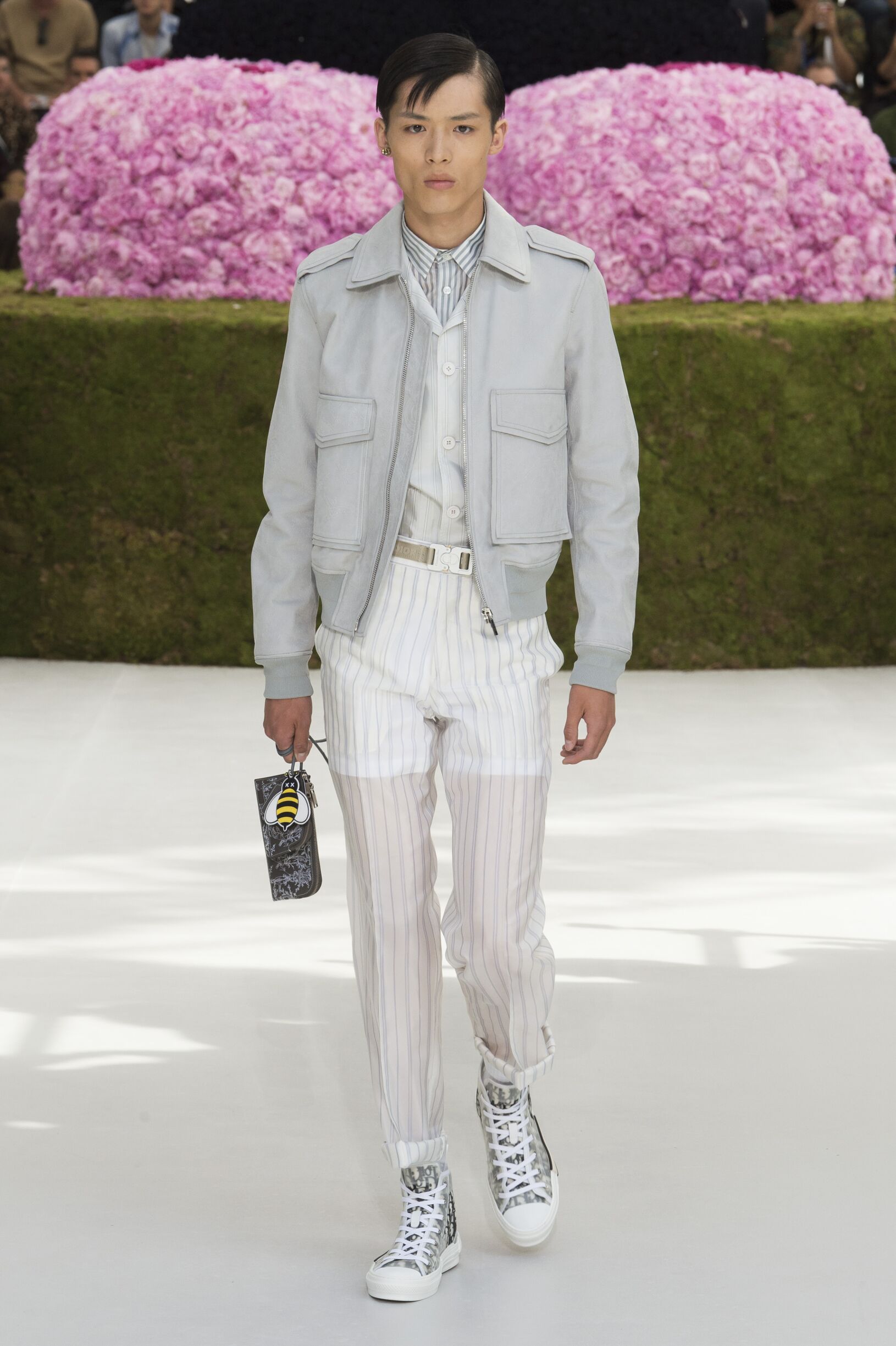