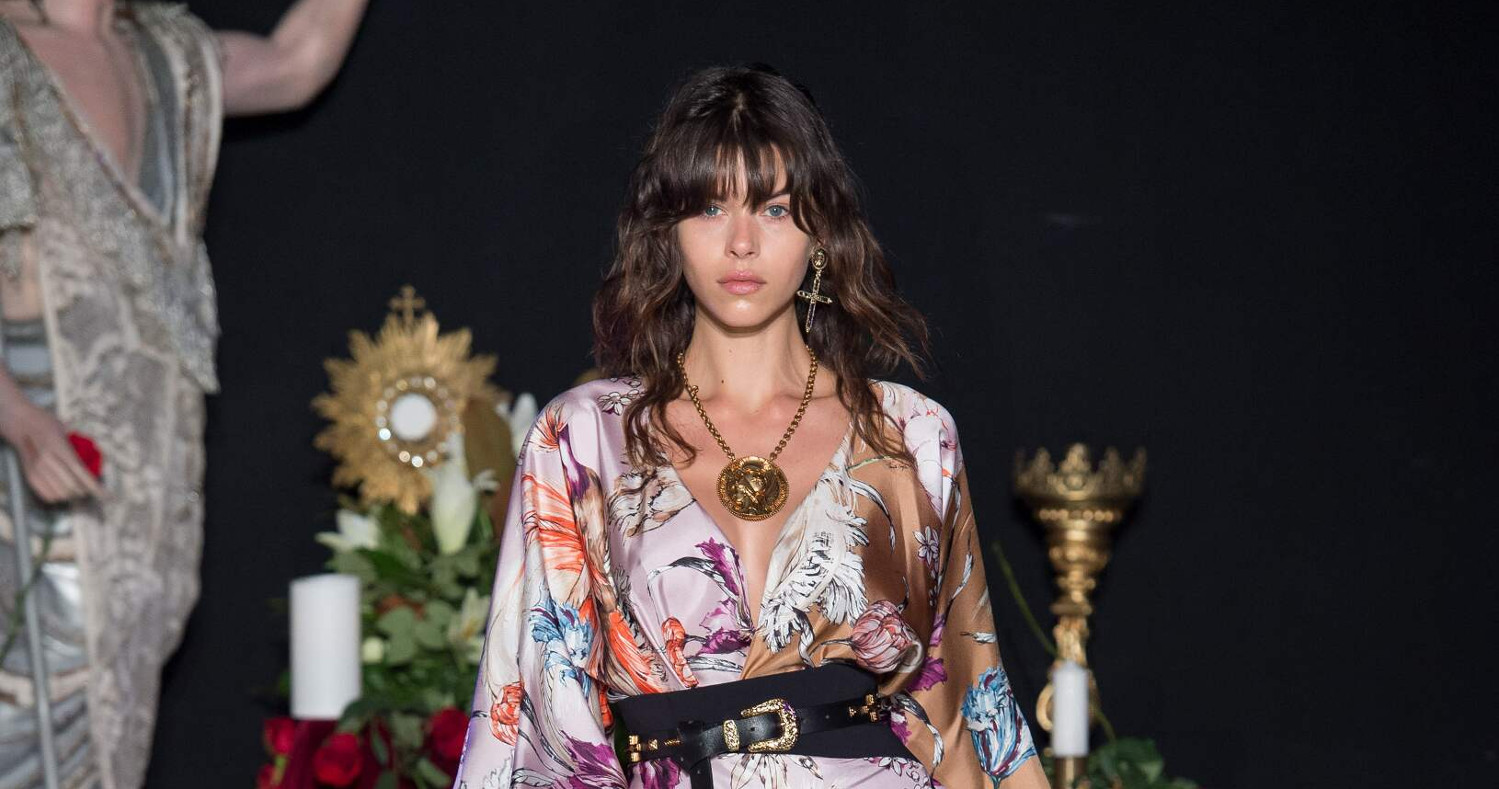 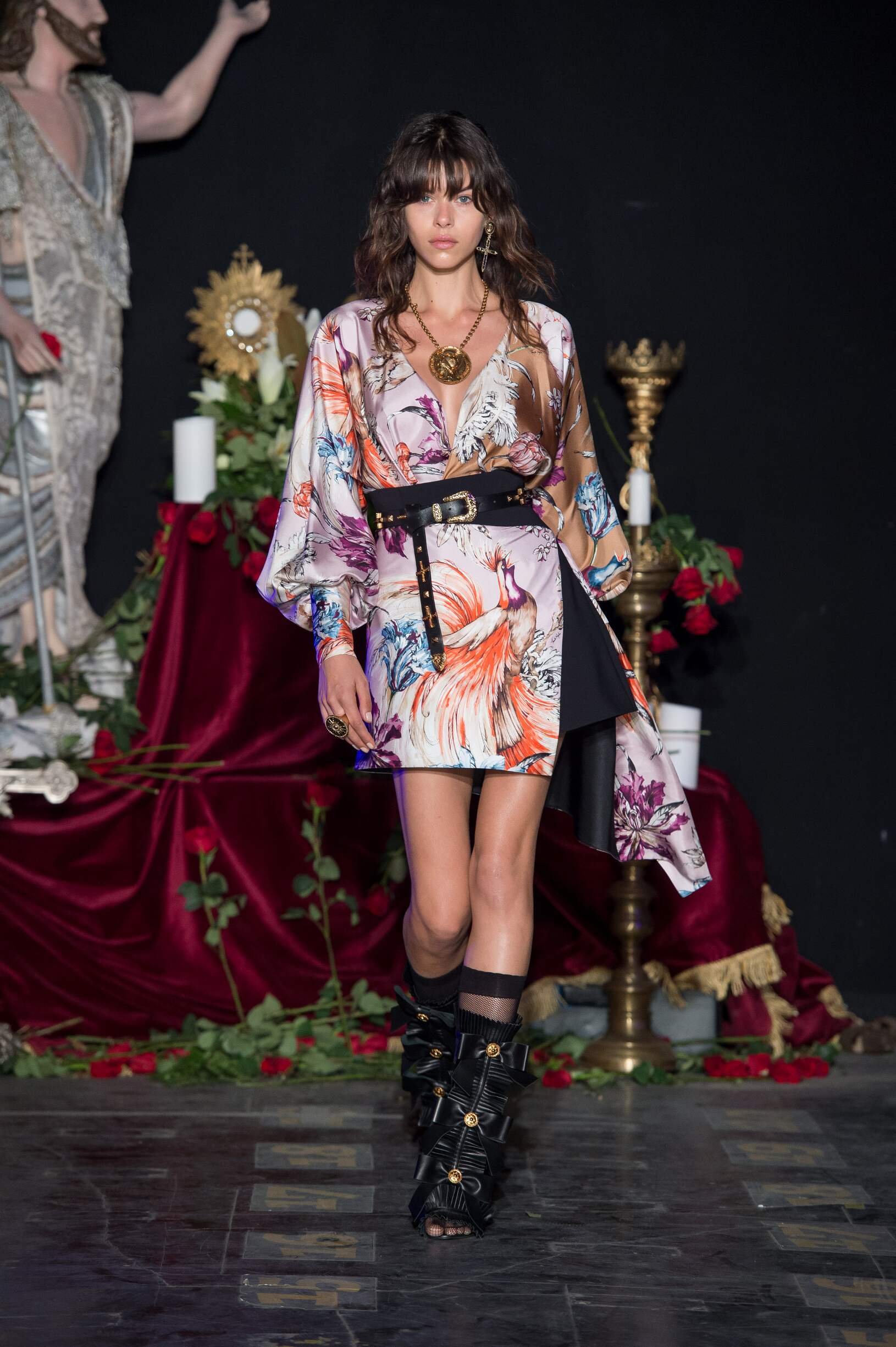 Fausto Puglisi has been inspired to present his women’s collection in Milan in a new dramatic environment and format. He collaborated on the fashion experience with Armando Punzo the artistic director of the Fortezza Theatre in Volterra. Puglisi arrived at his creative concept this summer as he traveled to his home of Sicily and was emotional and visually affected by the dark landscape, ruined architecture and historical oppression of the South of Italy.

But as he reached his home he thought of the strong, authoritative women who in contrast inhabited this region over the years. “The world in many ways has one south that is genuinely part of me” said Puglisi. “The south that instinctively mixes ancient traditions with a sense of freedom and explosive passion. The south that has an underlying restlessness, a place of ancestral meanings, the south that melts old and new traditions.”

As seen in different ways in his design vocabulary, Sicily and South Florida have the same fascination for Fausto. They have an intensity, the capability of producing beauty with contrast and clashes, creating vivid aesthetics that are highly distinctive as seen in full force in this collection.

Puglisi’s spring/summer designs are a liberating scream against all entrapments, a rebellious act – driven by aesthetics – towards an idea of beauty, pleasurable and hypnotic. Reassuring but reactionary. The dream is to use boundaries to overcome them, always knowing that the sanctity of the female body goes through a sincere narrative. The set, a three story industrial structure though which the models traveled, was enlaced with architectural and other iconography.

“I thought about a shrine in which every woman can be a Goddess – like Minerva, powerful, immortal and fearless. And of course beautiful in her own ways” said Puglisi. Italy has been the temple of decorations since the Byzantine’s sense of luxury lured the masses towards an increasingly popular Catholic movement.

The iconography is also part of many cultures of South Florida. Puglisi absorbs this heritage to narrate its soft and gentle, sweet side. With hand painted prints evoking Eighteen Century wallpaper patterns, he creates a contrasting balance with his signature color blocking. The cross, a symbol of the Catholic iconography is used as a graphic sketched pattern. The washed denim, sewn together with leather, marks the fine line between rules and unapologetic freedom.

Puglisi’s iconic pieces are all there: the biker jacket, the boyfriend shirt, the varsity bomber, the caban, the oversize t-shirt. This collection is mostly a hymn to falling house of cards, to oppressive walls that collapse, to obscure ideologies that often become reality. It’s the constant quest for freedom of expression that incessantly moves Puglisi on this personal creative path.

The Fausto Puglisi Spring/Summer 2017 fashion event took place at a former theatre in Milan. Puglisi’s body of work is a study in bold contrasts, and reflects his Italian origins as well as his fascination with all facets of American culture. 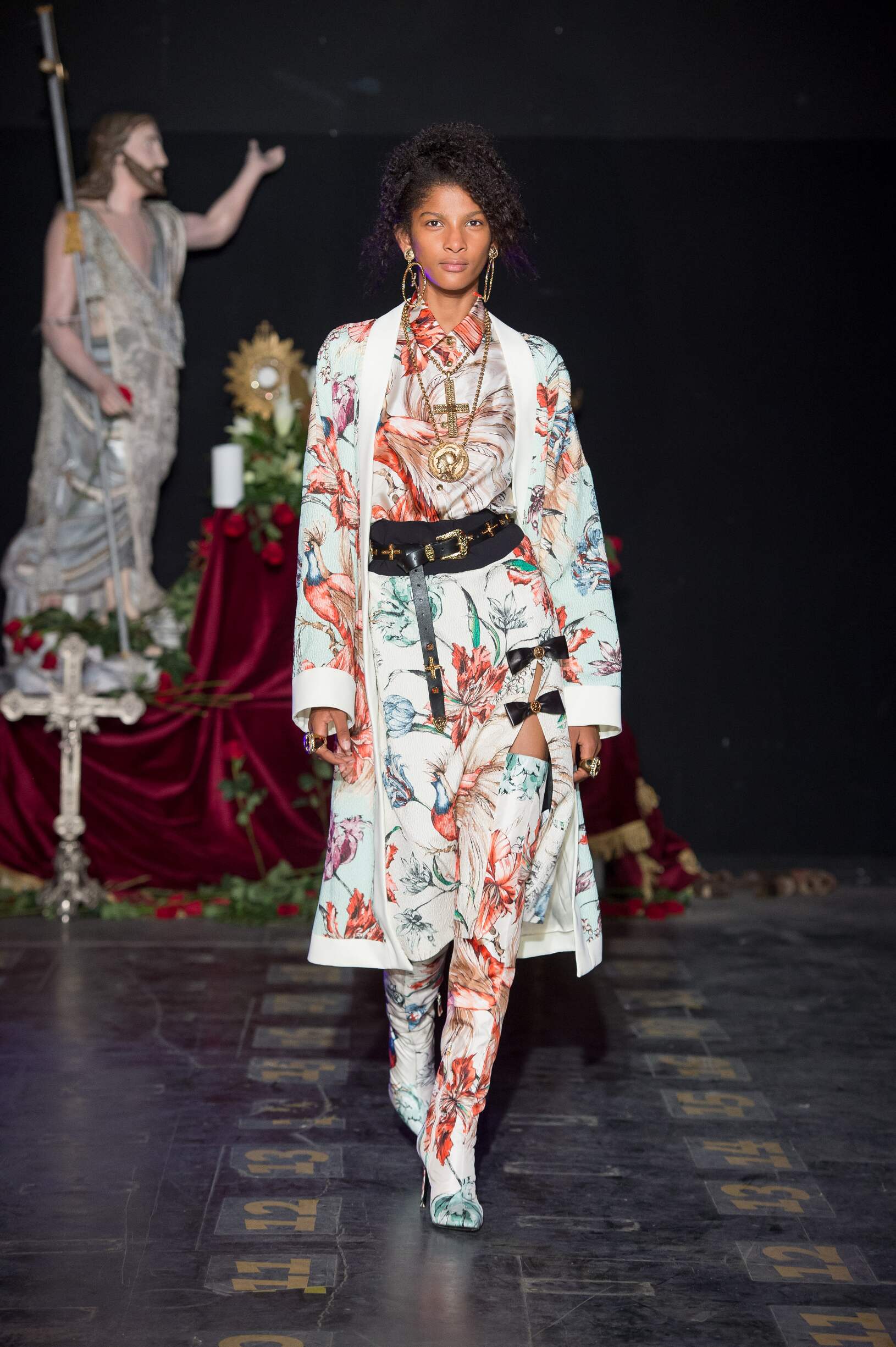 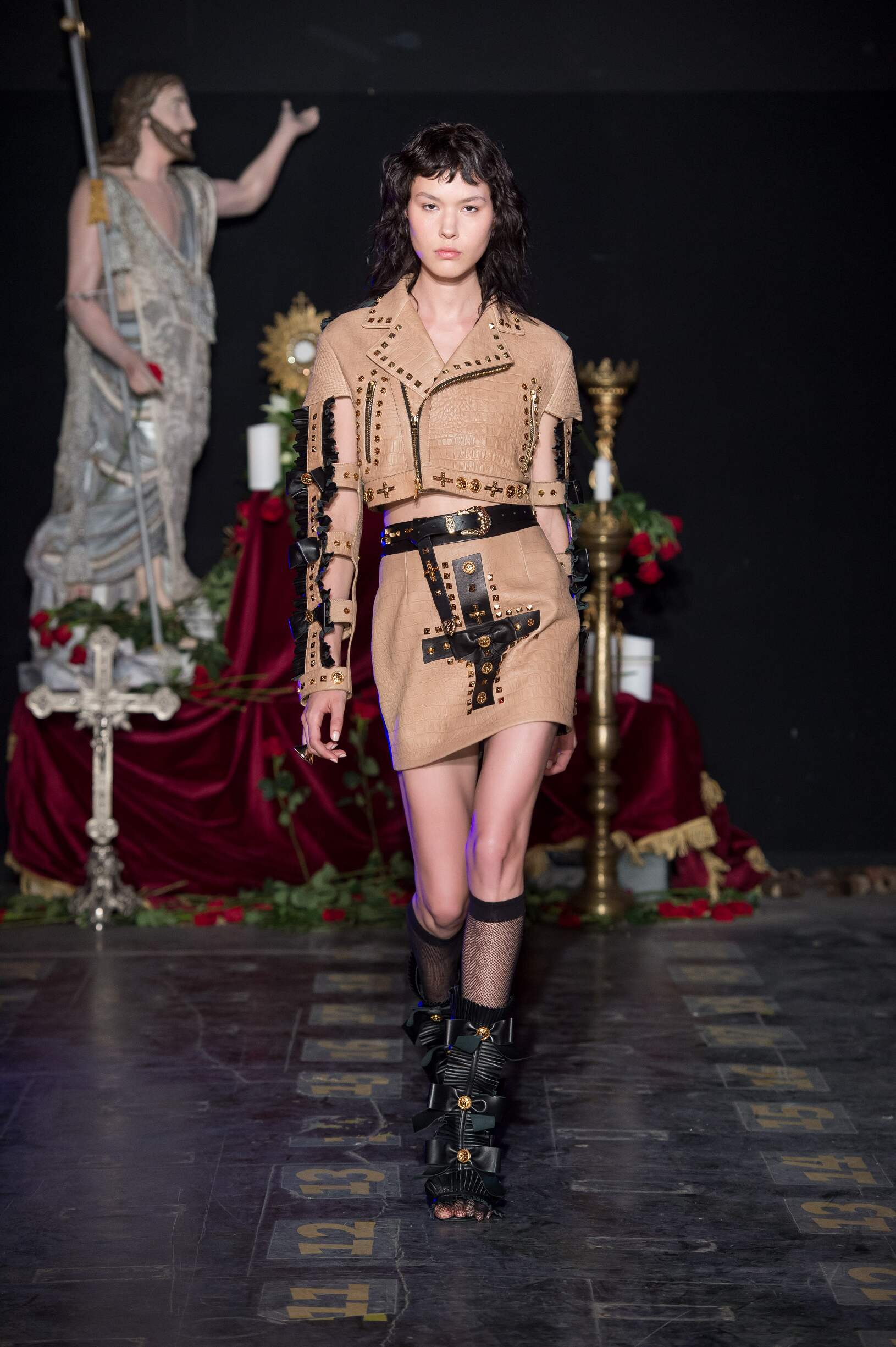 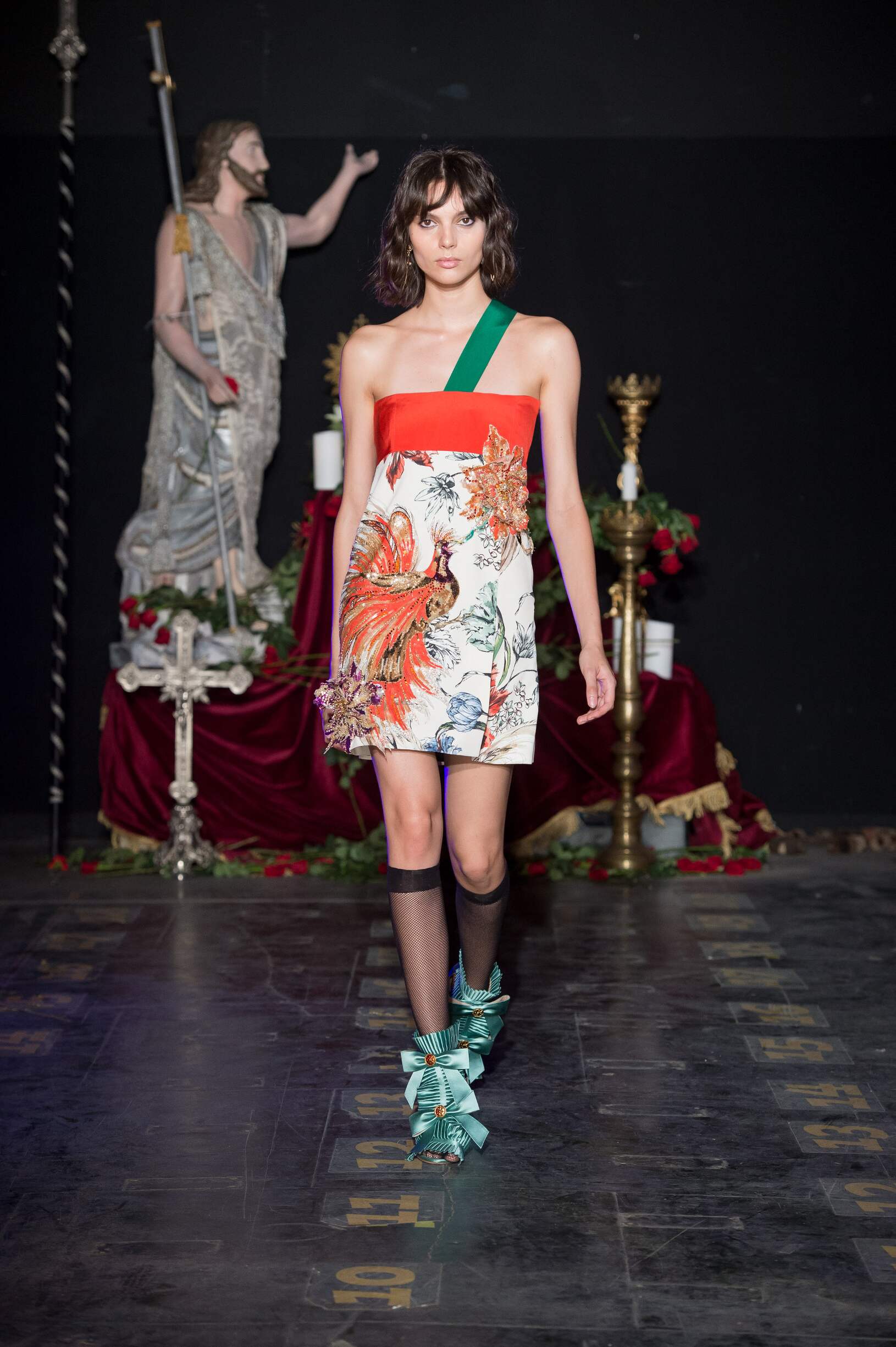 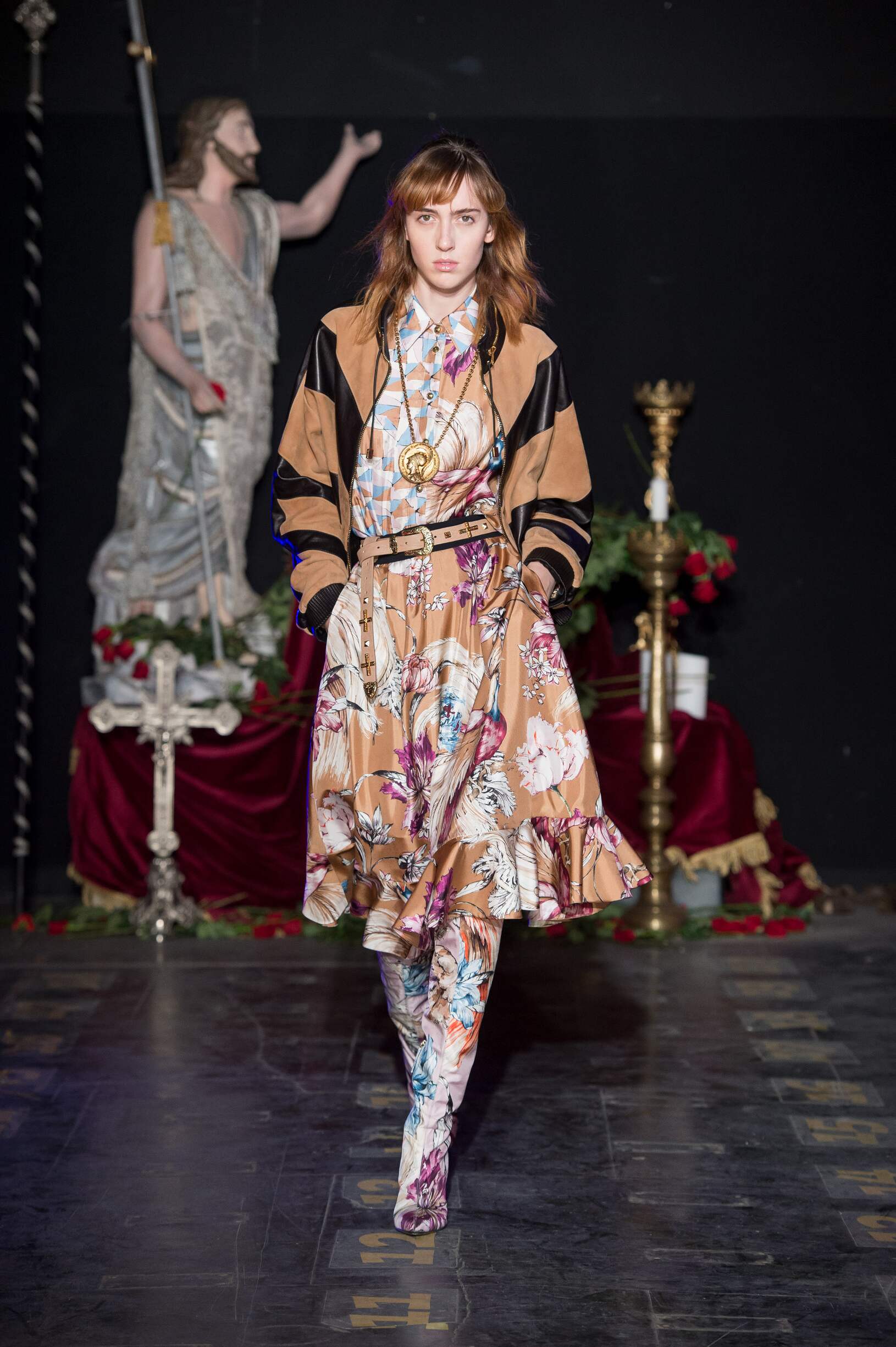 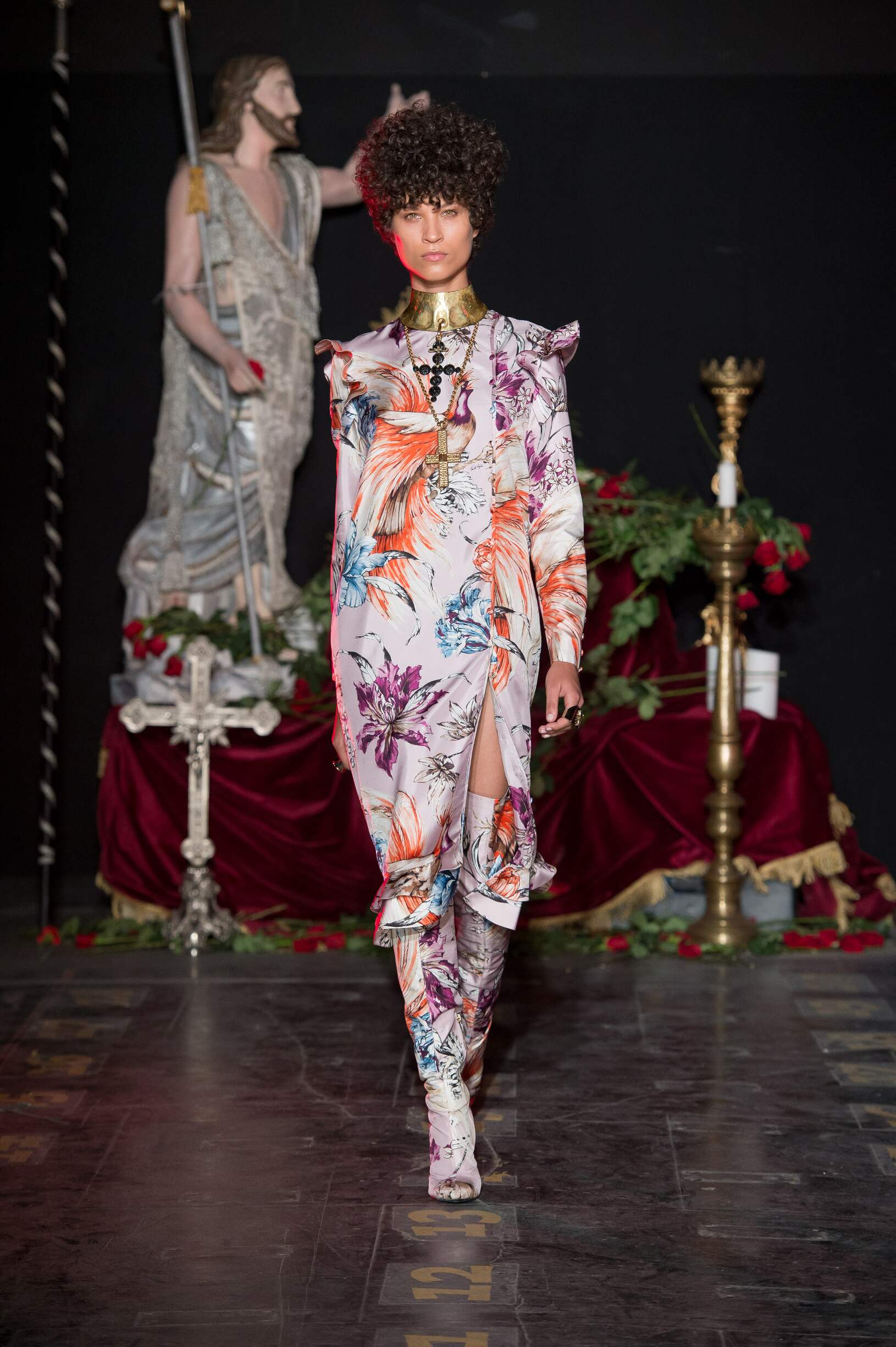