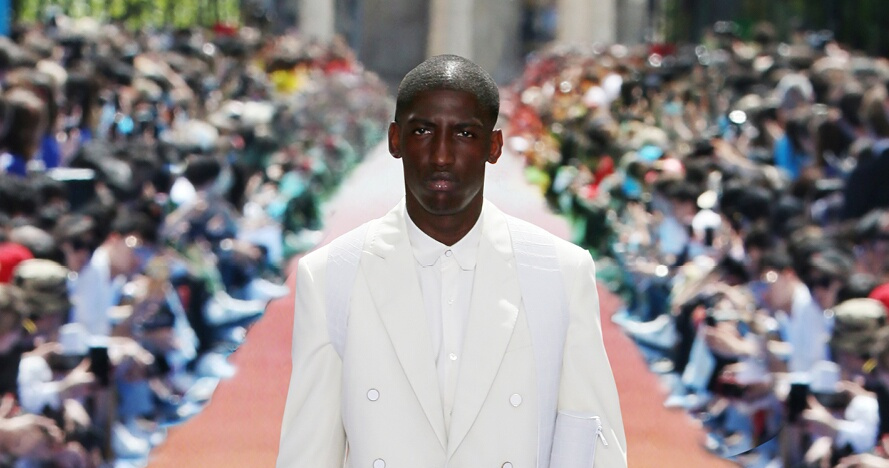 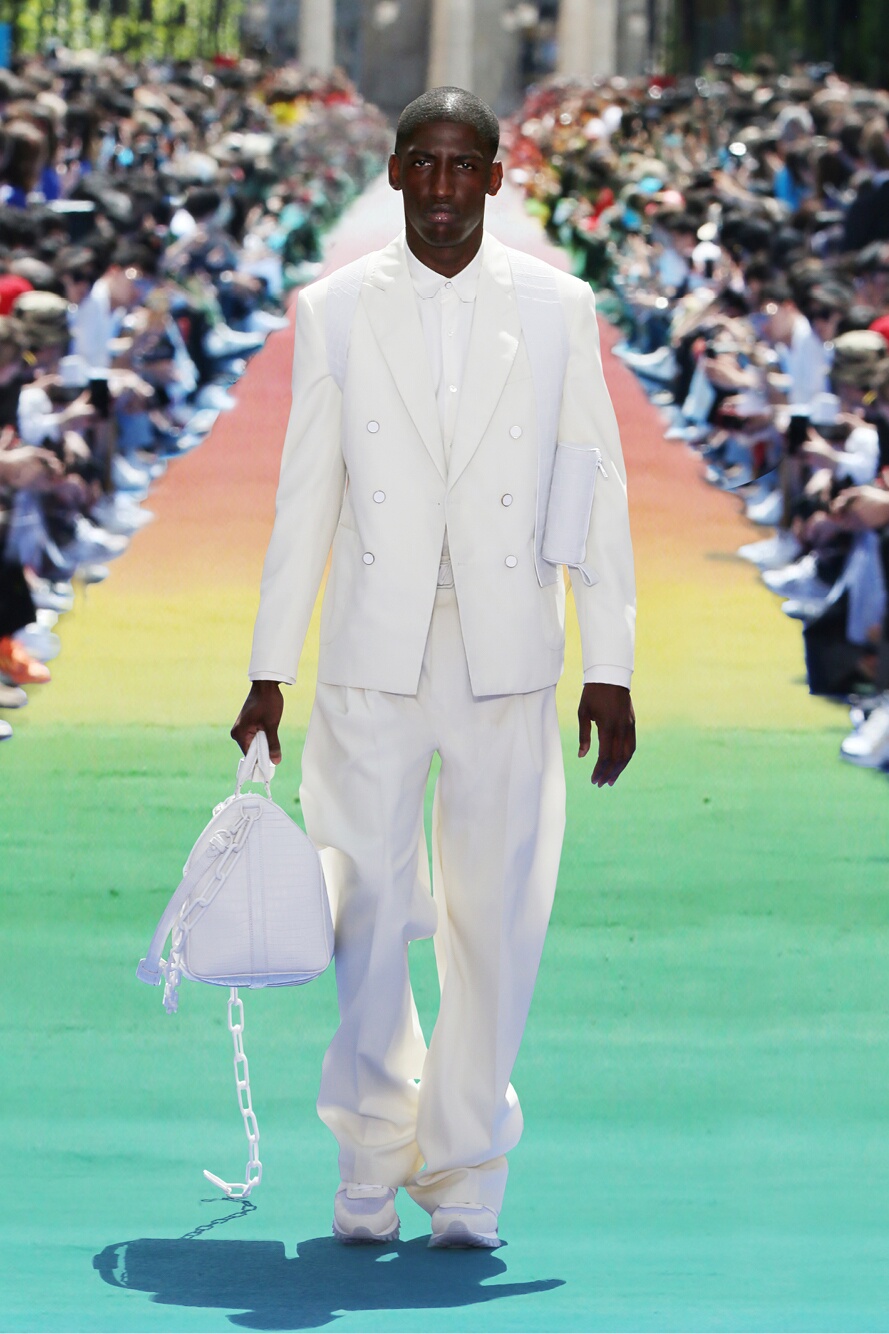 The vocabulary according to Virgil Abloh
A liberal definition of terms and explanation of ideas.

# 3%. The exact ratio needed to twist a normative object into something special.

A Accessomorphosis. A portmanteau describing the transformation of an accessory into a garment, effectively evolving its functional form.

After party. A social gathering following a fashion show intended for industry guests but made great by the civilian fans of the brand in question.

B Bags. The ultimate expression of utility. For Spring-Summer 2019, bag designs are derived from the icons of Louis Vuitton and treated with Virgil Abloh’s 3% methodology.

Biography. Born in 1980, Virgil Abloh was raised in Rockford, Illinois. He earned a civil engineering degree from the University of Wisconsin in 2002 and an MA in architecture from the Illinois Institute of Technology in 2006. Abloh served as creative director for Kanye West until launching his first label, Pyrex Vision, in 2012. The year after, he established Off-White. Virgil Abloh joined Louis Vuitton as Men’s Artistic Director in March 2018.

C Collaboration. A creative partnership between people or brands in which Virgil Abloh has often engaged in the past. Likewise linked to the business of Louis Vuitton for over a century, the Spring-Summer 2019 collection features no collaboration.

Collar. A shirt or jacket component indispensable in the codes of formalwear – a sector native to Louis Vuitton and foreign to its designer – its tips are clipped as a mark-making gesture of irony. “Virgil Abloh was here.”

Designer. “I don’t call myself a designer, nor do I call myself an imagemaker. I don’t reject the label of either. I am not trying to put myself on a pedestal, nor am I trying to be more, now. I would like to define the title of Artistic Director for a new and different era.” –Virgil Abloh.

Dorothy. A farm girl from the Midwest transported to Oz, a fairy tale land where she experiences things beyond the reach of her imagination. As an outsider, she soon discovers she was taken to Oz for a reason.

E Exposure. An apparatus recognized by designers in the social media age of fashion. Can lead to Artistic Director positions at Louis Vuitton.

F Fandom. A two-way worship between a designer and his clientele, fashion fandom mimics the codependent relationship between performer and supporter, a connection native to music and sports scenes.

G Gloves. Coverings for the hands employed by Virgil Abloh to accentuate the signature accessories of Louis Vuitton, the colors of gloves are purposely matched to the leather goods with which they are paired.

Graphics. A signature facet in the work of Virgil Abloh, graphic ornamentation no longer takes the form of prints but evolves into artisanal insignia, handembroidered, flocked and off the grid. It is hand-placed individually by Virgil Abloh.

H Halo. A circle of light formed around a fashion house and its collections encompassing the complete creative sphere and significance of a designer.

Harnessing. A term denoting a means of safekeeping, and the conversion of a decorative object into useful ornamentation.

I Irony. The philosophy of a new generation. The presence of Virgil Abloh at Louis Vuitton.

J Jewelry. Objects of decoration often characterized by an all-thatglitters- is-gold understanding of ornamentation, the Spring-Summer 2019 jewelry appears in ceramics or unrarefied metals denoting a contrasting celebration of non-precious materials.

K Kanye West. A mentor and friend to Virgil Abloh.

L Long-windedness. “A blessing and a curse.” –Virgil Abloh.

Luxury. A label determined by values, codes and qualities, its use and definition were the privilege of few until a new generation conquered its dominion and shifted the paradigm for good.

M Margielaism. A term applied to garments or accessories which reflect the normative fashion religion of a reverent generation of young or younger designers to which Virgil Abloh belongs.

Millennial. A term applied to consumers born between the late 1980s and 1990s, often linked to markets associated with Virgil Abloh, a non-millennial designer with millennial sensibilities.

Model. A person identified by the anatomical, racial and cosmetic features of his appearance. Or, by his artistry, individuality and personality.

N Normcore. The irony of a generation raised on extravagance, and the makedo and mend sensibility of those with access to it.

O Off-White. A greige gradient of white, which alters a component familiar to all. It serves as a blank canvas for perception and interpretation.

Oz. A fantasy land visited by country girl Dorothy in the 1939 film The Wizard of Oz. Upon arrival after a cyclone transports her there, she tells her dog, “Toto, I’ve a feeling we’re not in Kansas anymore.”

Poppy. A ruby red flower, whose exceptionally fragile structure is contrasted by its psychedelic, narcotic properties and hallucinogenic powers.

Production. A metaphor for finding drama in subtlety, the Spring-Summer 2019 audience of threethousand people is formed by the fashion industry and specially invited students. It creates an atmosphere representative of the dual demographic which will be wearing the collection at hand. Set in the gardens framed by the galleries of the Palais-Royal, sand is rendered like a rainbow while selected guests wear corresponding t-shirts, effectively activating the show through attendance.

Psychedelia. Originally a term for art created through means of intoxication, it describes an innocent sense of elation observed in trippy color formations and kaleidoscopic motifs.

R Rainbow. A kaleidoscopic palette evolving from off-white to polychromatic, synchronously forming a holographic archway known to represent dreams. A motif in The Wizard of Oz, which provides construct to the Spring-Summer 2019 collection.

Rationale. The underlying method of the Spring-Summer 2019 collection, looks are generally designed and styled employing the construction of a top layer, a bottom layer, a mid-layer and an outer layer.

Rockford. The Illinois town in which Virgil Abloh grew up, where Midwestern practicality and utilitarian workwear defined the
popular dress sense, effectively creating an unintentional take on anti-fashion.

S Shoes. The wardrobe component most immediately indicative of an era or movement, each shoe design finds its origins in a sports or vintage culture, from 1960s’ Chelsea boots to the golden era of 1980s’ basketball trainers.

Silhouette. “Revert against stiff and formal. Look as comfortable as you
feel.” –Virgil Abloh.

Sock. An unsung everyday necessity first covered in rhinestones by Michael Jackson in 1983, inspiring a generation of kids to elevate normality. As a child, Virgil Abloh became an early appropriator of the glitter sock.

Soundtrack. An inherent musical juxtaposition staged between a psychedelic jazz intro by BADBADNOTGOOD, which crescendos into I Thought About Killing You by Kanye West.

Staple. A twisted piece of metal that holds two elements together. A term for the essential garments and accessories in a wardrobe.

Streetwear. A predictable clothing genre in a renegade designer’s debut collection as part of the fashion establishment, but one whose sportswear properties are undergoing a critical transformation into luxury.

Styling. Once simply the addendum to a designer’s collection, it now serves as a contemporary fashion tool offered by a designer to the public as an initiation of ideas and ultimate self-expression.

Sunglasses. An accessory that gives the impression of a complete look in an instance. For Spring-Summer 2019 sunglasses reference eyewear from the Al Capone era of Chicago – Virgil Abloh’s former stomping grounds – and riff on the 2005 Louis Vuitton collaboration between Pharrell Williams and Nigo.

Sweats. “Fashion can either ignore what’s happening in the real world, or partake in it.” –Virgil Abloh.

T Tailoring. The paradoxical uniform of the business man, its suitcaseafflicted creases have become engrained in the anatomy of the blazer, forever folded for travel.

Tie-dye. A homespun take on psychedelia, its trippy effects is often used to illustrate a state of euphoria. The DIY dying technique will hold nostalgic value to those educated at the University of Wisconsin, the foremost hippie college of all time.

Timepieces. Functional fusions between jewelry and clocks that effectively create a process of accessomorphosis, timepieces have been turned into true accessories through the employment of ceramic links in double-wrap configurations.

Tribal. A wealth of motifs identifying a designer’s most original origins and generational pride, they serve as the earliest memory of a boy raised by a Ghanaian tailor mother and her traditional West African garb.

U Utility. Once the luxury of workwear, utilitarian elements now provide fashion with equal parts functionality and pleonasm. It is the usefulness of a multipocket gilet, and the irony of wallet situated at the ankle.

Z “If you’ve made it this far, thank you for your time.” –Virgil. 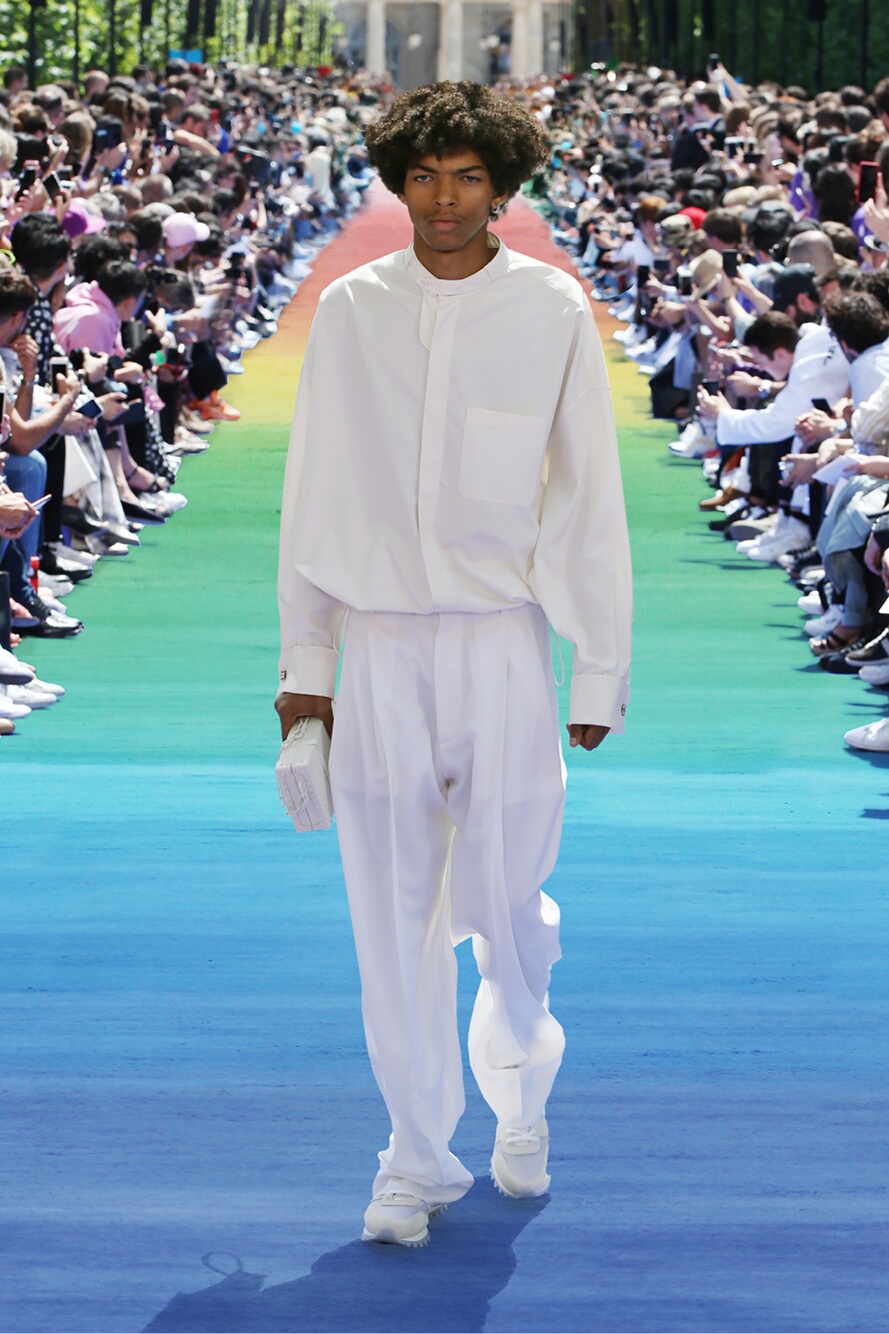 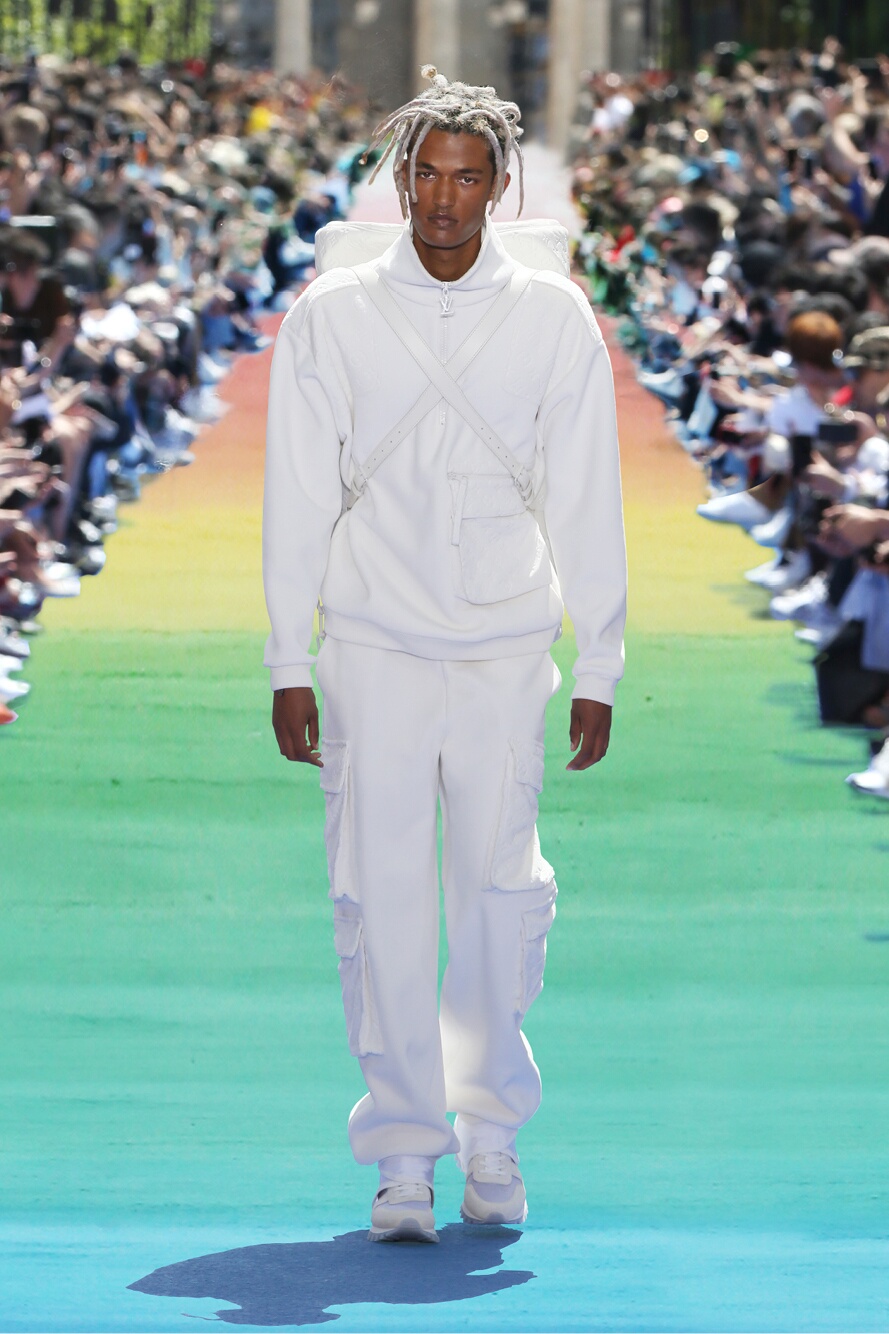 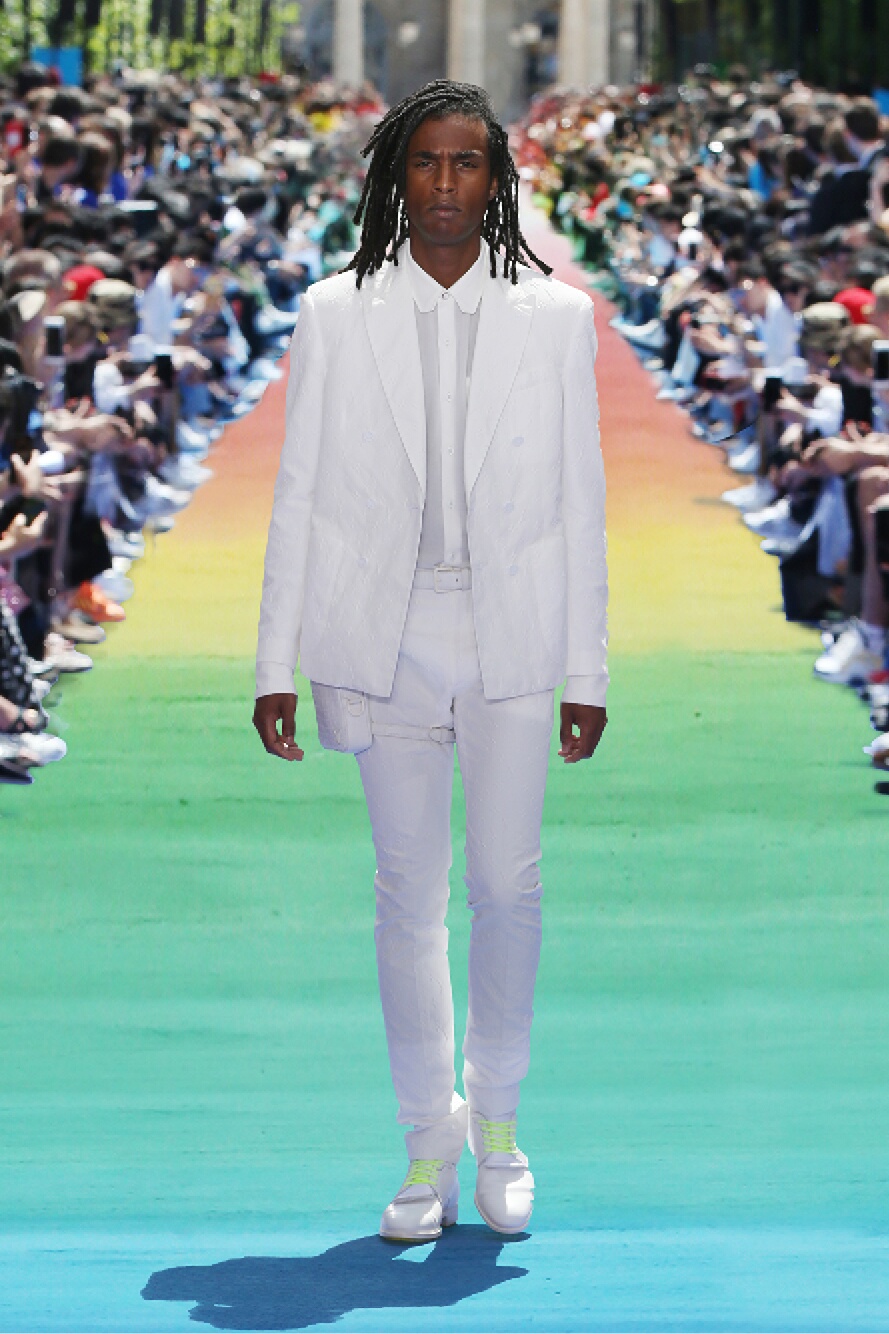 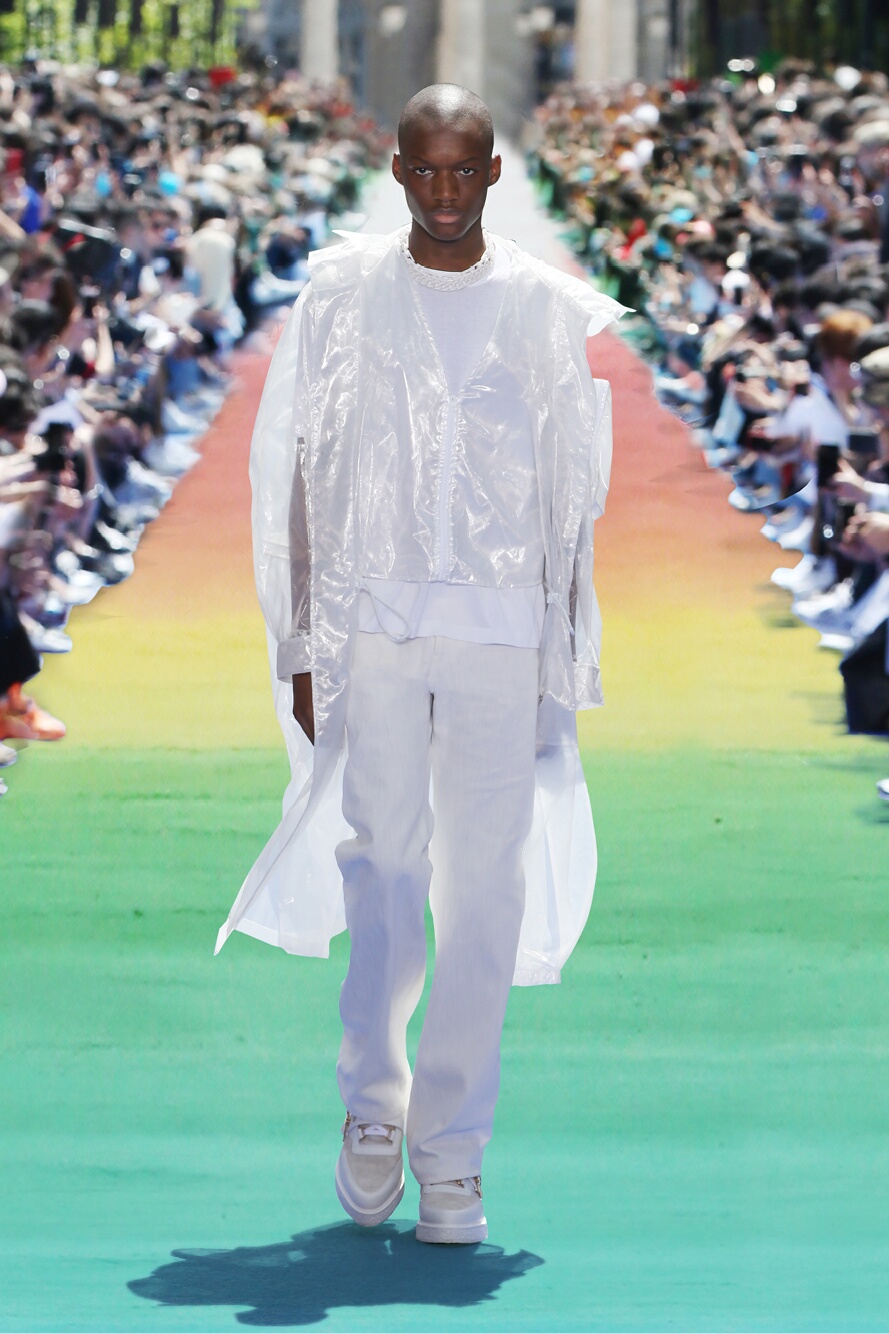 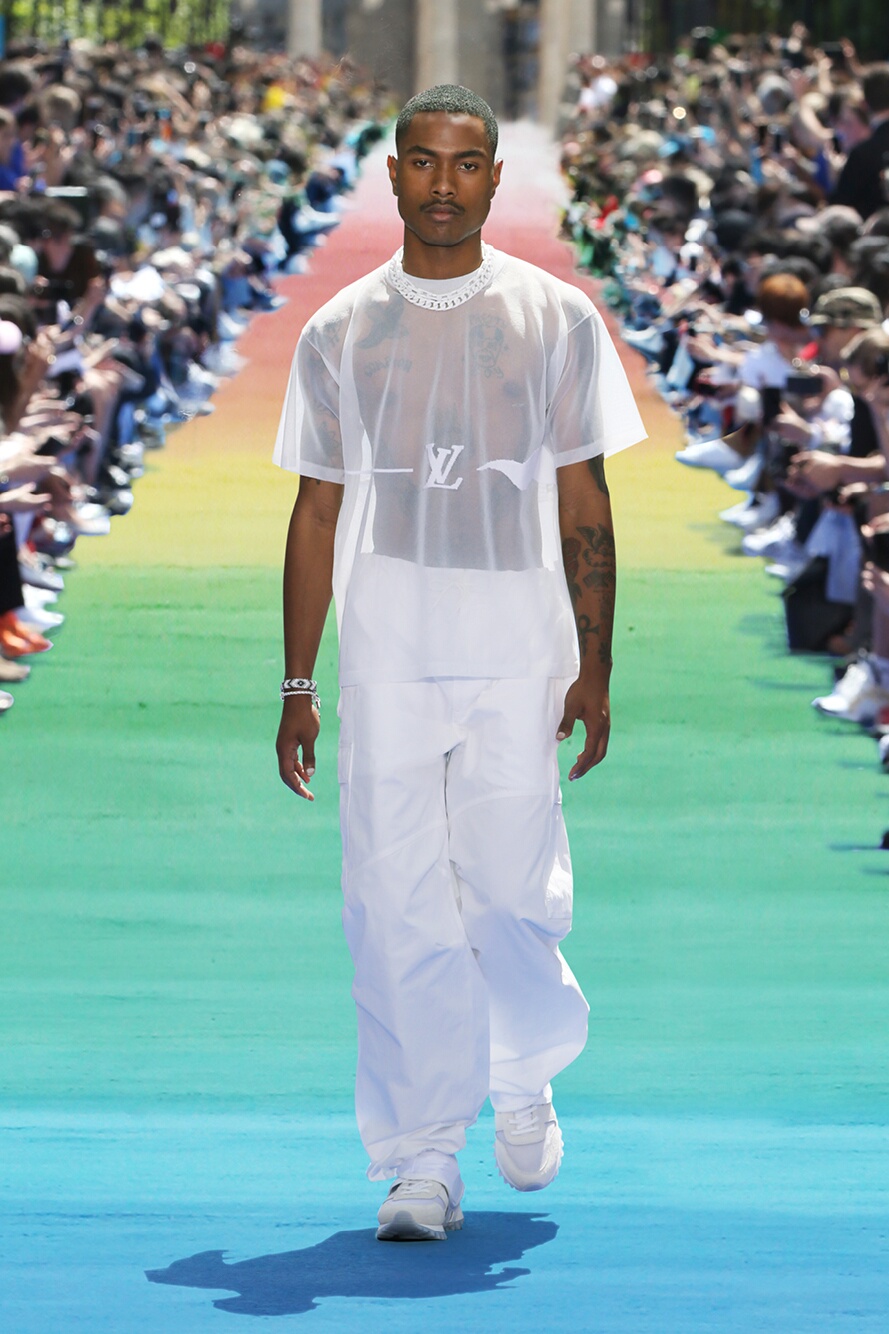