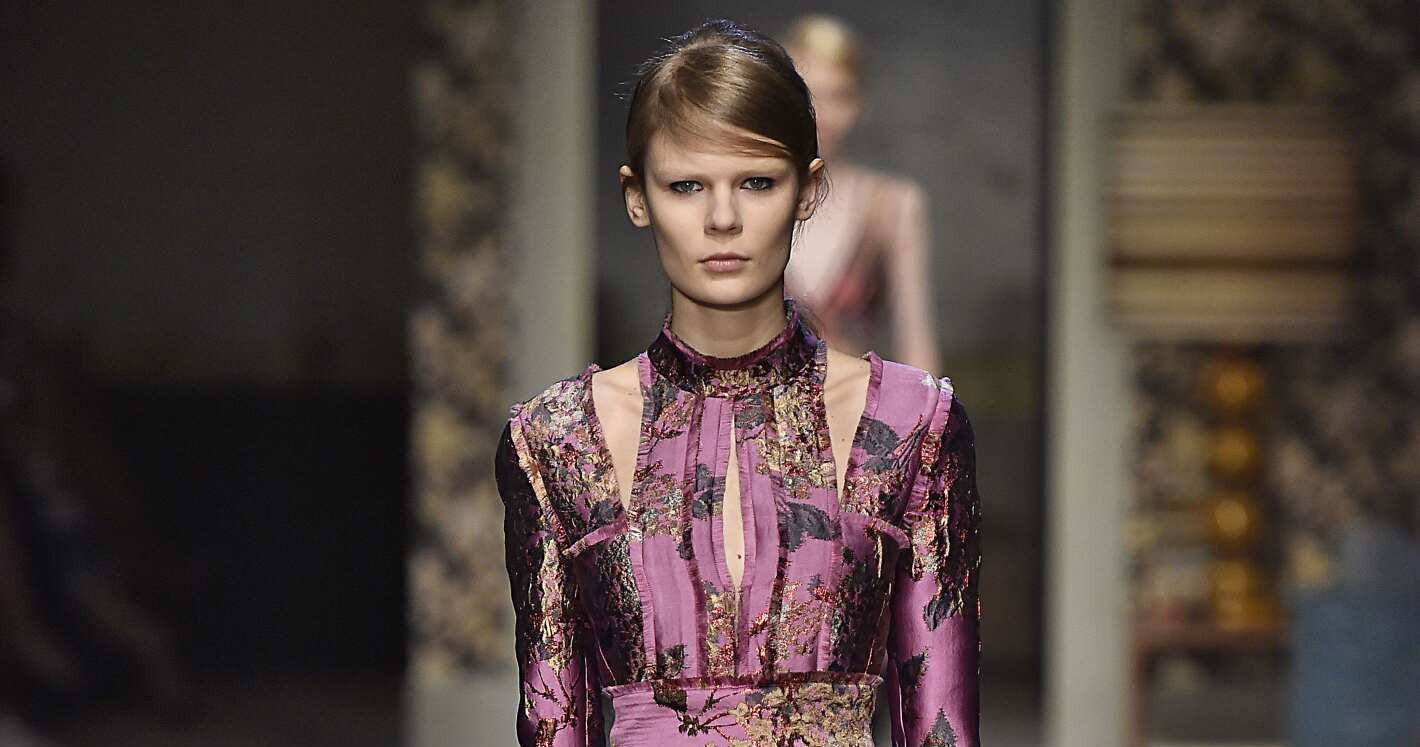 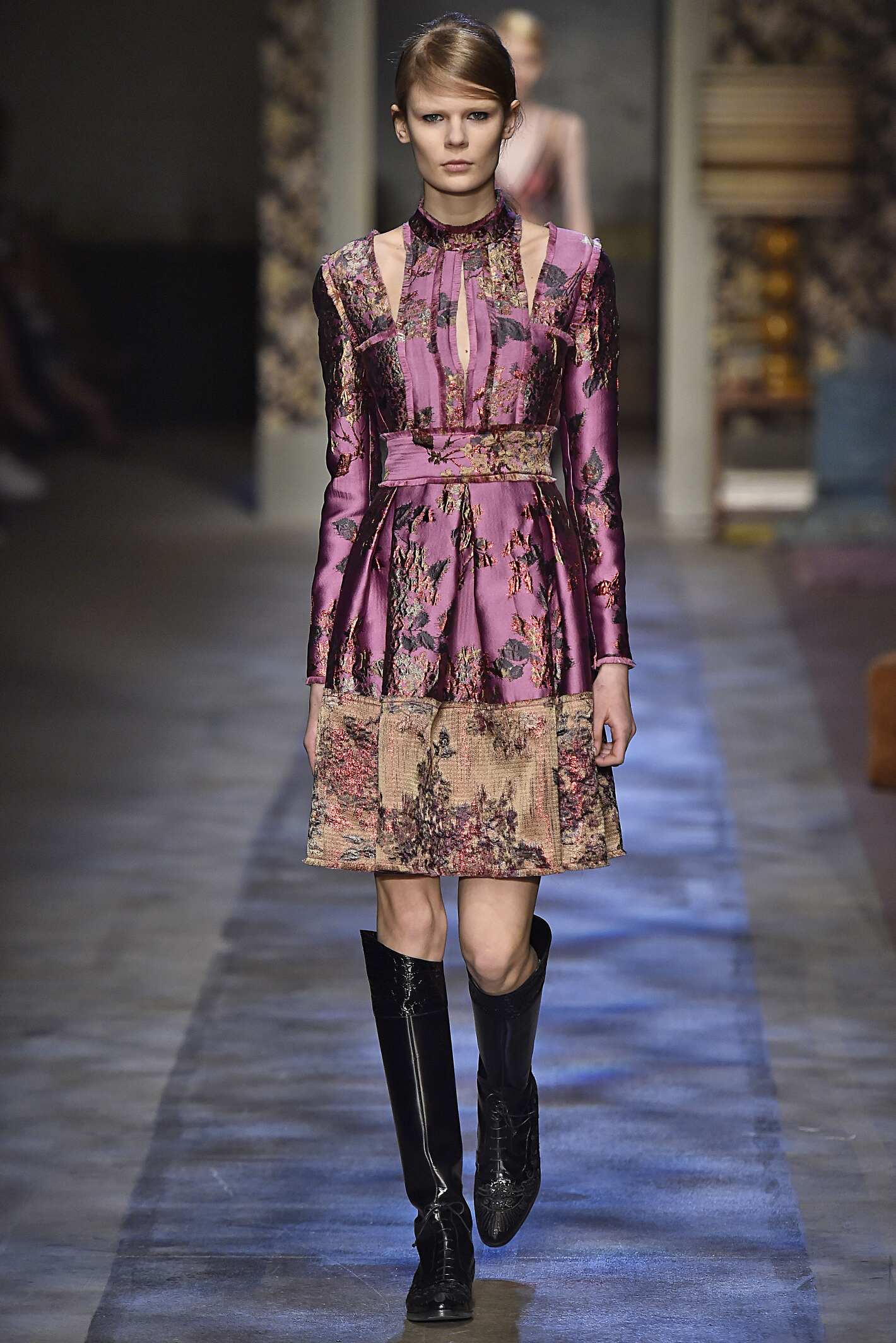 The absorbing depiction of the Parisian apartment of a fictional art collector created by Robin Brown for Helly Nahmad Gallery’s Frieze Masters The Collector, acted as the conceptual impetus for Autumn Winter 2015. A masterful study of character through environment, the notion of building a narrative around a muse captured Erdem’s imagination.

A sense of broken down decorum surrounds his protagonist for the season, the world in which she exists is one of faded glamour where vestiges of an affluent past merge curiously with undeniably modern elements, her wardrobe an amalgamation of decades. The collection acts as a visual memoir of her life through an intense colour palette of regal purple and jewel like hues, applied in offbeat pairings, echoing her peculiarity of character.

The aristocratic richness of materials within the collection is tempered through elements of rawness. Suggestions of loss of grandeur is expressed through metallic jacquards, oddly reversed to expose a textural underside as if through thrifty repurposing, its traditional floral chine intensified through garish accents now revealed. Elsewhere mid-century dress making techniques are explored with pinked antique jacquard cut by hand and then re-stitched to achieve a collage effect, distressed texture found within its fragmentary composition.

A nod to the romance and realism of Visconti’s A Conversation Piece, Erdem explores the clash of culture within her world through transitional pieces where needle punch techniques allow a blending of opposing fabrics; a utilitarian camel coat in weighty wool seamlessly melding with and unexpected rich and ornamental jacquard. Elsewhere luxuriant leopard printed fur coat, an imagined 1950s heirloom, is seemingly and incongruously patched with a wild 1970s shearling back.

Throughout, her imagined surroundings are implied, oval and damask motifs suggestive of stylistic 1960s wallpaper are applied to textural cloque and elsewhere found as guipure lace where delicate contours are engineered around the body, high necked on an organza base to emphasise form in dramatic bold colour combinations. These baroque, sculpted silhouette garments are paired with equestrian inspired boots by Nicholas Kirkwood, underlining the odd, irrational style of Erdem’s muse.

A theme of reveal and conceal, allowing an underlining sensuality from outwardly ladylike designs, continues with the damask motif applied to cutwork midi length, long sleeved leather dresses whilst a rose crested fil coupe balances short hemmed translucency with embroidery-panelled laced ankle-boots and an ostensibly Victorian ruffled high neck – a nod to the contradiction within our muse.

This allusion to the golden age of Alta Moda is interrupted and cleverly juxtaposed with the glacially restrained silhouette of the classic Hitchcock anti-heroine form, lending an urbane air through pencil skirted suiting and rounded shoulder outerwear worthy of Kim Novak. The theme of texture continues through tailoring, with hounds tooth Italian tweed left raw and frayed.

The irreverent nature of our muse and her transitory world is epitomised in a speckled narrow engineered rib knit, transmuting seamlessly into a fil coupe gown of unexpected volume and adorned with ostrich in a declaration of tenacity, achieving enduring allure through adversity. 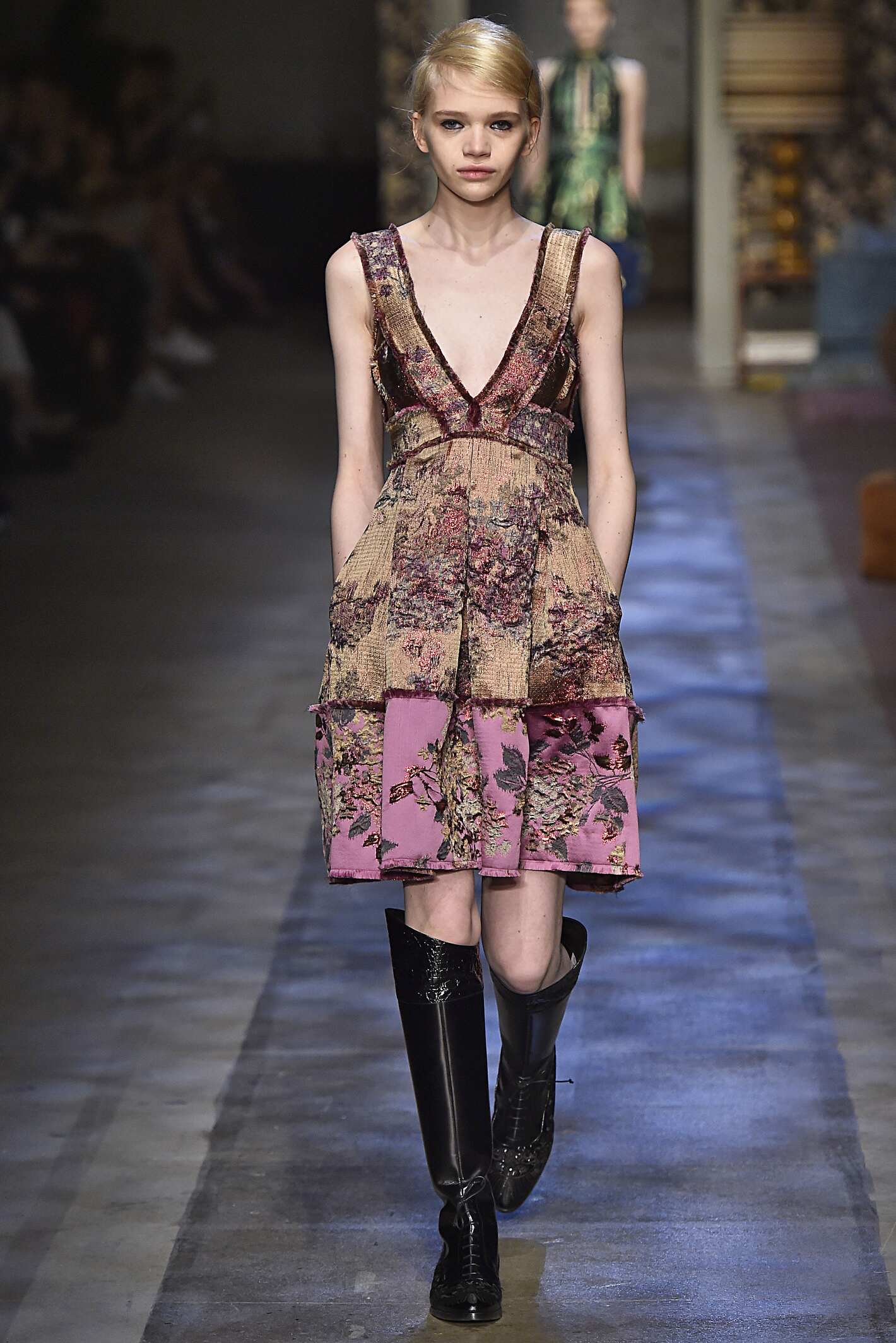 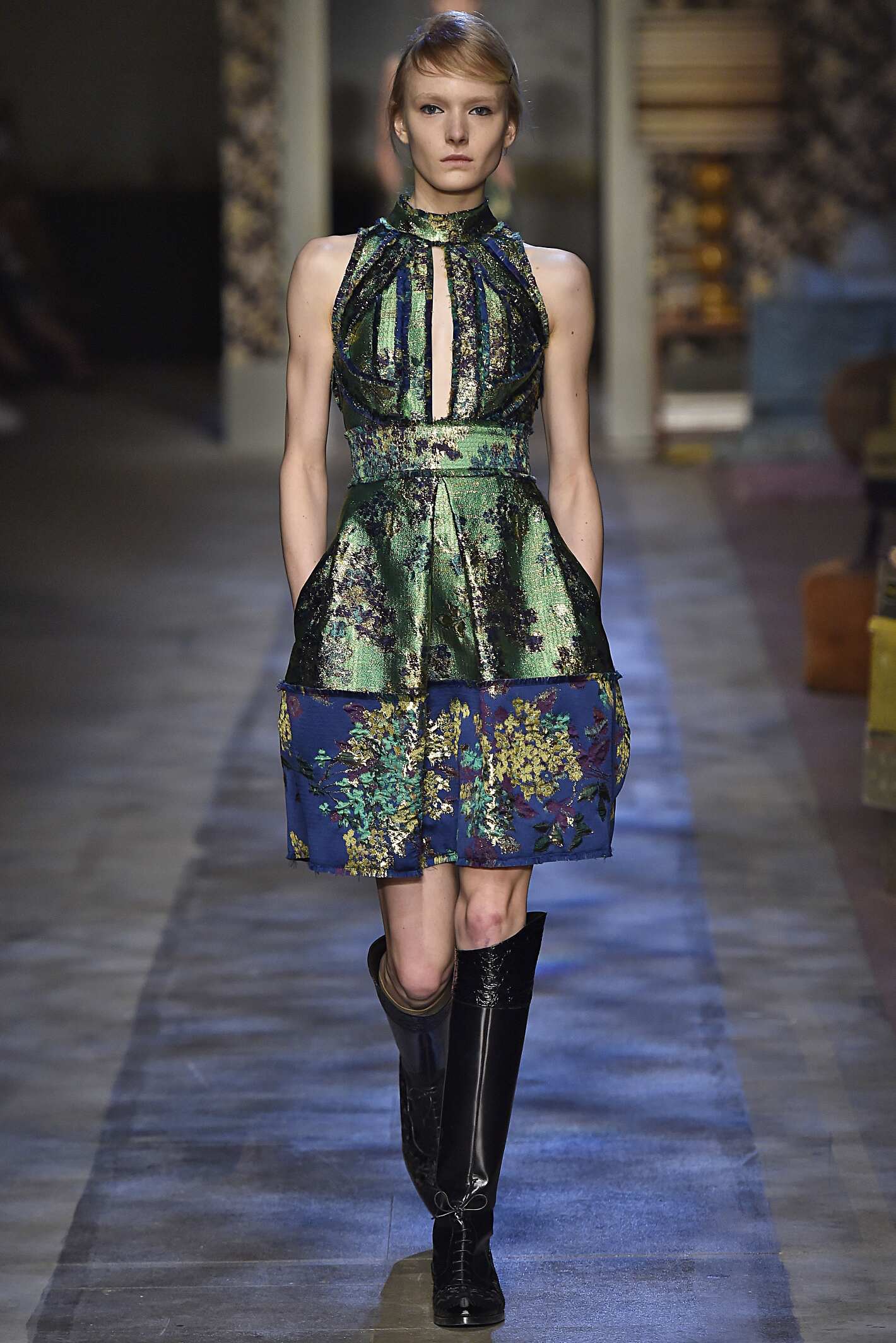 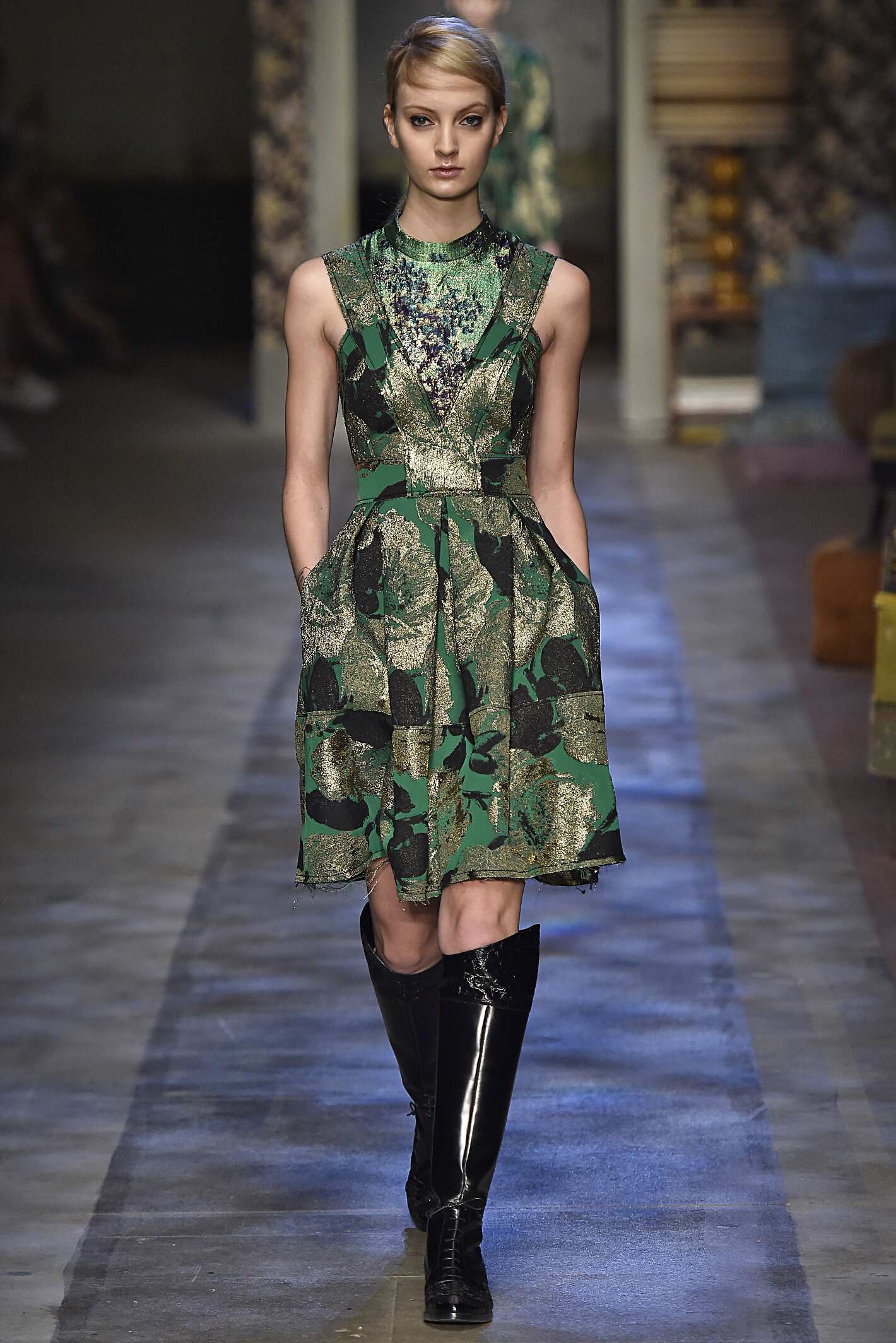 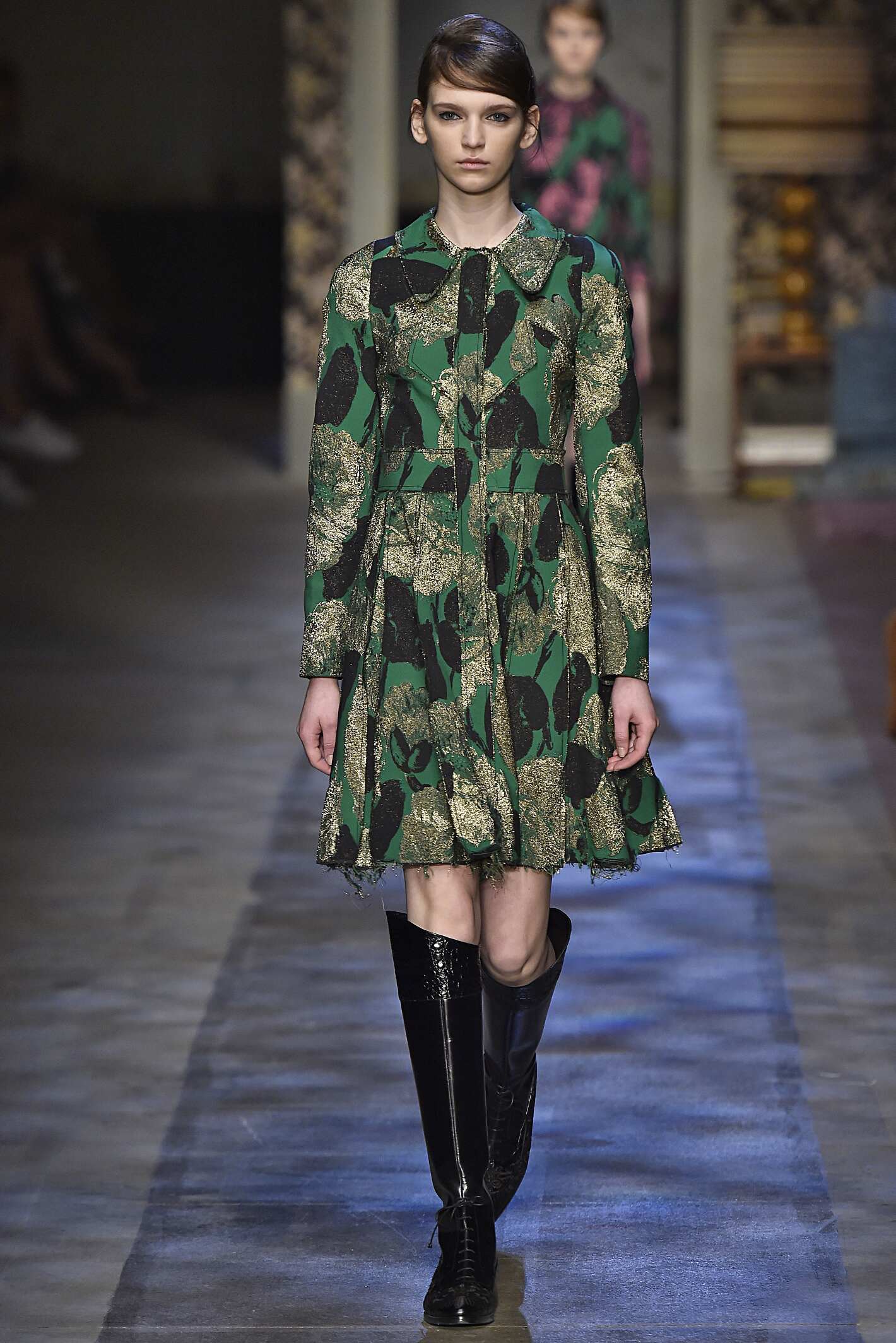 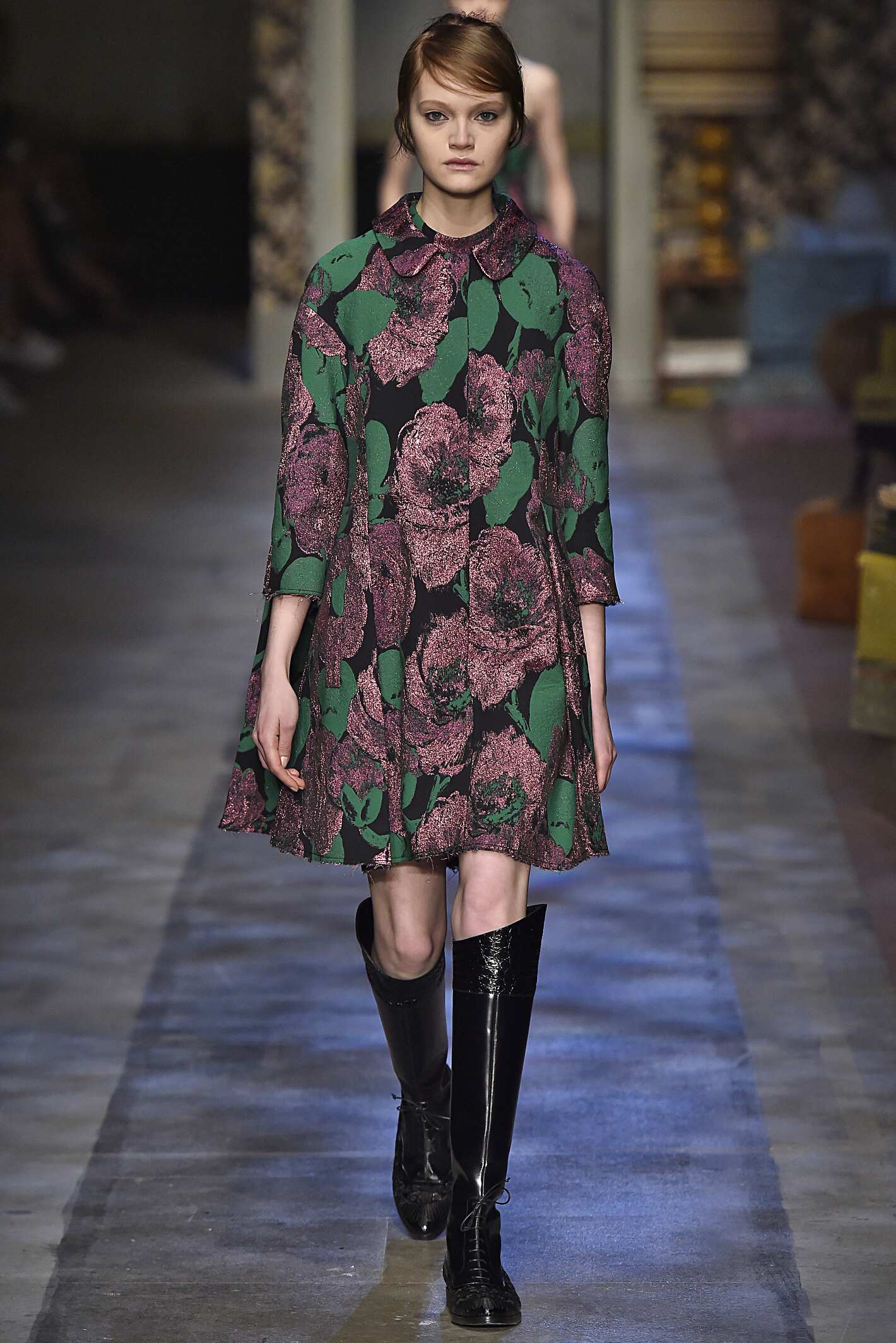