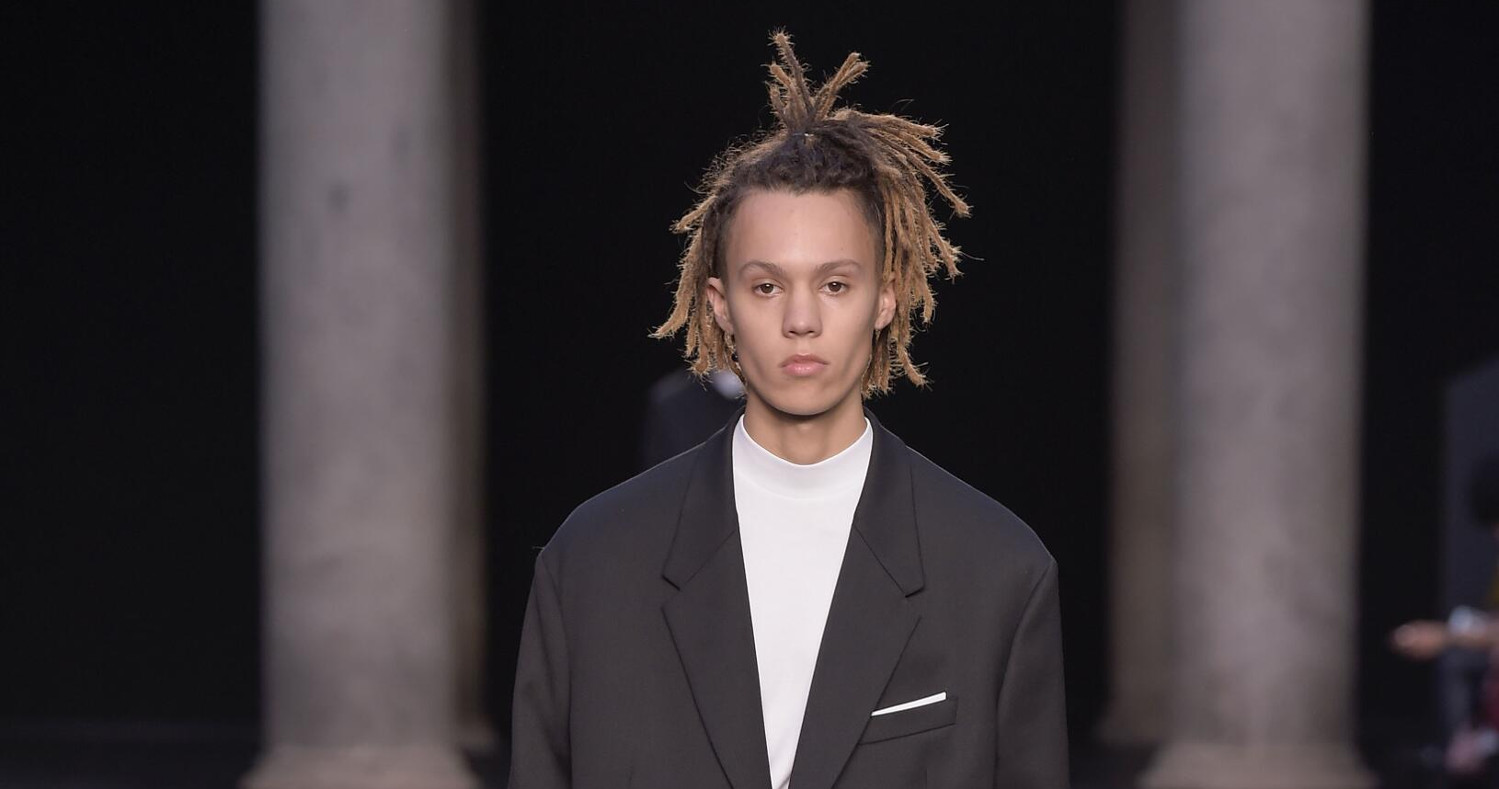 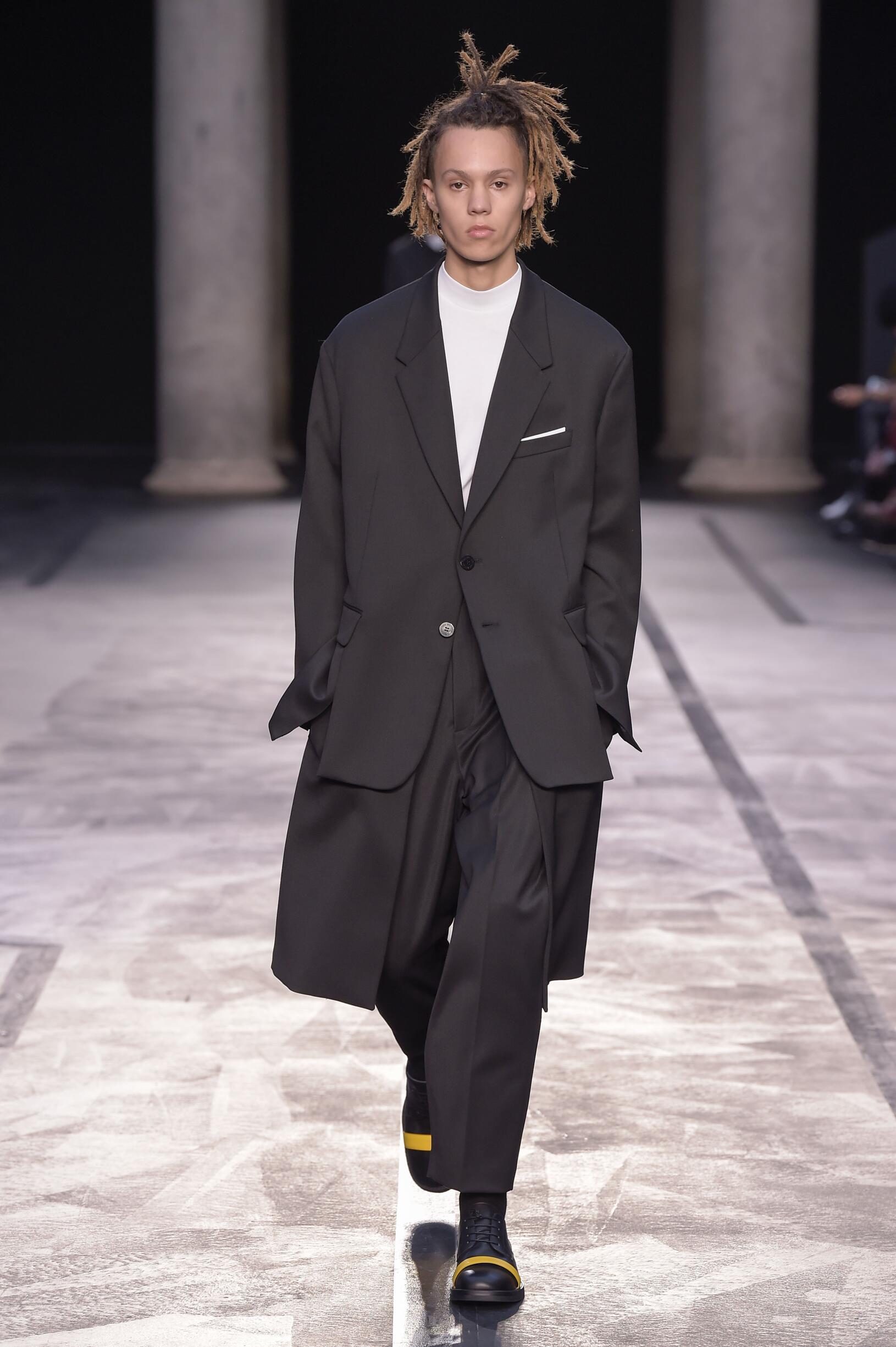 For his Autumn/Winter 2017 collection, Neil Barrett looks at thè past – his own, and that of his label – and reinvents it for thè twenty-first century. The foundatlon Is tailoring: a Nell Barrett hallmark, and thè root of proportlon In men’s clothing. Barrett focusses his attentlon on tradltional men’s sults, using them as a template for an exploratlon of proportlon and volumes.

Influenced by his art collage years In 1980s London and his family’s traditlon as milltary tallors, Barrett mlxes dlfferent flts In a litany of tailoring and coating fabrics, to create new silhouettes for his man. They have an echo of thè past, but feel resolutely contemporary.

Oversized jackets and coats sport a dropped shoulder, but are tailored to fit perfectly around this volume, contrasting with drainpipe trousers or knit joggers. Slender jackets are worn above wide cropped pants. The notion of thè hybrid is key: a hybrid silhouette, oversized or slim, is a signature.

Garments fuse elements of sportswear and tailoring, cutting track pants in tailoring fabrics with press-stud side fastenings, or trimmed with a sports stripe, sometimes painted. There are also hybrid garments, cross-breeding long coats with puffer jackets, jean jackets and biker styles, as well as single and doublé breasted suit jackets. The two can be separated, but fused together they form a unique proposition.

If tailoring forms one line of heritage, thè other comes from thè dynamic energy of thè 1980s. The street-style of thè eras magazines and thè style dubbed Buffalo is evoked in thè flashes of bright colour, reinterpreting Nick and Barry Kamen’s look. Yellow, red, hazmat orange and cobalt combine with an otherwise restrained palette of black, grey and white.

Underscoring thè influence of thè eras are lyrics from thè songs of Echo & The Bunnymen and The Cure, alongside graphic treatments derived from tour imagery of Siouxsie and thè Banshees, with permission from thè artists to use and rework their originai imagery. The show features their music on thè soundtrack, alongside modern musicians influenced by their legacy.

Contemporary counterparts, new iterations, like thè clothes on show. Looking back at Neil Barrett’s heritage inspired him to combine mens and womenswear in a single show, for thè first time in a decade. The women collection underscores thè fundamental themes of thè menswear – new volumes in tailoring, pops of primary colour, a fusion of sports and suiting.

The dropped shoulder is exaggerated above a drawn-in waist, while high slits allow slithers of brightly-coloured layers to show. Slashes under sleeves allow sensuous glimpses of skin under tailoring and shirting, adding a touch of thè feminine to thè quintessentially masculine.

Mens and womenswear share fabrics: nylon is a key contrast to traditional tailoring in pinstripe and chalk-stripe flannels, alongside coating wools and cashmere and fluid viscose-wool gabardine. Knits add texture and pops of brilliant, saturated colour, elongated into dresses for women and match with shirts for unconventional “twinsets” for men.

They are executed in slick technical knit yarns, intensely hued, or in mohair – a punk stalwart here used for intricate intarsia designs. The brilliant shades of thè knits are echoed in block-colour nylon shirts, and in details like hand top-stitching cross squared-toe boots, or straps of leather across trousers, shoes or utilitarian bags. The entire collection is a play on past and present: reinventing thè styles of thè past with thè proportions of today. 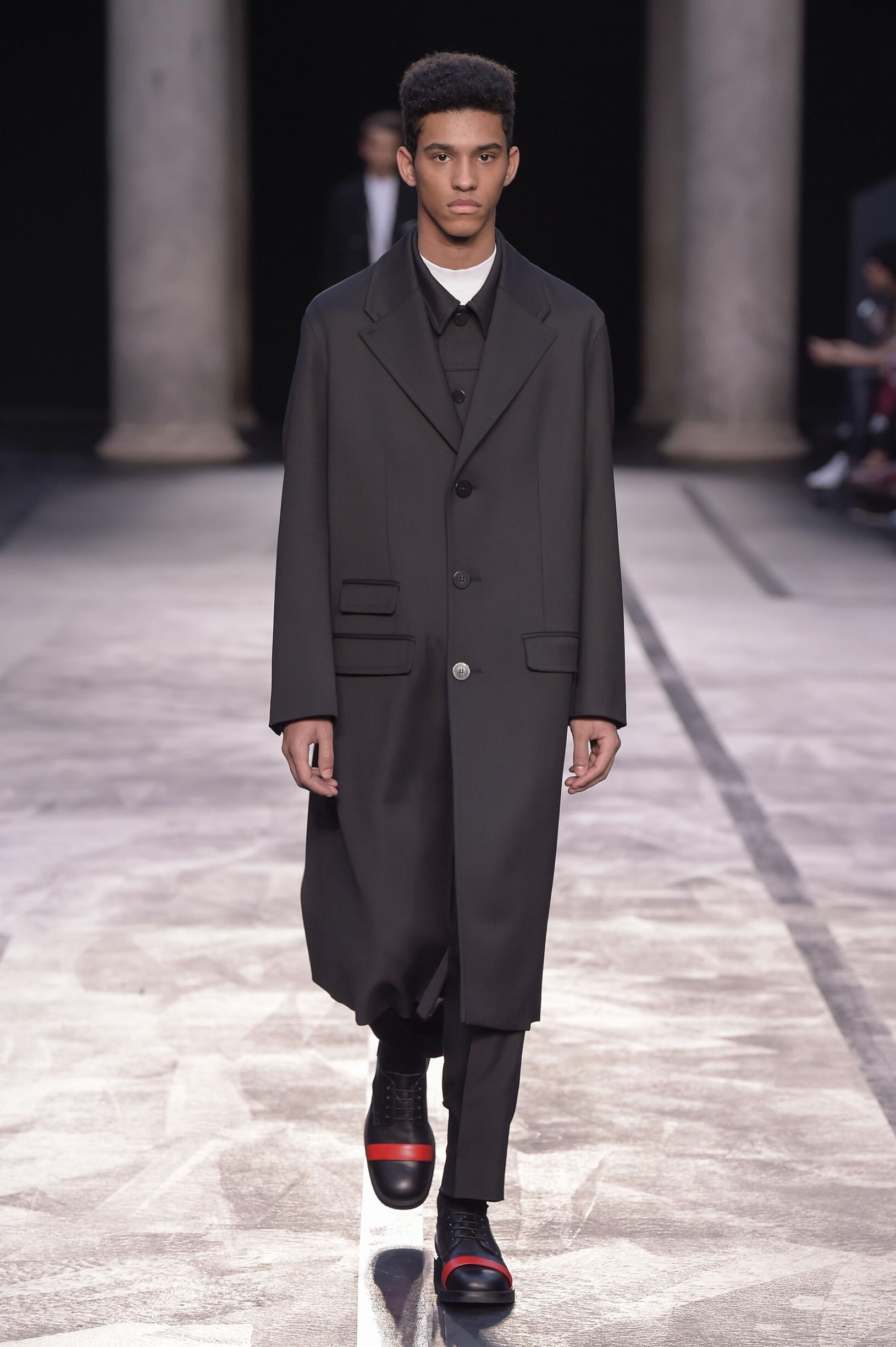 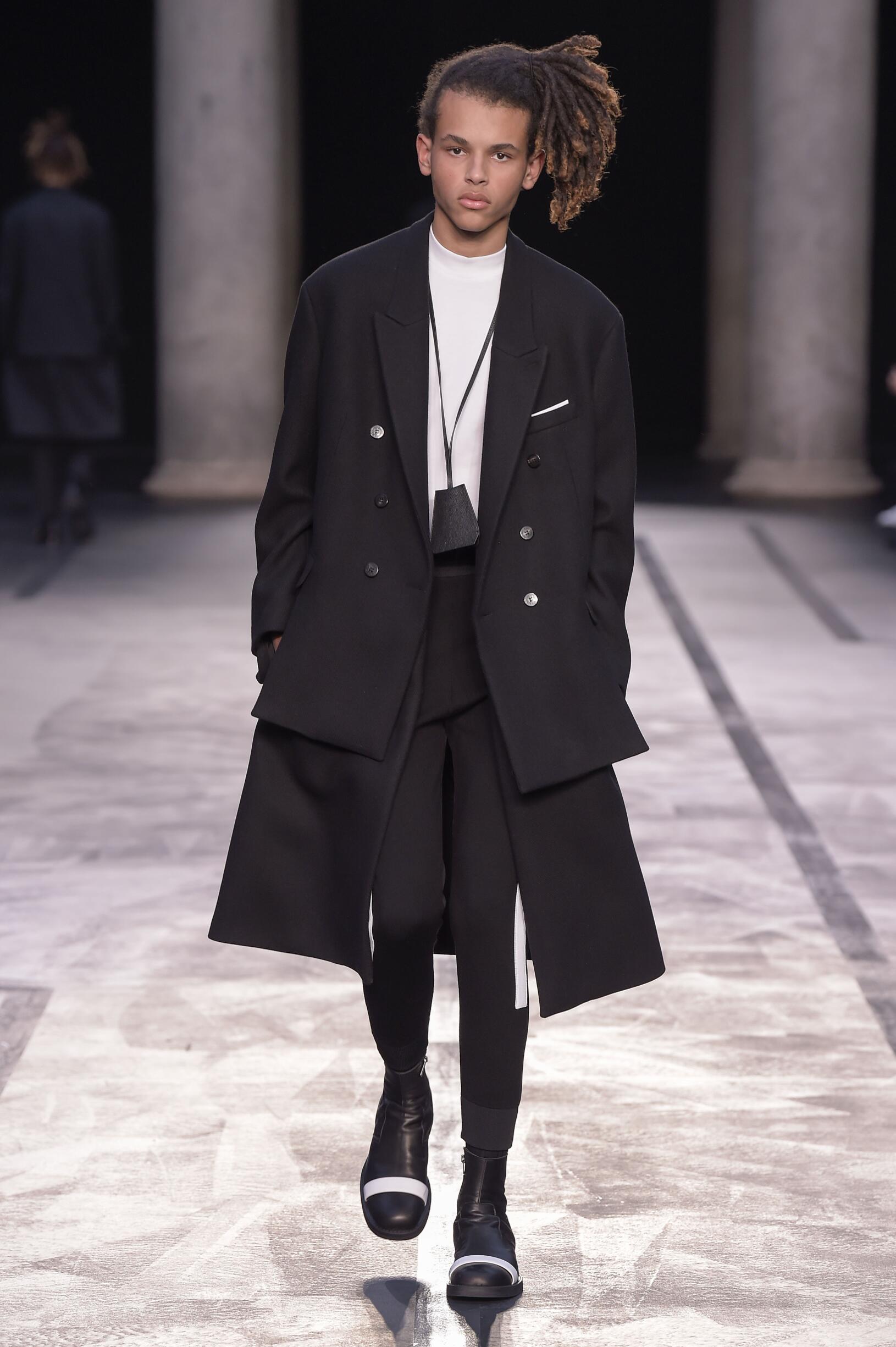 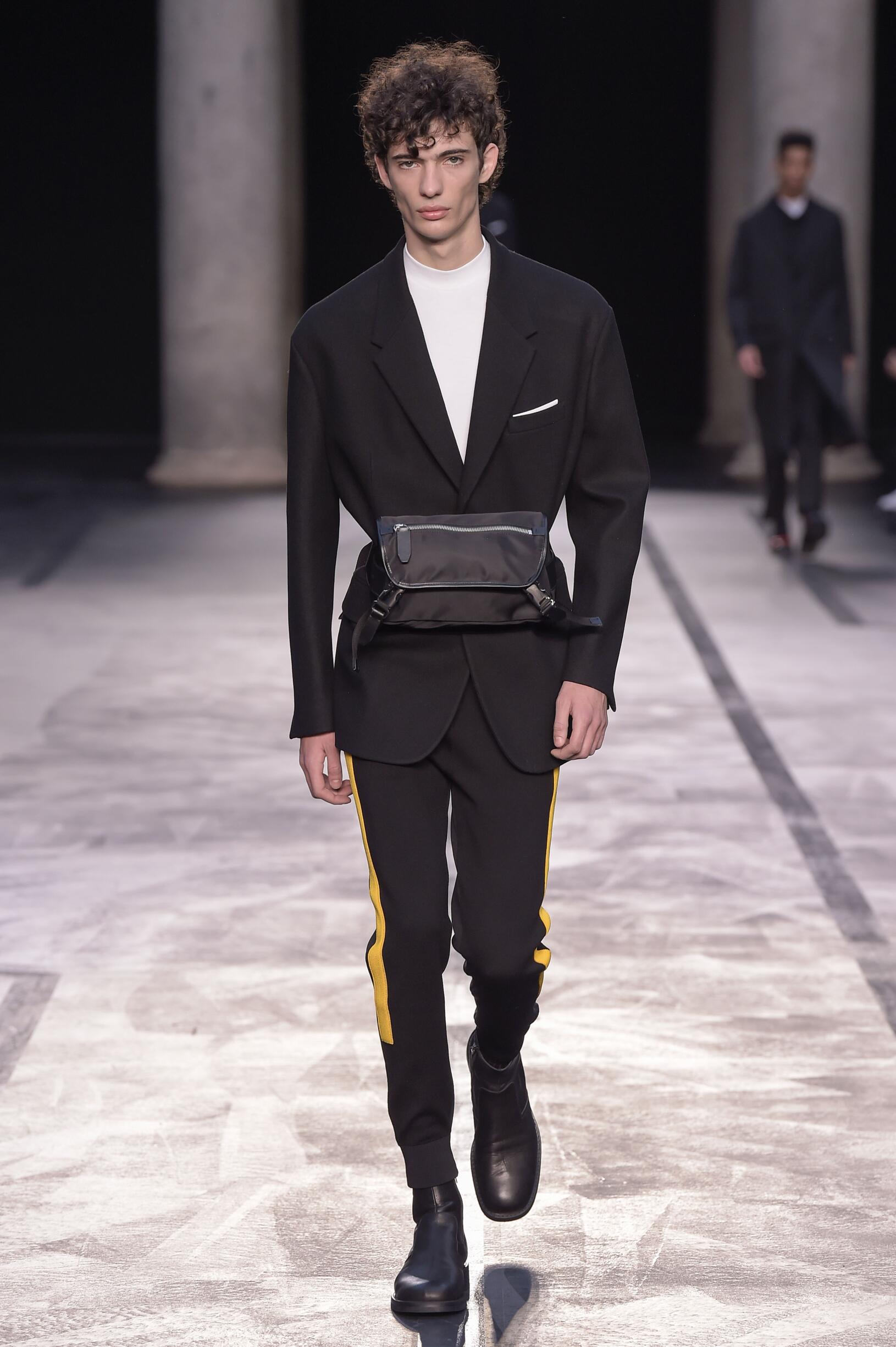 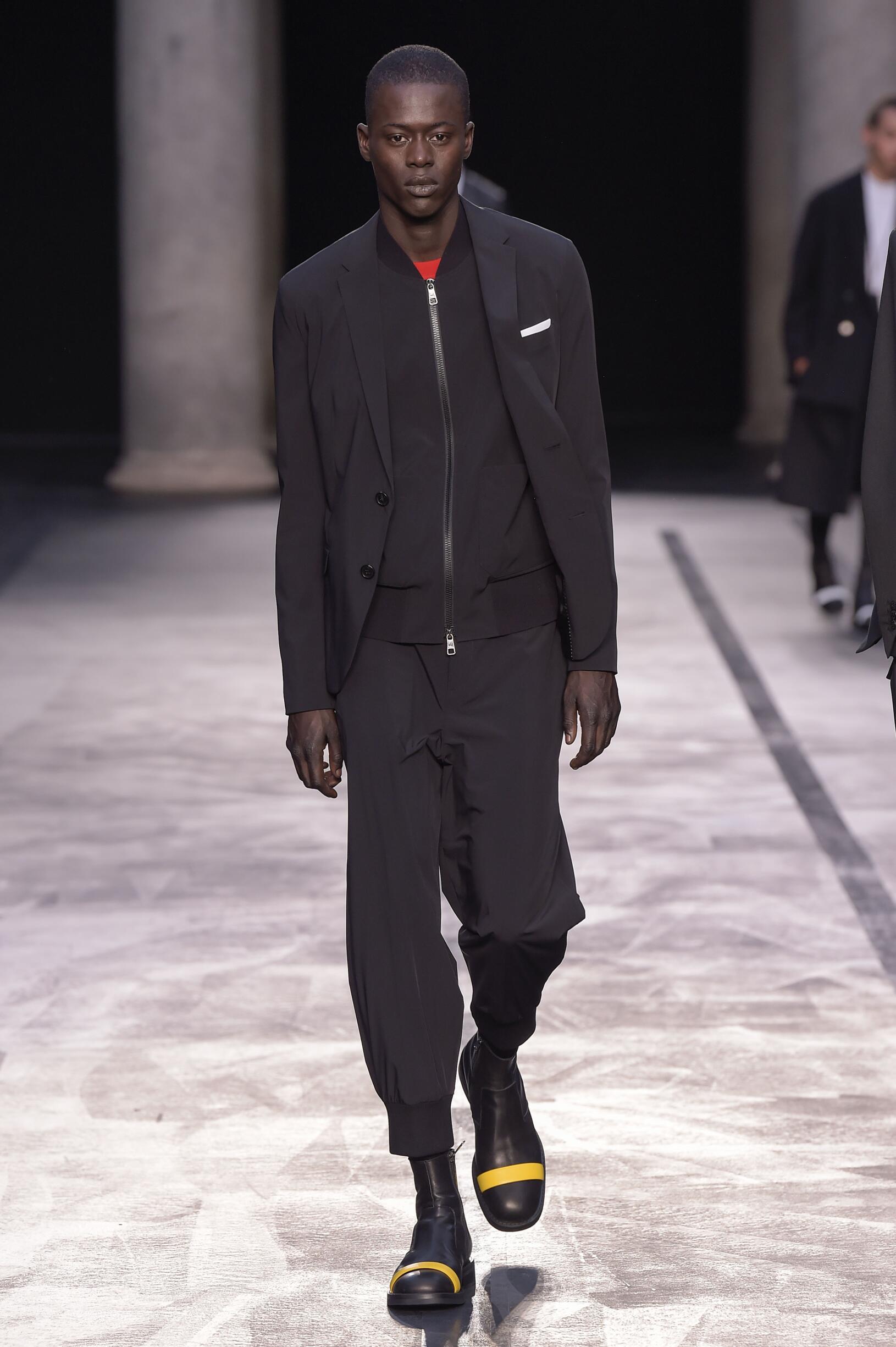 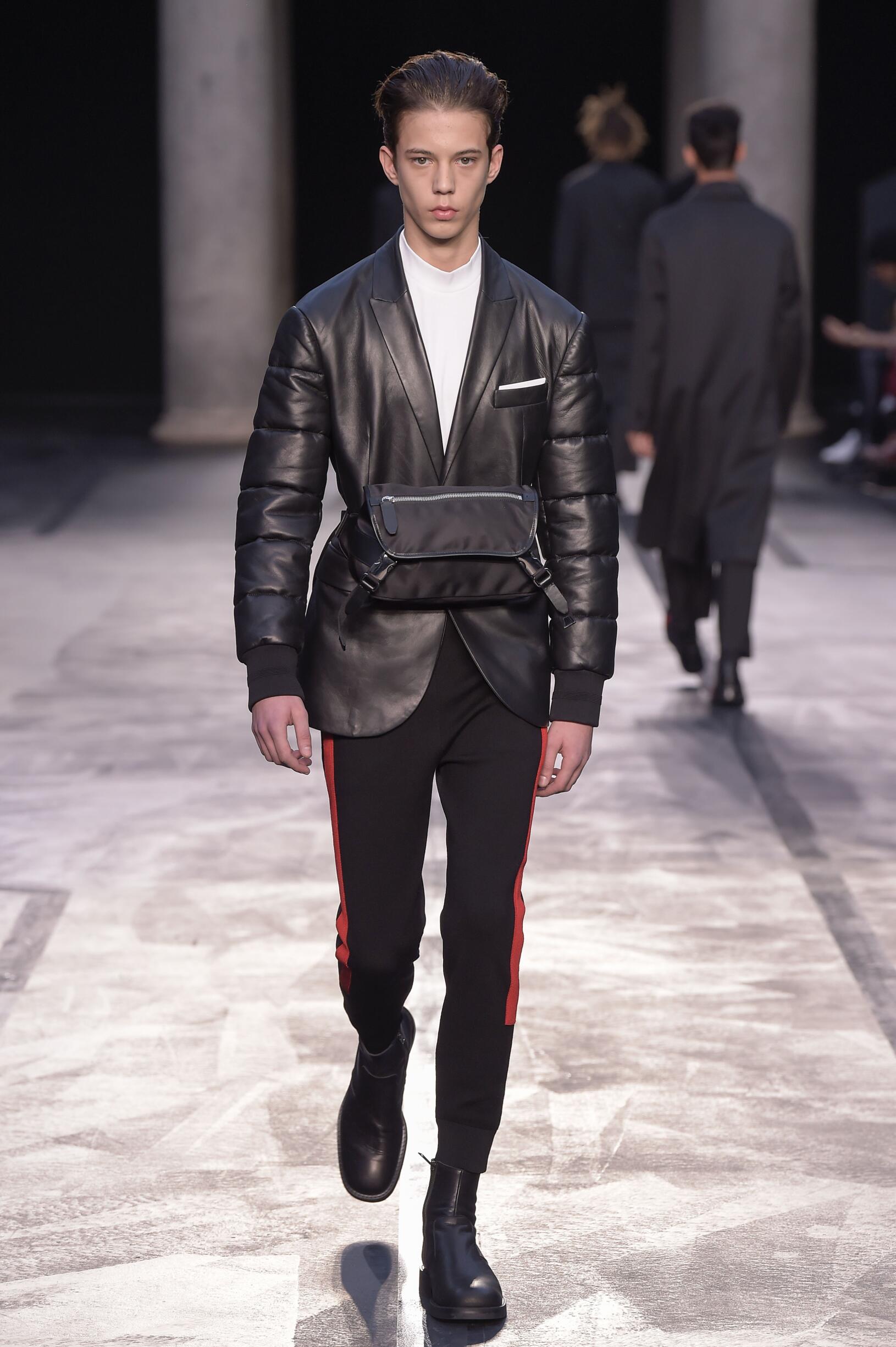