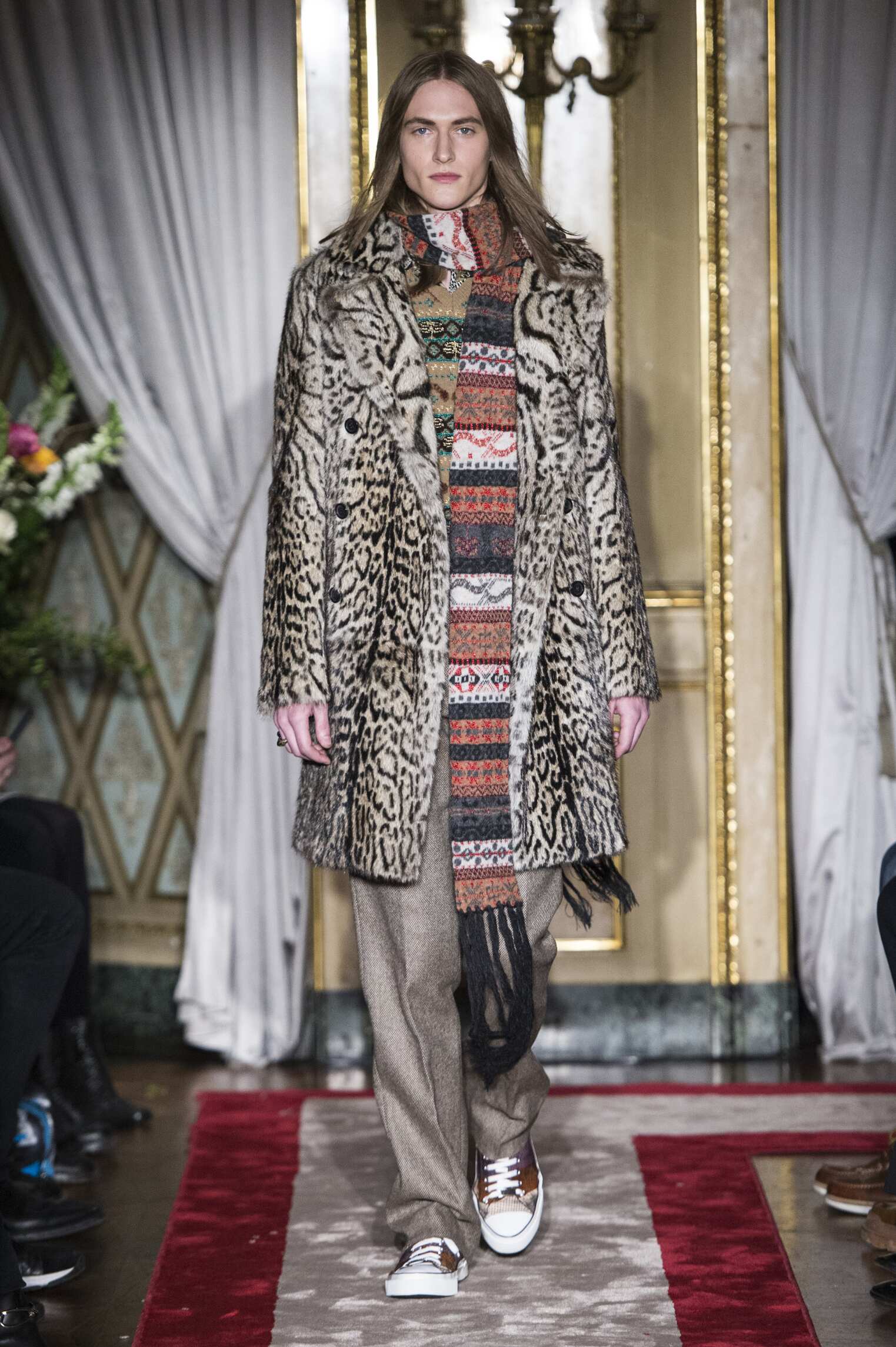 In his first menswear collection for Roberto Cavalli creative director Peter Dundas establishes a blueprint for the new Cavalli man, proposing a wardrobe for the twenty-first century dandy. The fall 2016 collection is the first step inside his wardrobe – a mix, a melange, a melding of casual and tailored elements, juxtaposing the precious and the everyday. This is clothing you can believe in, but still fantasise about. An homage to opulence, but also to reality.

They epitomise the era’s fusion of elegance and extravagance, a fluid sexuality that never less had nothing androgynous about it. The fall 2016 Cavalli man is presented as a rock icon, his masculinity made even more potent by the touches of femininity in his attire. The mood is of bohemia. The collection riffs on a new Cavalli menswear vernacular, pulling archetypal pieces from the Cavalli archives, but reinvigorating them with a contemporary energy. Animal prints, intricately worked furs, embroideries inspired by the orient and India, decoration in abundance. All are present, endlessly mixed, but given the nonchalant attitude of today.

The palette is muted: bitter chocolate and rust, dusty rose, sepia and tobacco, embedded with jewel tones: ameythst, emerald and ruby. Dark tweeds are threaded with peridot green and kingfisher blue, contrasted with supple silks, metallic lamé, and the glimmer of sequins, even for day. The silhouette is long and lean, trousers flaring slightly, shoulders narrow, jackets elongated, coats dusting the calves. Traditional gentleman’s suiting in wool and tweed is combined with jacquards and prints referencing the work of William Morris. Flora and fauna invade classic patterns like polka-dot shirts or fair isle knits, with darting dragonflies and wriggling snakes.

Cavalli’s signature big cat prints are once more in abundance, joined by patterns derived from trompe-l’oeil kimono embroideries, and foulard silks cut into fluid lounging pyjama styles. Those add a hint of loucheness to the wardrobe. They are worn for evening – but never in bed. Roberto Cavalli’s expertise in leather is showcased in patchwork jackets of precious snake, or embroidered calf, the patterned extended to sneakers and chelsea boots embroidered with recreations of the organic prints in leather applique. Fur – faux and real – add touches of unapologetic luxury.

Peter Dundas has always been inspired by the powerful, sensual women to whom Cavalli’s masculine icons are inevitably drawn: he showcases a selection of his pre-fall 2016 Roberto Cavalli womenswear collection alongside the men, further emphasising the unity of the house’s new creative spirit. These models meander through the grandeur of the Palazzo Crespi – a palazzo/casa, or museum-home, its opulent beauty is nevertheless resolutely part of the real world. Just like the wardrobe of the Robert Cavalli man, and woman. 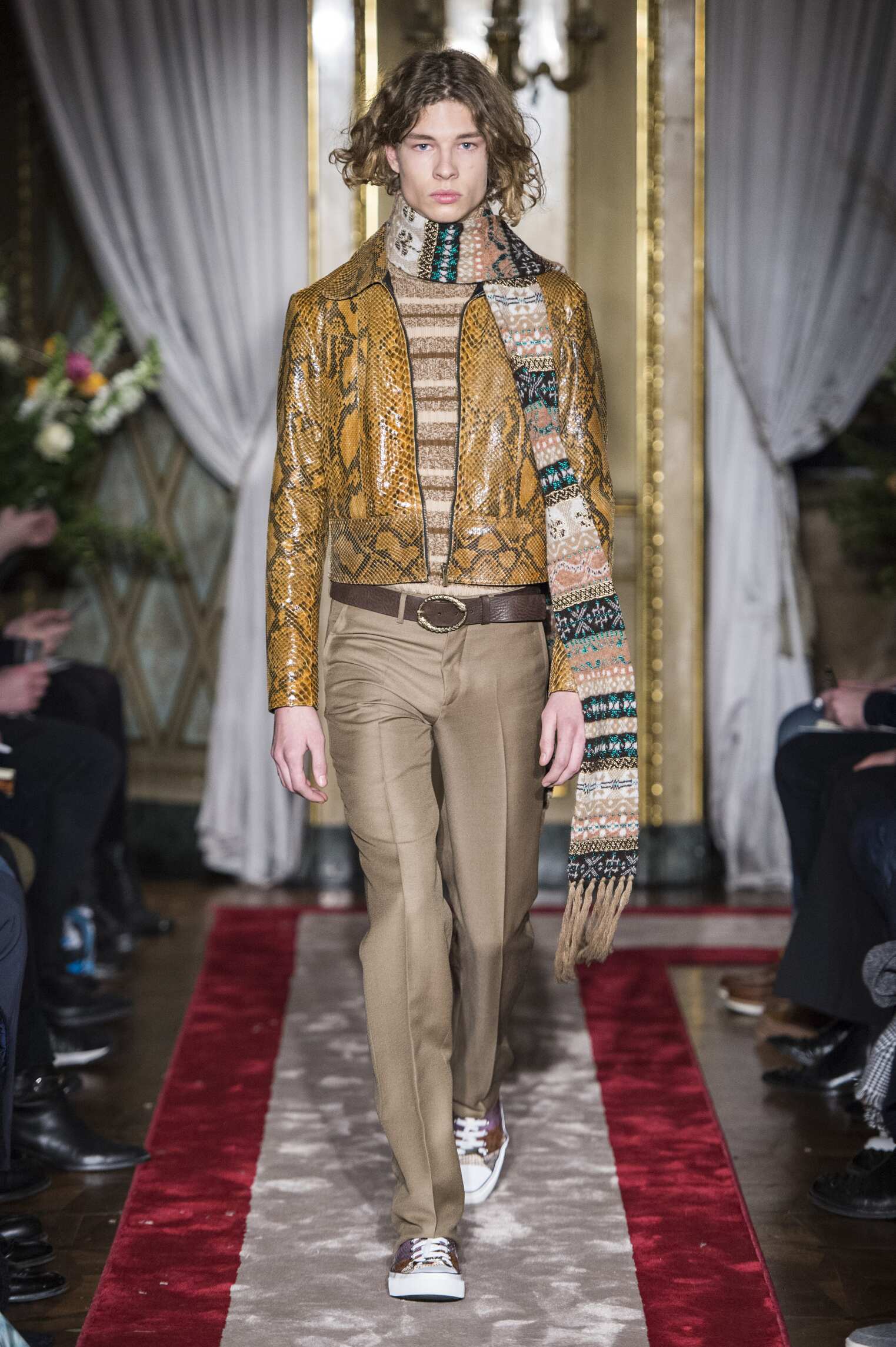 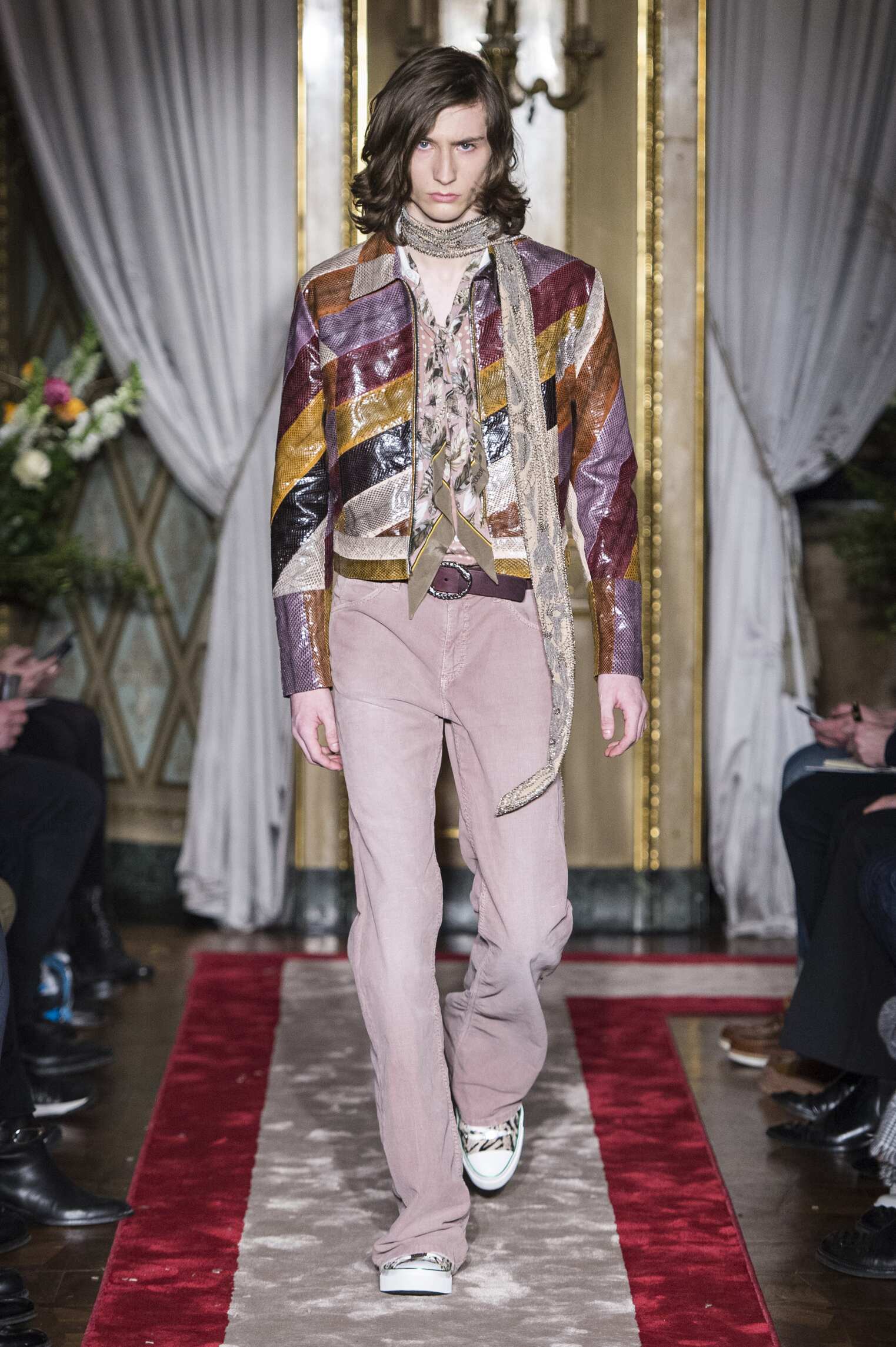 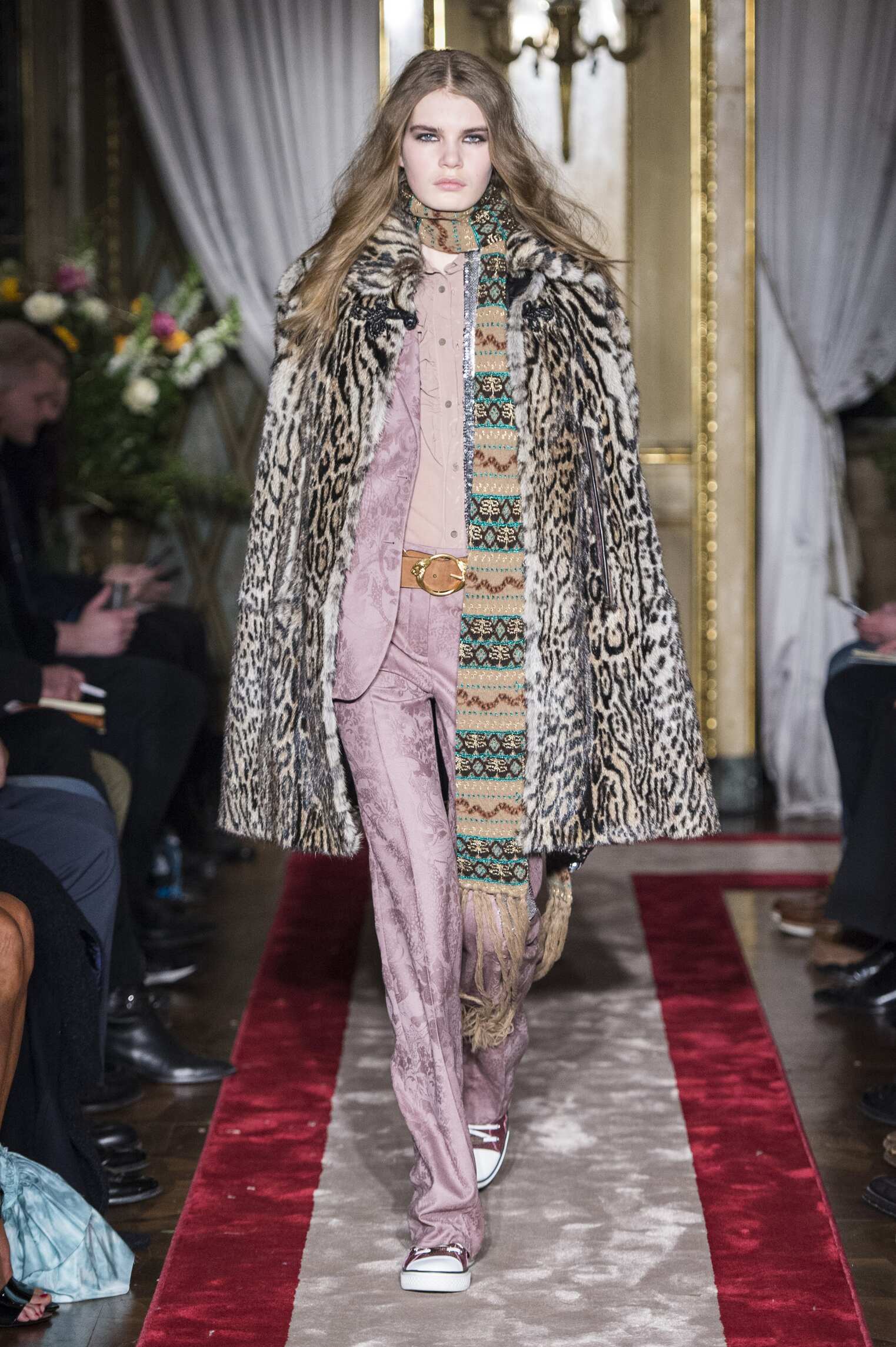 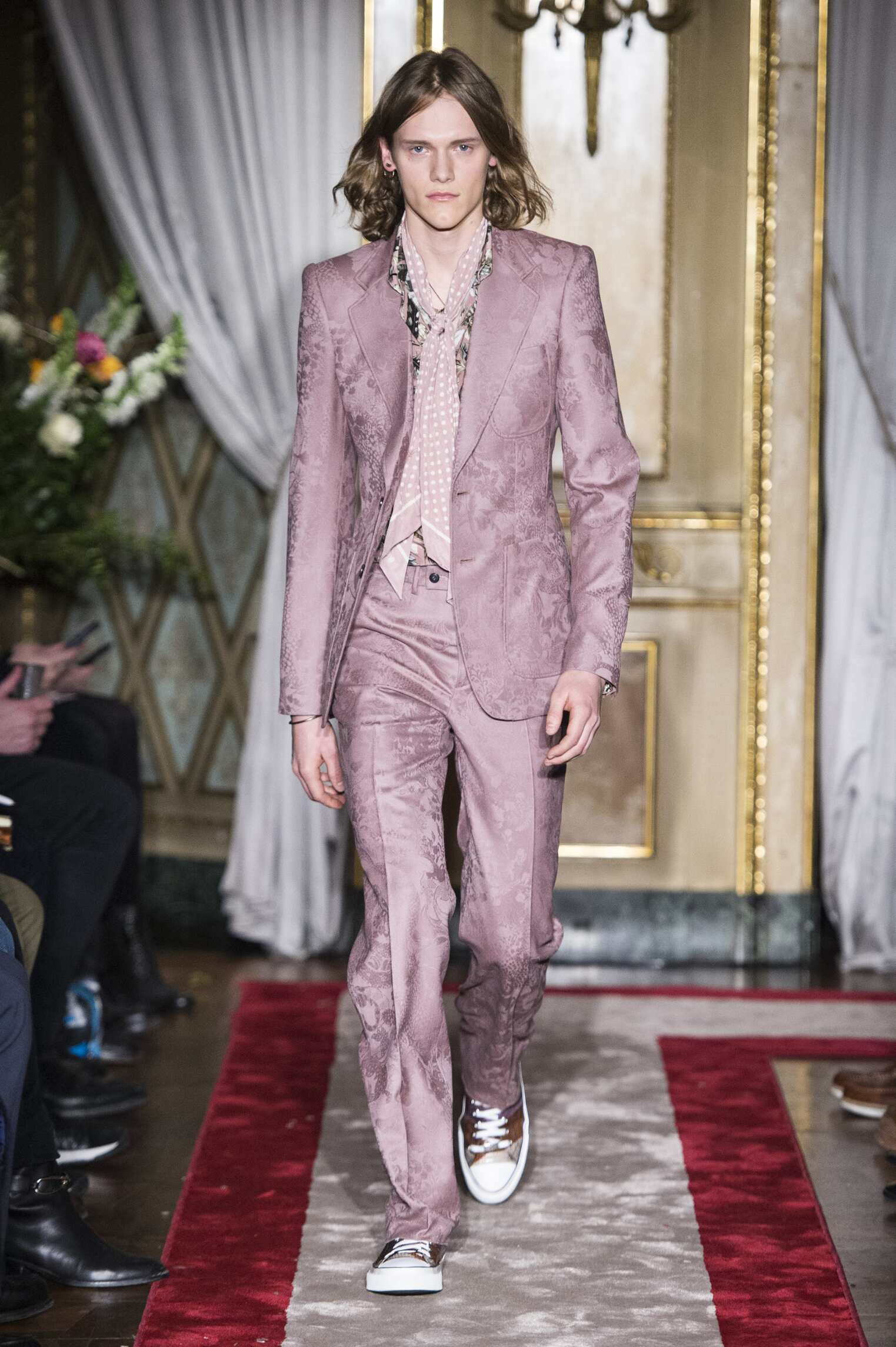 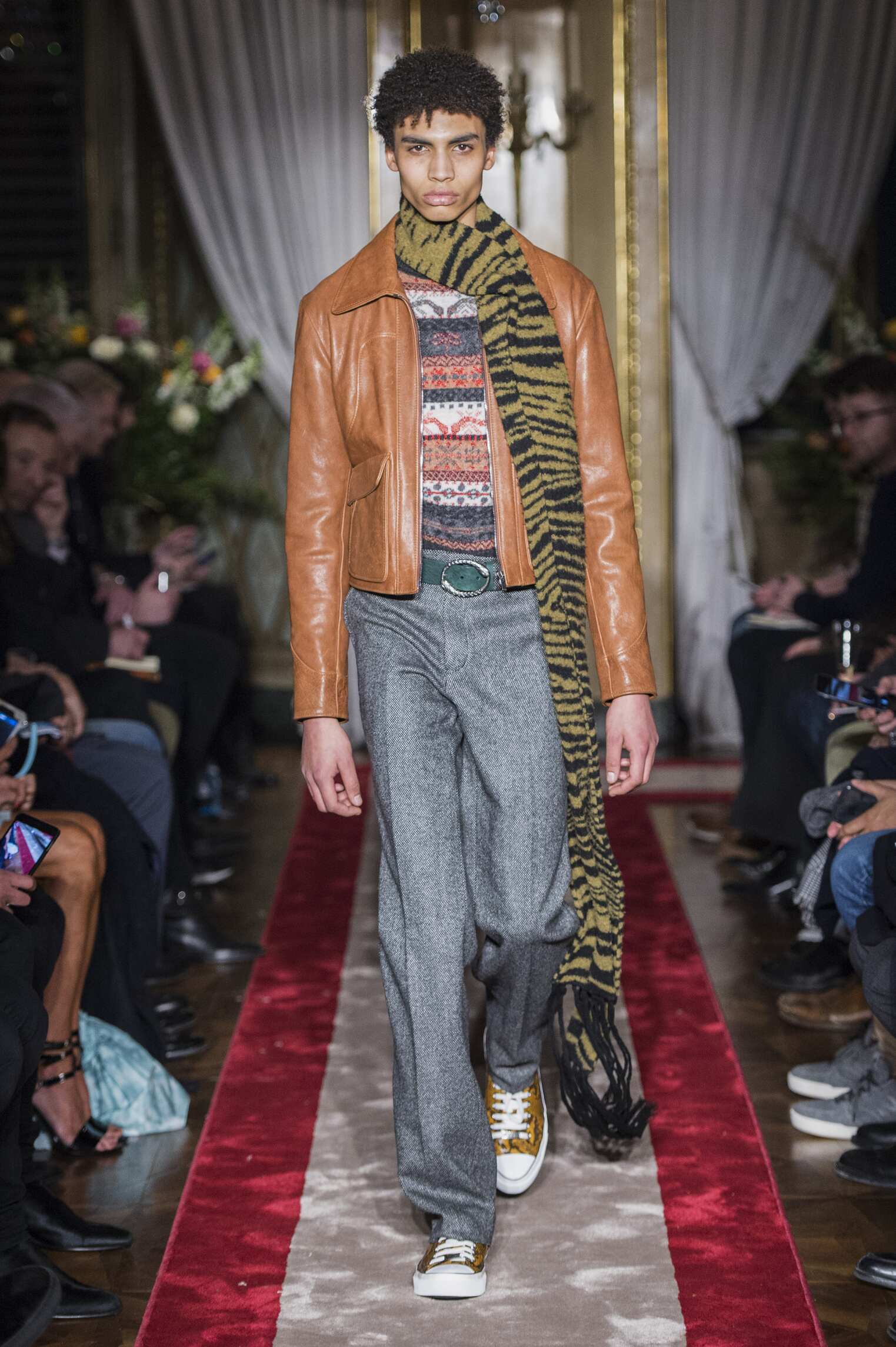